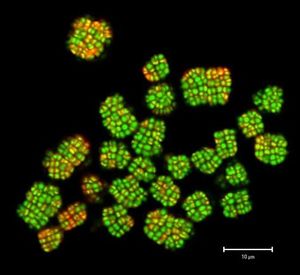 K. radiotolerans was first recognized at the Savannah River Site in South Carolina where scientists were studying decades-old, high level nuclear waste inside tanks. Colonies are orange and round with rough edges while individual cells are coccus shaped, about 1.5 µm in diameter. This pigment color is a result of a carotenoid with absorption peaks at approximately 444, 471 and 501 nm. Kineococcus radiotolerans is a catalase-positive, oxidase-negative, urease-negative organism that normally grows in clusters but on average 1% of the cells are motile due to flagella. Each one of these cells is surrounded by a thick extra-cellular polymer shell. Growth is most abundant with temperatures ranging between 11º and 41º C and with a pH level between 5 and 9.

This bacterium thrives in normally deadly radiation and has incredible survival characteristics in terms of DNA. It has the ability to reassemble its own DNA within five to six hours after being blasted into several little pieces. This is a process that cannot be endured in humans and most other organisms. The mechanisms of DNA repair and radiation resistance in extremely radiation resistant bacteria have only recently begun to be characterized. Colony formation and a large number of genes involved in reactive oxygen species detoxification are thought to help K. radiotolerans.

With this information, hopefully further research will lead to clues that could aid in medical research, cancer studies and environmental bioremediation.

K. radiotolerans’ genome was first sequenced at the Joint Genome Institute (JGI). This genome consists of three contigs: a linear chromosome along with two plasmids, one circular and one linear. Its chromosomal DNA has been completely sequenced. The length of the chromosome is approximately 4.8 Mbp with a 74% GC content. The linear plasmid has a length of 182,572 base pairs while the circular plasmid only has a length of 12,917 base pairs. The genome codes for roughly 4,700 genes and has a unique mechanism that protects the telomeres of the chromosomes. The completed genome sequence achieves an average of 14-fold sequence coverage per base with an error rate less than 1 in 100,000.

K. radiotolerans grows in large tetrad clusters of nonmotile cells surrounded and connected by a thick, slimy, extracellular matrix. Sphereical zoopsores, approximately 1 µm in diameter, with a single flagellum are also produced. The morphohology of mature colonies is similar to that of Mycobacterium tuberculosis.

K. radiotolerans utilizes glycolysis, the pentose phosphate cycle, the tricarboxylic acid cycle and glyoxylate bypass pathways to utilize carbon for energy. It is also thought that the pentose phosphate cycle and the glyoxylate bypass may both be involved in radiation resistance and post irradiation recovery by minimizing the production of damaging oxygen radicals and by producing biosynthetic metabolites. Copper has also been found to greatly increase the metabolism of K. radiotolerans during ionizing radiation [6].

K. radiotolerans was isolated from the Savannah River Site in Aiken, South Carolina. The bacteria was isolated from the metal floor of a shield cell work area where the average level of gamma-radiation is 0.18-3.5 Gy/h. K. radiotolerans is culturable on PTYG medium (a medium supplemented with peptone, yeast extract, glucose, tryptone, calcium chloride, and magnesium sulfate, pH 7.2). It can grow at salt concentrations up to 5% and grows optimally at 32 °C. The bacteria is also highly resistant to desiccation [4].

While typically exposed to only moderate doses of radiation, K. radiotolerans can withstand up to 20 kGy of gamma radiation. Gamma radiation is one of the most high-energy forms of radiation and is highly deadly to most species in even small amounts. Gamma radiation causes cellular damage by creating double stranded breaks (DSB) in DNA and by ionizing water to form free radical species. In humans, anything greater than 8 Gy is fatal (1 Gy = 1 Joule of energy deposited per Kg of tissue). [1]

Kineococcus species are most commonly found in arid environments on weathered rock, stone monuments, paintings, desert crust or varnish. Since high levels of radiation do not occur naturally on the earth it is likely that their resistance to radiation did not develop for that reason, rather it was their evolutionary response to dessication which conferred them this resistance.

Since few species can withstand even moderate levels of radiation, it is unlikely that K. radiotolerans would have the chance to form any kind of a relationship with another species in the environment from which it was isolated. Other species of Kineococcus, however, have been found growing alongside cyanobacteria and fungi which together form biotic crusts, lichens, or endolithic communities [5]. Both cyanobacteria and fungi release formate and oxalate which could potentially be used by the Kineococcus for respiration.