A Microbial Biorealm page on the genus LRMoore, Univ of Southern Maine 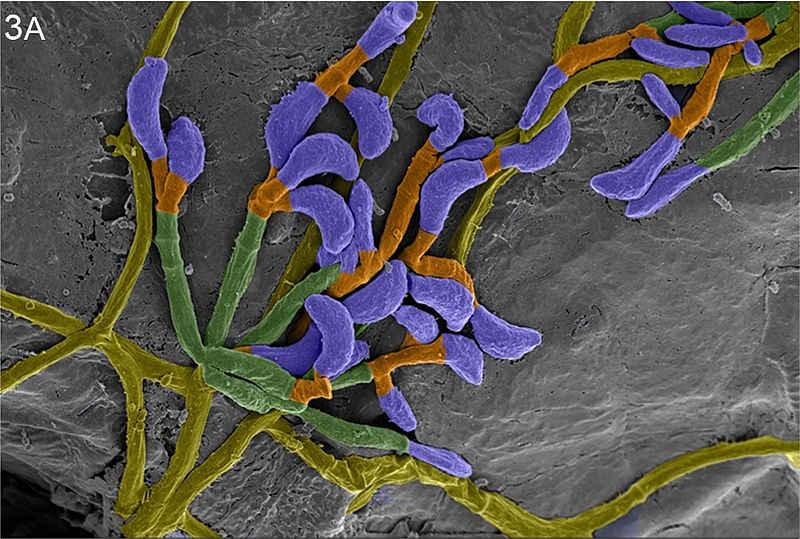 Borrelia recurrentis is the causative agent of louse borne relapsing fever (LBRF) and is closely related to the bacteria B. duttonii, the source of tick borne relapsing fever. A recent genomic study of the two strains of bacteria found that B. recurrentis is actually a subset of B. duttonii in which the genes of the latter underwent a decaying process that gave rise to B. recurrentis. This process could be due to the inactivation of genes encoding for DNA repair mechanisms (recA and mutS), causing an accumulation of errors in the genome [5]. B. recurrentis is the cause of systemic inflammatory disease, characterized by one to five fever relapses, distinctive hemorrhagic syndrome, a high rate of spontaneous abortion in pregnant women, and a 2-4% mortality rate despite modern antibiotics. B.recurrentis is unlike its counter part (B. duttonii), which produces more relapses and a lower mortality rate [5,6].B. recurrentis is a slender, pathogenic spirochete whose habitat is usually associated with humans and is vector borne via lice. LBRF was once a world wide epidemic, but over the last century has since been eradicated due to better personal hygiene and way of living [1]. Now the disease is prevalent in areas that have major lice problems such as the Andean foothills, the highlands of eastern Africa, southern Sudan, and Rwanda [1,2]. The lice become infected by feeding on humans that are infected by the spirochetes. When the lice are transferred to another human, the infection spreads by the contact of the hemolymph (the fluid found in the circulatory system of arthropods) with abraded skin. This contact can occur by scratching, which then opens the skin and crushes the body of the lice, exposing the hemolymph. New evidence suggests that another means of infection can occur through contact with infected feces [2,4].

According to JGI Genome encyclopedia, the fully sequenced bacteria Borrelia recurrentis has a genome with 1025 genes and 1,242,163 base pairs which contain 8 linear fragments ranging from 6,131 bp to 930,981bp [3, 5].This is quite atypical of prokaryotes since they are normally seen having a single, circular chromosome. B. recurrentis contains a linear chromosome with a size of approximately 1Mb (27.5 GC%) along with both linear (7) and circular plasmids. All strains contain one large plasmid anywhere from 183 to 194kb as well a small one (11kb). Strains have 5 main differences in the pattern of the other plasmids, which range in size from 25kb to 62kb [2].

Electron microscopy has revealed B. recurrentis as a spirochetal cell with pointed ends containing 8-10 periplasmic flagella, an average wavelength of 1.8 pm and an amplitude of 0.8 pm (fig 1)[2]. Because of the flagella, this is a motile bacterium which leads to greater spreading in the bloodstream of the host. Contrary to most pathogenic bacteria, B. recurrentis is gram negative.

This microaerophilic microbe is also mesophilic (it prefers moderate temperatures of 68-113o F), where the human host provides perfect conditions for the bacteria to thrive [3]. It is also an auxotroph for most amino acids, meaning that it is unable to produce them itself and absorbs them from the environment instead [3].

B. recurrentis is known for its inhabitance in human hosts and has only successfully been able to infect primates.

These spirochaetes normally cause a blood infection but they can also infect the nervous system along with other tissues [5]. There are no known virulence factors, but there are a few novel ways that this sneaky pathogen evades the host immune system [5]. The body has its way of recognizing and enhancing the recognition of foreign invaders called opsonization, which targets them for destruction through a cascade of reactions known as the complement system. Recent studies show that B. recurrentis expresses a multifunctional surface lipoprotein, termed HcpA, that exploits the host’s proteins and offers resistance to complement attack and opsonization while increasing the potential to invade the host’s tissues [6]. Since HcpA outlines the high virulence potential of B. recurrentis, it makes a good target for therapeutic treatment of LBRF, however, none have been created yet. It was also found that this spirochete binds to the PLG(human plasminogen/Plasmin) receptor on endothelium cells and exploits their increased proteolytic capacity to breach tight junctions of endothelium, cross basement membranes, and to initiate patho-physiological processes in the affected organs [6]. Another novel approach is its ability to undergo antigenic variation, meaning that once the innate immune system is able to identify and start fighting off the first antigenic type, another antigenic type appears. This impairs the host immunes system from being able to clear the infection and explains why there are multiple recurrences of fever [6]. To treat LBRF, tetracyclines and penicillins are commonly used and are usually quite effective; however they may cause a severe Jarisch-Herxheimer reaction, which can be fatal [1] . This reaction causes fever, chills, rigor, hypotension, headache, tachycardia, hyperventilation, vasodilation with flushing, myalgia (muscle pain), and exacerbation of skin lesions because the death of the bacteria causes the release of harmful endotoxins faster than the body can get rid of them.