A Microbial Biorealm page on the genus Lactobacillus brevis 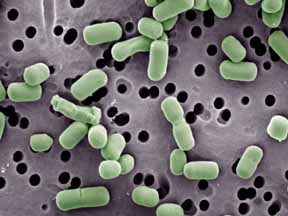 Lactobacillus brevis is a species of lactic acid bacteria, all of which are Gram-positive, non spore forming organisms whose main metabolic pathway involves fermenting hexose sugars to produce lactic acid. 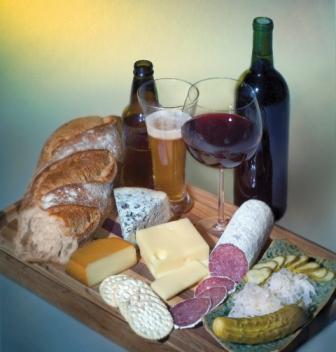 L. brevis plays a large part in the fermentation of wine and cheese (8)

The significance of all lactic acid bacteria throughout history up until today is their metabolism which is used for the preservations of foods and beverages. Despite a simple metabolic pathway, lactic acid bacteria play a prominent part in the world’s food supply and production of some beers and wine. Along with other lactic acid-producing bacteria, L. brevis plays an integral role in the fermentation of certain foods such as sauerkraut and pickles and is likewise the most common cause of spoiled beer. In fact, in Germany at one point, more than half of beer spoilage incidents were due to L. brevis alone.(9) L. brevis can be isolated from the food sources in inhabits, one example being kimchi.

The importance of L. brevis’ sequenced genome, is that integral proteins and enzymes can be isolated and used in experiment such as observing strains of hop-resistant lactic acid bacteria in beer spoilage or isolating decarboxylase DNA that can be cloned and inserted in other chromosomal DNA to encode novel proteins for that strain.

Whole-genome sequencing was conducted at the U.S. Department of Energy for eight other species of Lactic acid bacteria. The method used was shotgun sequencing, where different parts of a genome are sequenced and then the pieces were assembled. The completed sequenced genome of L. brevis shows that this bacteria is circular and has one chromosome with a length of 2.3 Mbp containing 2185 proteins and 82 RNAs. Two plasmids are also sequenced, much smaller in length, and have 11 and 12 proteins.(3)

The evolution of Lactobacillales reveals a lot about the heritage of species and the ancestral gene losses, and may suggest where duplications and the addition of new and unique genes occurred. "Phylogenetic analyses, comparison of gene content across the group, and reconstruction of ancestral gene sets indicate a combination of extensive gene loss and key gene acquisitions via horizontal gene transfer during the coevolution of lactic acid bacteria with their habitats."(3) One notable difference in L. brevis from the other species in this order, includes the loss of genes that carry out the biosynthesis of arginine and aromatic amino acids.

Lactobacillus brevis and the Lactobacilli in general, are Gram-positive, rod-shaped, non spore forming bacteria arranged in singles. This implies a thick cell wall and an inner membrane in its rod shape. Although the sequenced genome of L. brevis is relatively small, the lactic acid bacteria can encode a multitude of different transporters to fulfill the needs of both prototrophic and auxotrophic strains.(3) L. brevis bacteria are aerobe bacteria, they are motile, and probiotic.(4)

Fermentation is the one most common pathway in L. brevis and most other lactic acid bacteria. In this metabolic pathway, sugar (hexoses) is converted to lactic acid by the 6-phosphogluconate pathway, producing also CO2 and ethanol.(2) Energy (ATP) is generated along the way by non-oxidative substrate level phoshorylation. The final product of fermentation, lactic acid contributes to production of such foods as cheese, yogurt, fermented milks and others by inhibiting the growth of other organisms and lowering the pH of the products. Along the pathway, many metabolic reactions occur, one of them being the breakdown of milk products for cheese production. L. brevis specifically is used in industrial production to act as a starter culture for several types of beer and sourdough bread.(4)

Lactobacillus brevis is mainly found in food. Environmentally, it can be found on dairy farms in raw milk, especially in bovine feces; however it rarely teams up with eukaryotes in a symbiotic way.(10) Mostly it is found in proximity with other lactic acid bacteria, in a variety of foods. Most commonly these bacteria live in the food where they perform their metabolic pathways. Some major users of lactic acid bacteria include wine, salami, cheese, sourdough bread, pickles, yogurt, cocoa, and coffee. L. brevis specifically accommodates production of sour food.(8)

One of the most interesting interactions is that with the human intestinal flora. Lactobacillus, when ingested, has probiotic effects as it improves the immune system.(8)

Also, currently there are studies and research conducted on L. brevis and other lactic acid bacteria for incorporation into bio fuels and other environmental friendly and efficient materials.(8)

L. brevis is not a pathogen and there are no cases where it has caused or contributed to disease in humans.(4) In fact, it is the other way around. This bacteria is probiotic, and improves the human immune system.(8)

L. brevis is hop-resistant, a compound that causes beer spoilage. This strain of bacteria is easy to study and research because its optimal growth conditions are known; fastest growth is at 30 degrees Celsius and at a pH of 4-6. Only a few strains of L. brevis are not resistant to hop compounds.(9) Another source reveals that when DNA PCR analysis was conducted on Lactobacillus brevis strains found in breweries, a primer was isolated that can lead to distinguishing spoilage and non-spoilage strains of the lactic acid bacteria. This primer fragment was named hitA, and it can encode proteins that are responsible for a non-ATP binding membrane transporter which has been seen in both prokaryotic and eukaryotic species. In a hop bitter environment, the membrane is disintegrated due to a sensitive pH gradient, and H+ is exchanged for divalent cations, Mn2+ being an example. The experiment concluded that the hitA gene could be responsible for making products that are hop bitter resistant due to the introduction of metal ions which in essence destroys the intact proton gradient.(11)

1. "Proteomic approach for characterization of hop-inducible proteins in Lactobacillus brevis"

In order for lactic acid bacteria to cause beer spoilage during growth in beer, they must have a resistance to hops. A bacterial hop compound is also known as an ionophore which by definition is a small molecule whose main purpose is to transport ions through the lipid bilayer of a cell’s membrane. In the experiment, two strains of Lactobacillus brevis (TMW1.465 and variant TMW1.465A) were observed and the acid stress response and hop adaptation caused many detectable changes in the cells’ properties. To more clearly identify the cause of the changes in metabolism, membrane physiology, and cell wall composition, the scientists set up an experiment to identify related vital proteins despite the disadvantage of an incomplete genome sequence. Conclusively, hop resistance in the variant strain implied altered mechanisms that accounted for intracellular acidification, and changes in mechanisms that dealt with energy generation, genetic information, and enzyme functionality. Enzymes that are hop-regulated were also defined as being manganese or divalent cation dependent. Thus the ability to control the manganese level leads to the ability to tweak the metabolisms of applicable cells. One change found in metabolism in response to an environmental stress condition, was the shift into an energy-saving mode. Lastly this experiment demonstrated that bacteria in a hop stress environment were correlated with the depletion of proton motive force and with a limitation of the divalent cation, which as mentioned above is needed for hop-regulated enzymes. (5)

A new strain of Lactobacillus brevis containing 84.292 mg/L/h of GABA (γ-aminobutyric acid) was isolated from a Korean fermented food, Kimchi. Lactobacillus brevis OPK-3 was found to have a core fragment of glutamate decarboxylase (GAD) DNA and this fragment was then isolated, cloned, and amplified (by method of PCR) to end up with a full-length piece of core GAD DNA and enough data for a nucleotide sequence analysis. The scientists found the open reading frame (ORF) of the DNA contained 1401 bases and had the ability to encode 467 amino acids for protein assembly. The molecular weight was found to be 53.4 kDa. When compared to the amino acid sequence of other Lactic Acid Bacteria GAD DNA, Lactobacillus plantarum GAD, Lactococcus lactis GAD, and Listeria monocytogenes, the LbGAD ORF was 83%, 71%, and 60% identical, respectively. Further in the experiment, the LbGAD gene was introduced into an Escherichia coli strain (UT481), and when the transformed E. coli was tested, a 53.4 kDa protein was apparent, and the bacteria also had heightened GAD activity. (6)

In this experiment, researchers observed changes in lactic acid bacteria and in the chemical composition of Zlatar cheese, over the course of 60 days during which it was ripening. This cheese was produced from only nonpasteurized cow’s milk without any bacterial aid. The results were very interesting; it was found that the while the number of lactobacilli was slowly increasing over the 60 days, the percentage of cocci first decreased, and then began increasing again at the 30 day mark, eventually catching up with lactobacilli. Also, it was found that out of all bacteria, 57 isolates showed antimicrobial activity and were decreasing with cheese age, until no more was detected in samples of 60 day old cheese. In doing replication - PCR analysis, Lactobacillus brevis was found to be one of the main species of bacteria present in addition to Lactobacillus paracasei, Lactococcus lactis, and Enterococcuus faecium. (7)

Edited by Ekaterina Magonova of Rachel Larsen and Kit Pogliano