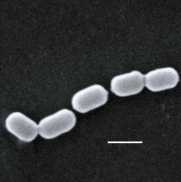 Lactobacillus gasseri, like the other members of the Lactobacillus genus, is an anaerobic, gram-positive bacterium that falls into the category of lactic acid bacteria. It is also a rod shaped and of the non-spore-forming type. It is typically found in the gastrointestinal tracts of humans and animals due to its largely fermentative function (1,2,3). Although mainly in the GI tract, it can also be found in many other places as well (see Ecology).