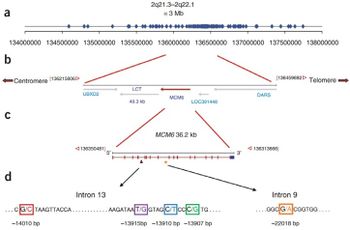 Lactase, also known as 𝜷-Galactosidase, is an enzyme that cleaves the glycosidic bond found in the sugar lactose, a sugar which is found primarily in dairy products. In order to best understand its function, it is helpful to know more information about the substrate it acts on, lactose.

As for its structure, Lactase is a tetramer, which means it is an enzyme which is made up of 4 subunits, each of which are identical. These subunits consist of 1023 amino acids each, which are bound together via ribosomal peptide bonds. These subunits together form an active site which binds around the glycosidic bond between glucose and galactose, allowing for these monosaccharides to be separated.[7]

Section 3: Effect of the Microbiome on Lactose Digestion

Another relationship between the microbiome and the digestion of lactose is potentially more beneficial to those with lactose malabsorption. Recent research suggests that the composition of a person's microbiome may affect their ability to digest lactose to an extent. Though the sample study is notably small at eight, it seems that, in part, transplanting certain beta-galactosidase expressing cultures (Such as Lactobacillus acidophilus) may, in fact, reduce the severity of the symptoms associated with lactose intolerance. Because of this low sample size and the incredibly early state of research on this topic, however, it is not proper to draw conclusions of correlation or causation at this time[9]

In addition to these previous lactase-dependent relationships, bacteria in the gut microbiome also act as the main driver of the symptoms of lactose intolerance. This occurs when lactose is fermented by bacteria native to the small intestine. This can result in the buildup of bacterial colonies, and gases like hydrogen and methane that arise as a result of lactose fermentation. This buildup often cause symptoms such as bloating, indigestion, cramps, and flatulence due to excessive amounts of these gases. In fact, a popular way to test for lactose malabsorption is to study the concentration of hydrogen gas that a person emits via respiration after consuming lactose. These symptoms which result from lactose malabsorption are collectively known as the condition lactose intolerance. [10]

In conclusion, Lactase Tolerance is a mutation which has proven to be wildly important for the proliferation of humanity into areas that would otherwise lack the caloric abundance to do so. The myriad ways by which it arises in different populations provide an interesting case study in convergent human evolution because of the truly impressive number of ways in which the phenotype can be brought about. Still more interesting are the interactions between lactose tolerance and the microbiome, which, while still in early stages of research, provide an interesting view of the adaptability of micro fauna and the ways in which that adaptability may be able to be exploited for medicinal purposes. Even though research is ongoing, it may well be the case that this relatively simple phenotype can teach us important lessons in the fields of genetics, microbiology, and evolutionary history which can then be applied to more complex phenomena.