Legionnaires disease is a type of pneumonia caused by the pathogenic proteobacterium Legionella pneumophila. L. pneumophila are motile, aerobic, non-spore forming, Gram-negative rods that reside in freshwater complexes with high algae and amoeba count. [1] Transmission of the pathogen generally occurs through contaminated water droplets in the form of mist or aerosol particles. However, most people exposed to the pathogen never develop any symptoms of the disease. Those who are susceptible to the illness typically include immunocompromised patients, adults over the age of 50, and heavy smokers. Symptoms of Legionnaires are indicative of other types of pneumonia and include severe high fever, chronic cough, shortness of breath caused by a build up of fluid in the lungs, and extreme malaise. If contracted, patients are often hospitalized; however, the mortality rate is low due to the pathogen's susceptibility to fluoroquinolone antibiotics. Treatment of Legionnaires disease typically takes between 7-10 days after the initial start of antibiotic treatment; however, it has been known to take up to 21 days in immunocompromised patients. Immunocompromised infants and elderly adults should avoid public water systems that have not been properly sanitized in order to prevent contact with Legionella pneumophila. [2]

Legionella pneumophila can also cause a much milder illness known as Pontiac Fever. Symptoms of this illness are similar to Legionnaires disease, but tend to be not as severe. Hospitalization is usually not required and symptoms usually only last around 2-5 days. There are no known antibiotic treatments for Pontiac Fever, as symptoms usually reside on their own. [2] 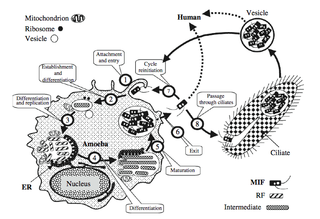 Legionella pneumophila survive and thrive in warm, damp environments, typically those that have a high amoeba count. This includes full bodies of freshwater, soil, and various areas of fresh dirt [3]. There are only two known hosts of the pathogen: amoeba and humans. L. pneumophila will invade a freshwater amoeba and inhibit phagosome-lysosome fusion, and begin to replicate in the ribosome. Once replication is complete, it will exit the now wasted amoeba and reside in the aerosol (or mist) of the freshwater system ready to be inhaled by a human host. [4] Optimal growth of the bacteria is 28-40°C, but the bacteria does not survive past 60°C [1]. Because of the high temperature in which the bacteria are able to survive, man-made public water systems such as showers, hot tubs, and fountains are the perfect place for L. pneumophila to thrive. [3]. The transmission of the bacteria can come from a mist or vapor emitted from a fresh water system that has not been properly disinfected. [2] The bacteria, however, cannot be spread through person-to-person contact, unlike other forms of pneumonia. [2] Many people that are exposed to the L. pneumophila do not develop any symptoms; therefore, those that surround an infected person in a work or school place are not at risk of developing the disease [2]. 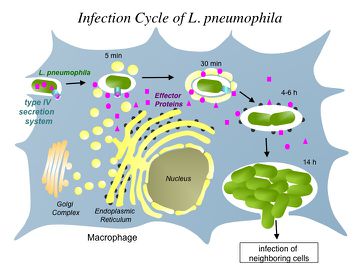 Pathogenesis of L. pneumophila From: National Institute of Health [4]

Although the infectious dose of Legionnaires disease is unknown, there have been many studies that have indicated that as little as one-colony, even one organism, of L. pneumophila has been thought to cause an infection in susceptible, immunocompromised people. [5] The disease is not easily spread, as it cannot be contracted through person-to-person contact. The incubation period of Legionella pneumophila that causes Legionnaires disease is approximately 2-14 days after being exposed to the pathogen. The strain of L. pneumophila that causes Pontiac Fever has an incubation period of around 30 to 90 hours. Although pontiac fever presents with much milder symptoms, those infected typically begin to experience signs of the illness much sooner than those infected with Legionnaires disease. [6] Many people exposed to the pathogen, however, never experience any signs of infection due to the body's ability to fight off the pathogen so readily.

While Legionnaires disease can be found worldwide, the most common places for infection are the United States, Canada, Australia, parts of Asia, and Europe [7]. There are approximately 8,000-18,000 cases of Legionnaires disease reported in the United States alone each year, and there are many cases that remain unreported. [1] Although the disease can be contracted sporadically throughout the year, the peak season for the pneumonia is June-October. The humidity and warm, wet climate found in during these months tend to be optimal living conditions for L. pneumophila, causing the number of bacteria to increase [7]). Legionellosis is known to be the cause of 5-15% of community-acquired pneumonia [7]. The disease usually occurs in adults over the age of 50, and the ratio of men to women affected is 4:3. [7]

The largest known outbreak of Legionella acquired pneumonia was in July 1976 in Philadelphia. Approximately 182 people were infected, 147 required hospitalization, and of those, 29 people died. The source of the outbreak has been linked to the cooling towers at the Bellevue Stratford Hotel. The bacteria is believed to have been colonized in the cooling towers and distributed amongst the guests at the hotel through the air conditioner units. [4]

Legionella pneumophila uses a Dot/Icm type IV secretion system (T4SS) in order to invade the host (macrophages) and create signal molecules to trigger growth of the pathogen. After the macrophages have recognized the pathogen and begun phagocytosis, it will release large amounts of bacterial effector protein to the cytosol. This initial step will redirect proteins and create a compartment-like vesicle similar to that of the endoplasmic reticulum of the cell. [8] The compartment created by the Legionella is known as the Legionella-containing vacuole, or LCV. Through the LCV, the pathogen is able to prevent recruitment of any help to the cell, which gives L. pneumophila free range to replicate. The Dot/Icm secretion mechanism is crucial in the pathogenesis of the organism. Without this virulence factor, Legionella are considered to be non-pathogen because they are unable to create the vacuole, and therefore, inhibiting pathogenic growth. [9] 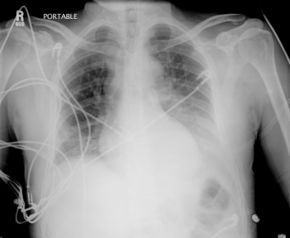 Many of the symptoms of Legionnaires Disease are characteristic of pneumonia. Symptoms typically begin with a shortness of breath followed by a cough. A high fever, headaches, muscle aches, and malaise are other symptoms that occur with pneumonia caused by Legionella pneumophila. [10] Signs of symptoms can appear 2-14 days after being exposed to the pathogen. Many people that come into contact with Legionella pneumophila do not show symptoms. Legionnaires disease can be found in anyone; however, it is usually found in patients over 50, heavy smokers, and immunocompromised patients. [10

Due to the very low infection rate, the morbidity rate of Legionnaires disease is low as well. About 1-5% of the patients that contract the disease require hospitalization, and those patients that are generally treated and cured through antibiotic treatment. [1] Many factors such as the severity of the disease, the age of the patient, and how quickly the patient begins antibiotic treatment all contribute to the survival rate of the patient. [13] The mortality rate of Legionnaires disease is approximately 5-30% [13]. An increase in knowledge and awareness about how Legionellosis is spread has allowed the mortality rate to drop drastically worldwide in recent years. [13]

On the surface, Legionnaires disease is difficult to differentiate from other types of pneumonia, there are multiple simple tests that can be run in order to determine if the symptoms are caused by Legionella pneumophila. One of the most effective and efficient tests is a urine antigen test. [2] Urine antigen tests take approximately one hour to detect the antigen produced by L. pneumophila and is 98-100% specific [2]. There are, however, a number of serotypes that cannot be detected in a urine sample. Other options in diagnosing Legionnaires disease include culturing blood or patient's sputum or detection of the pathogen in respiratory secretion through a fluorescent antibody test [2].

There are approximately 8,000-10,000 Legionnaires disease patients that are hospitalized each year in the United States alone [1]. Nevertheless, Legionellosis can be easily treated with the proper dosage of antibiotics. For milder cases, broad-spectrum antibiotics are sometimes accepted as a choice of treatment [4]. For cases in which the patient experiences much more severe symptoms, a combination of Rifampicin and Erythromycin can be used. However, various types fluoroquinolone drugs are the most common and most effective way to treat Legionnaires disease [4]. The use of fluoroquinonlone removes the need for Rifampicin therapy, and is therefore more efficient because only one antibiotic is required [4]. Many other strands of pneumonia are often treated with Beta-lactam antibiotics; Legionnaires disease, on the other hand, does not respond to Beta-lactam drugs [4]. Treatment typically lasts between 7-10 days after the initial dosage of antibiotics. In immunocompromised patients, treatment has been known to take up to 21 days to clear the infection. (Canada?) 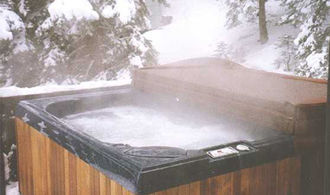 Maintaining proper care of public water systems, like hot tubs, can help prevent the spread of L. pneumophila
From: legionellaprevention.org [6]

Legionnaires disease is not a huge threat to society as a whole, due to the fact that the disease has no known cases spread through person-to-person contact. Therefore, there is no risk involved if contact is made with an infected person. [6] However, there are some factors than can be avoided that may place a person at risk for the initial onset of the infection. Adults over the age of 50 should be mindful of their health and keeping their immune system strong. Avoid smoking (as well as cigarette inhalation from secondhand smoke) as well as drinking large amounts of alcohol. [4] Other precautionary measures that could be in place are to make sure all public water systems are throughly cleaned, disinfected, and sanitized to keep L. pneumophila from colonizing the aerosol of the water supply. [6]

Unlike the pneumococcal pneumonia illnesses, there is currently no vaccine or any type of immunization for Legionnaires disease. Because Legionnaires disease affects very little of the population due to the ability of a healthy immune system to fight off the infection before the presentation of symptoms, there is very little research being conducted to find an immunization for the disease [11]

Legionella pneumophila considered to be an intracellular pathogen, and as such, the immune system responds to the pathogen as a “standard” intracellular pathogen. Due to the fact that L. pneumophila attacks macrophages directly, it is important for the macrophage to prevent growth as quickly as possible. Regulation of proliferation of the pathogen is controlled by proinflammatory cytokines and tends to happen early on in the infection in order to prevent the spread of the disease. In people that are healthy, or have a strong immune system, the immune system is able to fight off the pathogen typically without any symptoms appearing in the host. In an immunocompromised or more susceptible patient, the body is not able to control the growth of L. pneumophila, and this is where people begin to see the onset of symptoms. If the infection is not stopped by the macrophages, the adaptive immune system will begin to go into effect. T helper 1 cells will express IFN-γ and IL-12, which will help to prevent the growth of the pathogen. These cytokines have been known to have elevated levels in blood cultures from patients suffering with Legionnaires disease. [12]

5. Centers for Disease Control and Prevention (CDC). Top 10 Things Every Clinician Needs to Know About Legionellosis. Available at http://www.cdc.gov/legionella/clinicians.html#footnotes

Created by MaKenzi Burke, student of Tyrrell Conway at the University of Oklahoma.