A Microbial Biorealm page on the subgenus Leishmania 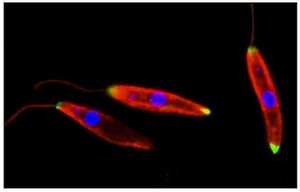 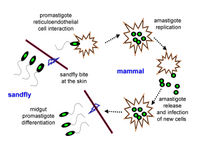 Leishmania 's promastigote form (found in the vector) is similar to the amastigote, but possesses a prominent flagella. The surface membrane has binding site molecules such as glycoproteins, and manose receptors have also been detected. These are important in the uptake of the promastigotes by macrophages in the host cell. Antibodies in the host serum bind to the promastigotes and facilitate uptake and entry into the macrophage. The macrophages have Fc receptors on their surface. Upon losing the flagella (see life cycle, below) Leishmania's amastigote form (found in the cells of the vertebrate host) is spherical and is contained within a parasitophorus vacuole within a macrophage. There is a prominent nucleus and kinetoplast, and the vacuolated cytoplasm contains lysosomes. The outer membrane has a polysaccharide component but there is no surface coat.Once inside the host cell, Leishmania is able to protect itself from powerful host immunities by using several unique defense mechanisms, including its rapid cell division. Leishmania is a heterotophic organism whose prominent flagella may allow it to puncture host cells, allowing the promastigote to consume nutrients and obtain energy from the cell sap. A newly discovered hybrid of Leishmania (Viannia) braziliensis and Leishmania (Viannia) peruviana was recently identified in Peru. Transmission of the hybrid parasite was attributed to Phlebotomine Sand Fly species, Lutzomyia tejadai and Lu fischeri.