Difference between revisions of "Leptospira"

A Microbial Biorealm page on the genus Leptospira 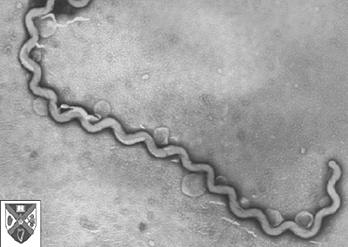 *It should be noted that a recent study has concluded that based on the analysis of the G+C content, DNA-DNA relatedness to other leptospires and 16S rRNA gene sequence of Leptospira parva showed that this species was not related to other Leptospira species, and thus it was proposed that Leptospira parva should be transferred to the genus Turneriella as Turneriella parva gen. nov., comb. nov. Click here for more information.

Leptospira is an aerobic spirochete, the cause of the harmful disease Leptospirosis, which affects many animals and humans.

L. interrogans serogroup Icterhaemorrhagiae consists of a 4.33 megabase large chromosome and a 359 kilobase small chromosome, totaling 4,768 predicted genes. A series of genes have been discovered that could potentially be related to adhesion. This genome differs from the two other pathogenic spirochaetes (Treponema pallidum and Borrelia burgdorferi), though some similar genes are visible (CHGC, 2004).

Leptospira cells elongate as they grow, closing off the fresh ends. Sometimes when under nutritional stress, leptospires over 50 μm long may fail to separate and create elongated chains of leptospires. Leptospira organisms are chemoorganotrophs, using O2 as the electron receptor. Long-chain fatty acids are the sole major energy source, derived through β-oxidation, though they cannot be synthesized. Sugars cannot be used as a source for carbon, though carbohydrates can be synthesized through the tricarboxylic acid cycle (B. Adler et al., 2004).

Leptospira is a unique pathogen because of its ability to grow at temperatures as low as 11-13°C, though the optimum growth temperature is still between 28°C and 30°C. Leptospira grows best at pH levels between 7.2 and 7.6, preferring an alkaline habitat to acidic (B. Adler et al., 2004). Leptospirosis, caused by Leptospira, is found most frequently in tropical or temperate climates (CDC, 2003). 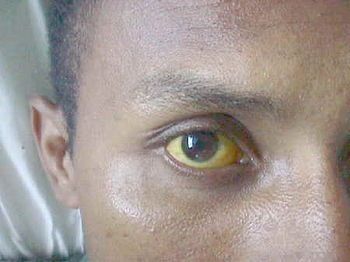 Leptospirosis can cause jaundice. From Michael Lowe.

Leptospirosis, a potentially deadly disease, is caused by the the spirochete Leptospira. Leptospirosis affects both humans and animals, causing a wide range of symptoms in both. In humans, typical symptoms can include fever, headaches, chills, sore muscles, vomiting, jaundice, red eyes, abdominal pain, diarrhea, or rashes. Leptospirosis can become considerably dangerous if not treated, potentially leading to kidney damage, meningitis, liver failure, and respiratory problems. Leptospirosis is typically contracted by humans through water, food, or urine contact with an infected animal (CDC, 2003). It is currently speculated that about one third of infected humans contract Leptospirosis through contact with dogs and about one third from contact with rats (Mar Vista Vet, 2004). 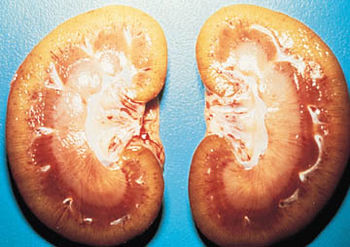 Leptospirosis affects animals severly as well. Once in contact with the disease, the organisms spread through the bloodsteam then settle in the kidneys to reproduce. In dogs, this leads to fever, loss of appetite, joint pain, nausea, excessive drinking, and jaundice. Organ failure can occur as well, especially in the liver (Mar Vista Vet).