Difference between revisions of "Leptothrix"

A Microbial Biorealm page on the genus Leptothrix 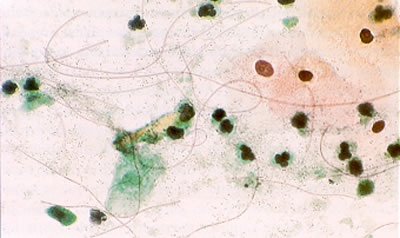 Leptothrix is a sheathed filamentous bacterium that can generally be found in different types of aquatic environments with sufficient organic matter. Leptothrix bacteria are known to be capable of oxidizing both iron(II) and manganese(II), unlike other sheathed bacteria.

No Leptotrhrix genomes have currently been sequenced.

Leptothrix bacteria can vegetatively grow within filaments under the right conditions or grow to form filamentous swarmer cells. These filaments can form sheaths (much like the tubular sheaths that encase the rod-shaped Sphaerotilus bacteria) that may appear yellow, dark brown, or colorless. Leptothrix discophora SS-1 is able to produce biogenic Mn oxides in a chemically defined mineral salts medium; the ability to oxidize manganese sets Leptothrix apart from other sheathed bacteria such as Sphaerotilus that do not have the ability oxidize manganese (Nelson et al. 1998). Leptothrix bacteria, in general, are known to be capable of oxidizing both iron(II) and manganese(II) although they are not known to receive energy out of the process. The products of these oxidative reaction, ferric hydroxide and manganese oxide, sometimes coat the sheaths of the bacteria. This usually happens when the metals are chelated to organic substances: the precipitate attaches to the sheath when the organic molecules are used by the cell. (Virginia Polytechnic Institute and State University) 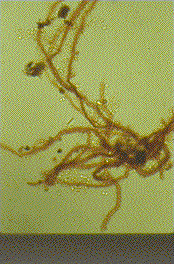 Colonized Leptothrix discophora from the undersides of water lilies. From Virginia Polytechnic Institute and State University. 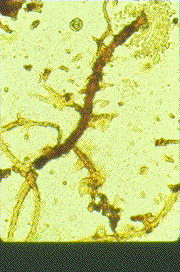 Leptothrix bacteria can be found in aquatic environments that contain sufficient amounts of organic matter. The optimal tempuratures at which they grow are between 10-35oC and a pH of 6.5-7.5. Like some Sphaerotilus, some Leptothrix live in wastewater treatment plants where they may clog pipes and other parts of the system. They can also be grown in certain media that contain iron and manganese coumpounds such as manganese bicarbonate. (Virginia Polytechnic Institute and State University) It was found in a study that Leptothrix discophora SS-1 was able to grow in a defined medium with pyruvate as a carbon source only if vitamin B12 was present. In these conditions, SS-1 could completely oxidize the Mn(II) if it had more than 0.1 micromolars of FeSO4 (Nelson et al. 1998).