Lost City is a hydrothermal vent system discovered in 2000, 15 kilometers away from the spreading center of the mid-Atlantic ridge.[1] Its exact location is near the summit of the oceanic mountain Atlantis Massif at a depth of 900 meters.[2] The Lost City ecosystem is unique in many ways in terms of geology and chemistry, making it quite distinct from the more commonly known black smoker hydrothermal vents and is the only one of its kind currently discovered.[2] Due to the chemistry, the ecology of the ecosystem also varies greatly from other deep-ocean vent ecosystems in terms of relative biomass and biodiversity.[2] Unique features of the Lost City vents further create distinct microbiological communities that are closely tied with the ecosystem’s geography, geology and chemistry.[2]

In contrast to acidic black smoker hydrothermal vents, the Lost City (LC) hydrothermal field is basic ranging from pH 9 – 11.[2] Additionally, because the vents are not at the spreading centre and located at a slower-spreading part of the mid-ocean ridge, the temperature of the fluids is quite low at 40 – 100 °C.[2] In comparison, the extremely high temperatures of faster spreading vents at the spread centre can have temperatures of 300-400°C.[2] The fluid at LC is produced by a different process than that of black smoker vents such that it is of a completely different composition. The process by which the fluids are created is known as serpentinization.[3] Serpentinization is a highly exothermic reaction in which the mantle rock, olivine, is created into serpentine. This process consumes inorganic carbon, magnesium, oxygen, water, and yields methane, hydrogen gas and hydrocarbons.[3]

Additionally, sulfate in seawater can be reduced by hydrogen to produce hydrogen sulfide.[4] This chemistry is unique to LC due to its geographical location. Unlike black smoker hydrothermal vents, LC is situated on exposed mantle rock, allowing for the serpentinization process to abiotically produce of methane and hydrogen gas.[2 5] The products of these geochemical reactions are fundamental to the metabolisms of the microorganisms that thrive there.[2 4]

Due to the basic pH, the calcium rich fluids form calcium carbonate precipitates with the carbonate in the surrounding seawater.[2] This results in the tall, white towers of LC that can be up to 60m in height and also causes inorganic carbon depletion of the environment.[5] The calcium carbonate towers are a highly porous network which allows the fluids rich in reduced compounds like methane and hydrogen gas to seep out.[2] 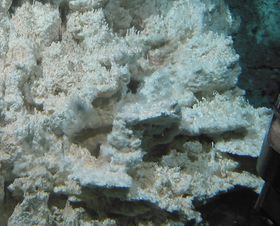 This porous structure gives an extensive amount of surface area, for which archaeal and bacterial mats colonize.[5] Shrenk et al. (2004) gives the first account of the microbial biofilms within these structures based on 16S ribosomal DNA sequencing and other methods to infer what types of microbes and microbial activities are found at LC. Shrenk et al. (2004) describes that the biofilms consisted predominately of archaea, but that eubacteria were also present.[5] Shrenk et al. (2004) found a correlation between the location and presence of archaea and bacteria; a single type of archaea was predominately found within the carbonate structures where they would be completely immersed in hydrothermal fluid.[5] Alternatively, bacteria and other types of archaea were found on the periphery structures where they would be exposed to a mixture of hydrothermal fluid and seawater demonstrating varying niches within the LC ecosystem.[5] Of these organisms, the most common type of archaea present is closely related to organisms in the genus Methanosarcina.[5] Archaea in this genus are methanogens. The oxidation of methane is believed to also occur at LC.[5] The Methanosarcinales relatives severely dominate the inner parts of the chimneys, demonstrating low biodiversity.[5] The challenge faced by these archaea is the highly reductive environment within the chimney structure.[5] The extensive porous network, flow of the fluid and dense biofilm prevent diffusion of electron acceptors such as sulfate and keeps it anaerobic.[5] Additionally, the basic pH disallows access to soluble carbonate, making the LC ecosystem CO2 deprived.[2 5 6 7]

Microorganisms found on the periphery of the carbonate structures are able to access the nutrients of both the seawater and hydrothermal fluid. Shrenk et al. (2004) explains that this is why there appears to be a gradient in the metabolic capabilities of the microbial community.[5] In locations where there is a mixture of seawater and hydrothermal fluid flow, there is an abundance of bacteria and overall higher diversity metabolic capabilities.[5] The bacteria found at LC are close relatives of ε-proteobacteria, γ-proteobacteria and Firmicutes based on 16S rRNA sequencing.[5 6 7] Bacteria such as the Firmicutes relatives may be sulfate reducers whereas ε-proteobacteria and γ-proteobacteria relatives can potentially be methane, hydrogen and hydrogen sulfide oxidizers with use of seawater components like sulfate.[3 5 6 7] Microbial organisms at LC can utilize the abiotically produced methane and/or hydrocarbons as a source of carbon.[7] 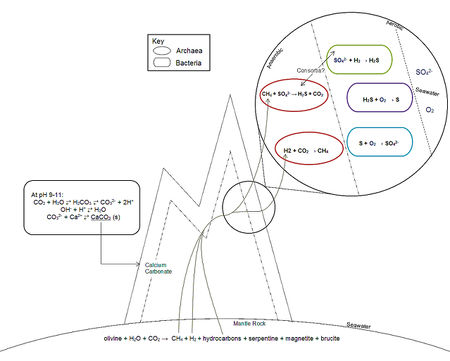 The Lost City ecosystem dependent upon the geochemistry beneath the vents. Proposed metabolisms and microbial relationships in the chimneys.[6]

The organisms at LC experience a very different type of environment due to the unique circumstances in which the environment is formed. For example, the highly reductive environment severely limits terminal oxygen acceptors for the inhabiting organisms.[5 6 7] Though little is known about the actual physiology of the organisms that inhabit LC, Brazelton et al. (2006) proposes that the ecosystem’s core microbial process is sulfur and methane cycling.[6] This proposal is based upon the finding of a wide range of bacteria related to genera capable of sulfur oxidation, sulfur reduction or methane oxidation in addition to the abundance of Methanosarcinales-related archaea capable of methane oxidation and production.[6] Brazelton et al. (2006) uses other ecosystems as an example of the types of microbial relationships that may be present in LC. For example, since anaerobic methane oxidation has only been observed with the coupling of sulfate reduction in other ecosystems it can be hypothesized that a similar archaeal-bacterial relationship in the biofilms at LC mediates the challenge of acquiring electron acceptors.[6]

There is debate about whether the dominating methane-based metabolism is methanotrophy or methanogenesis .[8] Genetic results in addition to observations of cell morphology shows evidence that both processes may be simultaneously occurring at LC.[8] It is also been hypothesized that there is evidence of intraspecial syntrophy, in which closely related organisms have slight metabolic differences and work in concert to utilize the products of serpentization reaction products.[8] This could explain the high dominance of Methanosarcinales-related archaea and the presence of both methane oxidation and production.[8]

Lost city has been active for 30,000 years which is much longer than other vent ecosystems, and has been hypothesized to be the origin of abiogenesis.[1 2 3] Its unique geochemistry resulting from its location on exposed mantle rock is reasoned to provide a hint at how life may have evolved in the early Earth. This is hypothesized because LC may be modeling past conditions of the environment on the early Earth. For example, Brazelton et al. (2010) states that environments based on exposed mantle rock were likely very prevalent in the early Earth and may have been the predominant ecosystems during the formation of life.[7] Other evidence of this is that high pH may have also been a common characteristic of the early Earth.[1 2 3 8]

Additionally, because of the biological dependence of the serpentinization process, LC relates abiotic reactions and conditions to microbial evolution.[4 8 9] The Methanosarcinales biofilm shows evidence of lateral gene transfer of nitrogen fixation genes, something that may have been prevalent in the early stages of life.[8] There is high phenotypic diversity, but low species diversity observed at LC, which could explain the initial stages of evolution by lateral gene transfer after the occurrence of abiogenesis.[8]