Difference between revisions of "Lungs" 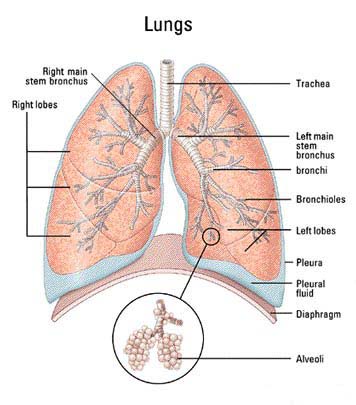 The lungs are one of the two components in the respiratory system, the other being the chest wall. The main function of the lungs is to allow oxygen to diffuse into the bloodstream and for carbon dioxide to diffuse out into the environment [1]. In addition to this, the lungs also have a variety of non-respiratory functions. This includes functions such as altering pH, protecting the heart, and thermoregulation [1]. The lungs are also continually exposed to pathogens entering through inhalation [2]. It is therefore important for the lungs to have defense mechanisms to protect against any foreign matter [2].

Description of The Lungs

There are two lungs in the body occupying the majority of the thoracic cavity; the base sits on the diaphragm and the apex projects above rib 1 [3]. The lung consists of a highly vascularized series of airways and alveoli [1]. This degree of vascularization aids in efficient gas exchange between blood vessels and alveoli [1].

The temperature in the lungs is around 37ºC, equivalent to normal body temperature [4]. The similarity is due to the fact that your body warms the air to 37ºC as it passes through your airways [4]. Breathing in cold air can impair healthy lung functions; can lead to allergic reactions and asthmatic attacks [4].

The pH in healthy lungs is between 7.38 and 7.42, equivalent to the pH of the blood that travels through the body [5]. By altering the concentration of carbon dioxide exhaled the lungs can monitor and maintain pH in the body [1]. Many microbes are sensitive to pH; being unable to survive if the pH is either too low or too high.

At body temperature, 37ºC, the relative humidity of the lungs ranges from 30% to 70%, whereas recommended humidity ranges from 30% and 50% [6]. The relative humidity tends to be higher in the summer [6]. High humidity can cause problems since high humidity lends itself to optimal microbial growth [6]. Humidity is lowest during winter months [6]. Low humidity can be problematic as dry air makes mucous membranes dry, making them more susceptible to infection [6].

Microbes in the lung

Although it is widely believed that the lungs are a sterile environment [7], there are some microbes that can be considered to be part of the normal flora [8]. Some examples are Burkholderia cepacia complex, Chlamydophila pneumonia, Pseudomonoas aeruginosa [8], Aspergillus, Penicillium, and Candida [9].

Burkholderia cepacia complex (BCC) represents a group of nine close related bacteria [10]. BCC is not considered to be pathogenic to healthy people, but they are known to cause respiratory infections in people with cystic fibrosis [10]. BCC’s identification from sputum can often be problematic since it is a relatively uncommon pathogen; therefore microbial tests perform poorly in their identification [10].

This bacterium used to be considered a virus [11]. However, its ability to synthesize its own protein and nucleic acid makes it a true bacterium [11]. Chlamydophila pneumonia is an obligate intracellular bacterium that is known to cause pneumonia, although 50% of people with evidence of infection show only mild or no symptoms [11]. It has also been known to cause bronchitis, sinusitis, and possibly atherosclerosis [11].

Pseudomonas aeruginosa rarely causes disease in healthy individuals but it is a major threat to immunocompromised hospital patients [12]. It has many factors that may contribute to its virulence (some are shown on the right) [12]. When found in the lungs, it is known to cause chronic infections in cystic fibrosis patients, or acute pneumonia [12].

After analyzing the lungs of several diseased patients Okudaira et al. concluded that the lungs could not be considered aseptic [9]. They found several fungus colonies within the lungs of patients that did not show any pathological changes [9]. There was also no evidence of fungal growth post mortem [9]. Aspergillus and Penicillum were the most common fungal group isolated [9]. The most common yeast found in the experiment was Candida [9]. 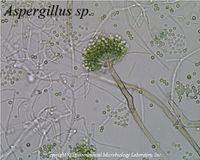 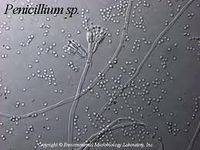 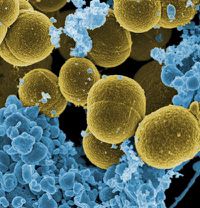 Most pathogenic bacteria in the lungs employ some mechanism in order to avoid the local innate immune system [7]. Most bacteria that cause lung infections produce a capsule that helps them avoid phagocytosis by alveolar macrophages [7]. Examples of bacteria that use a capsule are Streptococcus pneumoniae, Klebsiella pneumoniae, [7] and Staphylococcus aureus [13].

A gram-positive bacteria that is known to cause of pneumonia, meningitis and sometimes occult bacteremia [14]. It is part of the normal flora in the upper respiratory tract, but becomes pathogenic when found in the lower respiratory tract [14]. Its main virulence factor is believed to be its capsule [14].

A gram-negative bacteria that uses its capsule to evade the immune system [13] and cause severe pneumonia [15]. It is responsible for only a small amount of pneumonia cases, however the extensive damage it does to the host results in a high mortality rate [15].

A gram-positive bacteria that is known to cause pneumonia when found in the lungs [16]. It is known to avoid the immune system through different mechanisms; capsule, protein A, and leukocidin [16]. Protein A is a surface protein that binds to IgG [16]. This disrupts opsonization and phagocytosis [16]. Leukocidin is a toxin that damages leukocytes responsible for phagocytosis [16].

The alveolar membrane of the lungs is one of the largest surfaces exposed to the environment [2]. Innate immunity of the lungs is therefore very important in protection against potentially pathogenic microbes. This includes alveolar macrophages and polymorphonuclear leukocytes (PMNLs) [13].

Alveolar macrophages are phagocytic leukocytes that ingest particulates that have escaped ciliary action [13]. If alveolar macrophages are unable to clear the infection an inflammatory response takes place with an influx of neutrophils [13]. The degree of phagocytic and PMNLs response is dependent on the organism and the size of the inoculum [13].

•Staphyloccoci: Cleared by alveolar macrophages [13]. PMNL response recruited only if infected with a large inoculum [13]

•Pneumococci and Hemophilus influenzae: Produce an influx of PMNLs regardless of inoculum size [13].

Through their findings, Jonsson et al. [13] suggest that Streptococcus pneumoniae and Hemophilus influenzae virulence is related to their bacterial capsule and the levels of appropriate antibodies in blood serum. On the other hand, Staphylococcus aureus’ virulence is attributed to its resistance to intracellular killing by the alveolar macrophage [13].

2. Martin T., and Frevert C. “Innate Immunity in the Lungs.” Proceedings of the American Thoracic Society, 2005.

9. Okudaira M., Kurata M. and Sakabe F. “Studies on the Fungal Flora in the Lung of Human Necropsy Cases. A Critical Survey in Connection with the Pathogenesis of Opportunistic Fungus Infections.” Mycopathologia, 1977