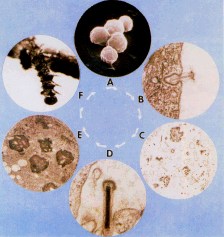 Lymantria dispar (gypsy moth) is a species that came from Europe and was accidently released into Massachusetts in the late 1860’s. Periodic, high-density outbreaks of gypsy moth have resulted in considerable defoliation of northeastern forests. Furthermore the gypsy moth habitat continues to expand to the south and west at a rate of about 12 miles per year. LdMNPV is a naturally occurring baculovirus that selectively infects gypsy moth larvae (1). In 1978 the EPA trademarked the virus under the name Gypchek and the U.S Forest Service distributes the virus aerially (2). Before 1986, Gypchek was distributed within “whole cadavers”. Since then, inoculated gypsy moth larvae are processed into powder containing a higher concentration of viral occlusion bodies that is more readily mixed with spray additives. Using this method of production requires 500-1000 infected larvae to prepare enough Gypchek to treat one acre of land. Researchers are currently developing an in vitro procedure of growing up and harvesting LdMNPV occlusion bodies from cells in culture, rather than in vivo development and isolation of occlusion bodies from whole larvae (1). 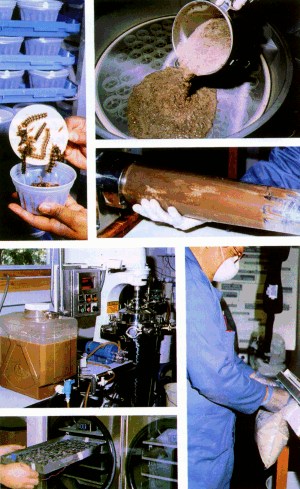 In vivo processing of Gypchek (2)

The LdMNPV genome is arranged into a single circular dsDNA chromosome totaling 161,046 bp with a G+C content of 57% (3). The LdMNPV is distinct from most other MNPV viruses due to its large size and high G+C content. Autographa californica MNPV is well-characterized and considered to be a prototypical MNPV. The genomeof AcMNPV (4) extends 133,894 bp and has a G+C content of 40.1%; both considerably less than that of LdMNPV. 163 ORFs composed of at least 150 bp have been identified for LdMNPV. Of the 155 predicted genes for AcMNPV, LdMNPV has 95 gene homologs (5).

Reproductive Cycle in a Host Cell

LdMNPV virions are found dispersed throughout the foliage that Lymantia dispar larvae feed upon and therefore enter the host through ingestion. The infection course is initiated once OBs reach the midgut of the host. The lepidopteran midgut is an alkaline environment that breaks down the polyhedra surrounding nucleocapsids. Following release from occlusion bodies, nucleocapsids enter surrounding midgut epithelium cells. However cells lining the midgut are regularly sloughed off, systemic infection must be initiated promptly. It has been purposed that MNPV nucleocapsids are capable of transmitting through midgut epithelium cells without replicating DNA and directly budding off to promote the spread of infection into hemolymph and tracheal tissues (7).

In AcMNPV, the GP64 envelope fusion protein is essential for the spread of infection. Within the genomes of Group 1 NPV viruses, including AcMNPV, both early and late promoter sequences have been identified within the regulatory regions upstream of gp64 coding region Washburn et al.(8) found that deletion of the early promoter sequence from the AcMNPV gp64 regulatory region produced a delay in infection time course when following virion ingestion, but not when infections were initiated by injection directly into hemolymph tissue. The genomes of group II NPVs do not include a gp64 ORF, but do have f genes that encode a protein with a function analogous to the GP64 fusion protein. Interestingly, early and late promoter consensus sequences were identified in the regulatory region F genes, suggesting a similar capability in LdMNPV(7).

The most characteristic feature of LdMNPV and other baculoviruses that infect Lepoditera is the manipulation of host behavior to maximize viral prodigy as well as increase the likeliness of spreading infection . The egt gene of LdMNPV and others encodes the EGT enzyme that inactivates 20-hydroxyecdysone, which is a hormone that initiates molting. Inhibition of molting extends the period of time lepidopteran larvae feeds upon tree vegetation. As a result there is more biomass to convert into OBs. Furthermore, this manipulation changes the climbing behavior of the gypsy moth larvae. Healthy larvae typically hide from birds in bark crevices or on the ground during the day and feed in the treetops at night. Catepillars infected with LdMNPV remain in the treetops until death. Therefore upon death of the insect host, OBs can be distributed in the foliage below, where other gypsy moth larvae are likely present (9).

Early in the course of baculovirus infection, a non-occulated form of the virus is exclusively produced. Later in infection, nucleocapsids are occulated within a protein matrix predominately composed of the protein polyhedron. This protein shell allows for the stability of released multinucleocapsids into the environment. Studies on AcMNPV, as well as other NPVs, has led to the characterization of a pattern of gene expression cascades with common chronology across all NPVs. Gene expression throughout baculovirus infection is organized into three phases: early, late and hyper-expressed. The early phase of gene expression, which occurs before DNA replication, is further organized into two stages; immediant early and delayed early gene expression. Genes expressed during the immediate early stage do not require the presence of trans-activators for sufficient expression levels. In contrast, genes expressed during the delayed-early phase, as well as later phases of gene expression rely on the presence of trans-activators and other genes expressed throughout the immediate early stage of gene expression (10). The immediate early expression of the g22 gene, which codes for a promoter of the RNA polymerase II gene, is required for subsequent DNA replication (11). The late stage of gene expression begins following the onset of DNA replication. The p39 capsid protein and polyhedral envelope protein are expressed throughout the late phase of gene expression (12). The hyperexpressed (also termed very late) stage of infection is characterized by expression of polyhedrin and p10 genes. Polyhedrin and P10 accumulate in the nuclei of infected cells throughout the hyperexpressed stage. Polyhedrin molecules interact to form occlusion bodies that package multiple nucleocapsids. At a later point in infection, p10 fibrils form on the surface of occlusion bodies and are thought to be a key component to the formation of the polyhedron envelope. Studies of NPV infection where the p10 gene has been deleted result in polyhedrons with uneven surfaces and from which virions are readily dislodged (7).