Difference between revisions of "Lyme disease"

Lyme disease is caused by the bacteria Borrelia burgdorferi sensu lato. Since the bacteria has a number of hybrid strains that also cause Lyme disease, Borrelia burgdorferi sensu lato is used to refer to all Lyme disease causing strains. Different strains may cause slightly varied symptoms in the host. B. garinii and B. afzelii are Lyme disease causing strains that inhabit Eurasia, while B. burgdorferi typically inhabits North America. This disease was first isolated in 1975 by Allen Steere in Old Lyme, Connecticut. Willy Burgdorfer isolated the bacteria from Ixodes ticks (deer ticks). The bacteria caused an immune response in the immune serum of diagnosed patients [1]. B. burgdorferi are microaerophilic, spirochaetes. A key to the pathogen’s virulence is that it does not require iron to survive. Instead, the bacteria has evolved to use magnesium. If detected early, antibiotics can be administered and the infection will cease. However, if left untreated, serious symptoms may arise, such as joint pain, sleep disturbance, and neurological problems. The disease is the most common in summer months and early fall. 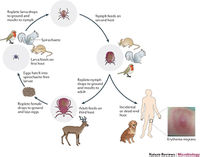 Lyme disease is a zoonosis that is primarily transmitted via ticks of the Ixodes genus such as the deer tick [2]. To initiate infection, the tick must bite the host and the saliva of the tick containing the spirochaetes will enter the host. Transmission typically occurs via nymph ticks, but may occur with ticks of any life stage. Nymph ticks are the most likely transmitter because they are small and not easily detectable by humans. Once attached to the host, the tick must remain there for 36-48 hours to transmit B. burgdorferi to the host. Infection usually occurs during spring and summer months in wooded areas where Ixodes nymph ticks are prominent. White footed mice are the natural reservoirs of this disease. A nymph tick is uninfected with the spirochaete until it feeds on an infected animal. Once infected the tick will more on to infect more hosts.

Unfortunately, the infectious dose for Lyme disease is unknown. The incubation period for B. burgdorferi is 3-32 days [3]. The first symptom shown after the incubation period is usually the bull's eye rash, but this is not always the case. Other, less recognizable, symptoms can occur such as fever and fatigue. The bacteria typically colonizes skin tissue first, but can move on to colonize the heart, peripheral and central nervous system and large joints. Colonization is directed by the detection of required nutrients such as glucose, amino acids, N-acetyl-glucosamine, and long chain fatty acids. After prolonged exposure, the spirochaetes usually begin to infect the extracellular matrix of the host which provides the bacteria extra protection from the host immune response.

Lyme disease is the most common vector-borne illness in the world [4]. Most outbreaks of this disease in the United States occur in the Northeast usually from Maine to Virginia. Outbreaks have occurred in other states such as Wisconsin, Minnesota, California, and Oregon. Nearly 30,000 cases were confirmed in 2008 in the United States with 60,000 cases occurring worldwide [3]. The most commonly effected age group is 5 to 9 years old. 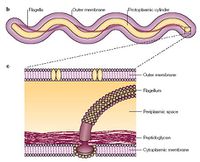 Once B. burgdorferi enters the host, the main goal is immune system avoidance through various virulence factors. The bacteria does not secret any toxins and its virulence comes from the exploitation of the immune system. The inflammation the immune system produces in response to this bacteria results in the disease. The tactics used by this spirochaete involve survival more than outright destruction of host cells.

One of the main virulence factors of this bacteria is its continuous variation of its surface antigens. The lipoprotein VlsE does this through recombination of silent cassettes [3]. This virulence factor significantly reduces the effectiveness of the adaptive immune system in responding to the invader.
B. burgdorferi also uses the tactic of binding to complement H factor through BbCRASPs [3]. These H factors are used by the host immune system to avoid activating complement for self cells. By exploiting this factor, the bacteria can avoid lysis by the alternative complement pathway. This reduces the effectiveness of the innate immune system in destruction of the pathogen.
The impediment of the generation of reactive oxygen species and chemotaxis of neutrophils can contribute to the bacteria's avoidance of phagocytosis. By avoiding this process of destruction, the bacteria can then spread to other parts of the body.

About 6% of this bacteria's genome is devoted to the important virulence factor motility [5]. This spirochaete uses a rotor mechanism to propel itself through blood, but the unique portion of its motility is the set of ribbons in its periplasmic space. Another important portion of its motility are the twin motors on either end of the flagella. The extremely fast motility of this organism allows it to escape phagocytosis of large cells such as the macrophage. Another virulence factor is the use of adhesins such as integrins, proteoglycans, laminin, and fibronectin.
The lipoprotein OspC is important to the bacteria in using plasminogen, which can digest fibrin and large glycoproteins [5]. Once the bacteria begins moving from the blood stream, the utilization of this enzyme becomes important in making a pathway to the extracellular matrix. While in the extracellular matrix, the bacteria can more easily hide from the immune system because there are less leukocytes in this tissue.
The bacteria have a two-component chemotaxis system called CheA-CheY. This system can signal to the flagellar motors when environmental signals are detected. These signals can either be favorable, such as nutrient detection, or non-favorable such as repellant molecules. Methylcellulose and hyaluronic acid which are found in the extraceullular matrix are known chemoattractants of this spirochaete.

The bacteria can also engage in quorum sensing and biofilm development. The biofilm can help protect the bacteria from the immune system as well as antibiotics. Quorum sensing involves microbes sensing cell density thresholds and releasing signals to other cells to alter gene expression [5]. Biofilms allow bacteria at the bottom to survive antibiotics because lower concentrations will reach them.

Symptoms of Lyme disease can develop in three stages. Stage 1 is the early localized stage which can occur 3-32 days after a tick bite [6]. The characteristic symptom of this stage is the bull's eye rash (erythema migrans) on the skin where the bite occurred. Only 70-80% of infected people get this rash and the rash can be delayed up to 32 days after the tick bite has occurred. These factors can lead to the disease being undiagnosed. Other symptoms of this stage typically include fatigue, chills, fever, headache, muscle and joint aches, and swollen lymph nodes.

Stage 2 is the early disseminated stage which can occur days to weeks after the tick bite. After time has passed the bacteria can spread to various sites in the body which produces different symptoms in the host. Some of these symptoms include additional bull's eye rashes, facial or bell's palsy, severe headaches, meningitis, pain and swelling in joints, radiculopathy, arthralgia, heart palpitations and dizziness. Meningitis could result from the bacteria spreading to the spinal cord and causing inflammation of the meninges. This is generally not fatal.

Lyme disease effects 60,000 people worldwide per year, but mortality of this disease is low. Secondary consequences of the disease such as cardiac and neurological problems are most often listed along with Lyme disease as the cause of death. Mortality rates in the United States include 114 people from 1999-2003 [7].

If the characteristic bull’s eye rash is detected, the diagnosis of Lyme disease may be made [4]. If no rash is present, other laboratory tests must be carried out to determine if the disease is present. Three to six weeks after the bite occurred, an enzyme immunoassay or immunofluorescent test may be done to test the level of Lyme IgM or IgG in the blood. If this is positive, a Western blot can be ordered to detect IgM or IgG antibody levels. Both of these positive test would indicate Lyme disease. If the disease is in the last stage and involving the central nervous system, clinical presentation is the only indicator of disease.

To avoid contracting Lyme disease, the central place to be cautious would be in wooded areas with high grass. Repelling ticks with DEET (N, N-diethyl-m-toluamide) is a good option if a wooded area is nearby or one has been entered recently. Always check children for ticks paying special attention to the hairline and hard to see places. Use a mirror to check yourself for ticks. Permethrin treated clothing is also available to repel ticks. Landscaping can also help to keep ticks out of yards and in public places. Pest management is another tool that can be utilized to prevent the spread of Lyme disease.

The host immune response is important in the virulence of B. burgdorferi because the bacteria exploit the immune system to persist in the host. This exploitation causes the symptoms seen in the host. When a tick imbeds in the host, spirochaetes will be released 36-48 hours later. Once a spirochaete enters, macrophages will be onsite to destroy the invader. The bacteria can avoid this by changing up its PAMPs which allow the macrophage to detect it. If a macrophage does detect the pathogen, it will send out cytokines, chemokines, and lipid mediators to activate inflammation. Inflammation is the cause of the characteristic bull's eye rash seen in the host. Neutrophils are generally the second leukocyte to arrive to the infection, but B. burgdorferi produces sialostatin L which effects neutrophil chemotaxis [3]. Without neutrophils, the immune system is racing to keep up with the infection. This is a significant factor in the immune system failing to contain the infection. SALP15 is a molecule produced by tick saliva and it aids in inhibiting killing of the spirochaete through antibodies. The molecule binds to the bacteria. Complement pathway is another agent used by the immune system to kill pathogens, but B. burgdorferi's BbCRASPs can bind to complement H factor which prevents the pathway from activating. With reduced effectiveness of macrophages, neutrophils, complement, and antibodies leads to the failure of the immune system and production of symptoms with this infection.