Difference between revisions of "Magnetospirillum magneticum"

A Microbial Biorealm page on the genus Magnetospirillum magneticum 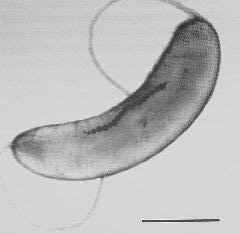 Salvatore Bellini of the University of Pavia first described magnetotactic bacteria in 1963 while analyzing samples of bog sediment. He identified a bacteria with unique motility and orientation in the aquatic environment which appeared to follow magnetic field lines. Richard Blakemore observed a similar phenomenon in 1975 at the Woods Hole Oceanographic Institution and subsequently wrote the first peer-reviewed report of magnetotactic bactera in Science.[12] The observations of these two early researchers later became the hallmarks of magnetotactic bacteria species such as Magnetospirillum magneticum.

M. magneticum is an aquatic, motile, Gram-negative bacteria that usually resides in chemically stratified water columns.[2,10] It contains magnetite filled magnetosomes, uses flagella for motility, and grows most efficiently between aerobic upper waters and anaerobic lower regions of most bodies of water. In the water, M. magneticum migrates along the geomagnetic field lines, swimming parallel or antiparallel to them in search of its optimum living environment.[2,4,8]

Although once considered only a novelty, M. magneticum has relevance to many scientific fields beyond its obvious applications to microbiology. It also contributes to the global iron cycle by actively converting iron to magnetite or gregite within magnetosomes.[4] M. magneticum has even been used to claim the existence of life on Mars due to the similarities between magnetite particle shapes found in M. magneticum and on the Martian meteorite ALH84001.[4,12] While many have challenged this claim, it illustrates the breadth of application of Magnetospirilum magneticum to modern life.

Magnetospirillum magneticum contains a wild type genome of approximately 4,967,148 bp with a single circular chromosome and a recently discovered cryptic plasmid pMGT.[6,9] The plasmid was discovered in the MGT-1 strain and had the purpose of developing an improved expression system in the AMB-1 strain(see current research).[6] Protein coding sequences comprise approximately 88% of the genome with a GC content of 65% and an average open reading frame of 961 bp. It also contains 33 insertion sequences, of interest because they contain lower than average GC content, suggesting horizontal gene transfer modifications. Nine of these regions are known to contain phage type proteins, while the others are still being studied.[9]

Although the picture above appears to show a long chain of magnetosomes floating in the cytoplasm, this is not the case. The MamAB operon encodes MamK, an active protein that is the most likely candidate for the actin-like filamentous cytoskeleton that anchors magnetosomes to the cell membrane.[1,8] As these magnetosomes contain magnetite which is derived from iron, there must be a way for the cell to take in iron. The magA gene accounts for this behavior, encoding a protein that constructs a H/Fe(II) antiporter on the cytoplasmic membrane. As an important side note, cells with the magA gene only take up iron in the presence of ATP, so it appears to be an energy dependent mechanism.[1,5]

Magnetospirillum magneticum is a Gram-negative, spiral shaped, aquatic, mesophillic bacterium. It prefers temperatures between 25-40 C and is microaerophillic, requiring a lower level of oxygen than what is provided at normal sea level on earth.[2,10] The main structures of interest in M. magneticum are the magnetosomes, magnetite containing vesicle invaginations of the inner cell membrane held in place with cytoskeletal filaments. Magnetosomes are surrounded by a lipid bilayer and usually contain 15-20 crystals of magnetite, each about 50 nm in length, but these figures can vary with environmental conditions. As mentioned in the genome section, the magnetosomes align themselves linearly and are anchored to the membrane by the protein MamK.[8] When working together, the combination of each tiny magnetic dipole enables the magnetosome chain to utilize magnetic cues, rotating the bacteria in its optimum direction. Physically, the magnetic field imparts a torque on the stationary magnetosome chain, allowing it to pivot and align the cell with magnetic field lines. The magnetosome points the bacteria in the direction of optimal growth environment, but flagella are necessary for the motility to travel there.[2]

M. magneticum primarily utilizes iron reduction to derive energy, but it can also undergo some respiratory nitrate reduction. M. magneticum is a facultative anaerobic bacterium, which means it has metabolic pathways for both aerobic and anaerobic processes; however, its growth tends to be inhibited at higher oxygen concentrations.[5] More specifically, when the bacterium encounters highly insoluble Fe(III) molecules in the aqueous environment, it releases high affinity ligands called siderophores to deliver the complexed iron to receptor proteins on the outer cell membrane. From there, a sequence of energy dependent carrier proteins bring the iron into the cell.[7] It is believed that these iron transporters are either directly or indirectly coupled to an ATPase pump.[13] High volumes of iron must be taken in by the bacterium in order to create the necessary proton motive force across the membrane. While iron uptake appears to require energy, it is believed that this investment allows for iron reduction from Fe(III) to Fe(II) and preservation of the proton gradient.[7,13] The gradient is utilized in energy production, allowing formation of magnetosomes and further stimulus for metabolism due to magnetotaxis (movement due to magnetosome orientation and flagella motion) into better growth environments with additional iron to reduce.

The ecology of Magnetospirillum magneticum has been largely unstudied and its specific evolutionary history is uncertain. M. magneticum are known to contribute to the global iron cycle by transforming iron to magnetite(Fe3O4) or greigite (Fe3S4) within magnetosomes.[1] Also, M. magneticum from marine environments have all been discovered in sediments that contain slightly sulfidic(S2-) components, suggesting that they flourish in low oxygen environments between aerobic and anaerobic water layers.[4] While these facts constrain the habitat of M. magneticum to poorly oxygenated water with abundant iron reserves, the extent of interaction it has with other organisms remains unknown.

Magnetospirillum magneticum has no known pathogenic activity and is well regarded by many scientists for its safety. Both the novelty of its alignment and migration along magnetic field lines, and its lack of pathogenicity have been met with enthusiasm among researchers.

Magnetospirillum magneticum has a number of applications to biotechnology, including its use in DNA/RNA isolation procedures and its possible use as a alternative power source. Particles from the M. magneticum have been used for immunoassay experiments with endocrine disruptors, mRNA, and DNA strands. There are two basic types of magnetic affinity: the direct method and the indirect method.[3] The direct method involves a high affinity ligand directly coupled to the magnetic particles. The indirect method is slightly more complicated as it utilizes a free affinity ligand which interacts with the target in suspension before the magnetic particle is able to recognize and bind to it.[3] Most notably in a physiologic sense, these methods have been developed to isolate hemoglobin from the blood.[3] This procedure relies on the fact that hemoglobin has four heme groups, each with an Fe(II) molecule within the porphyrin ring. The main drawback of these approaches is the cost, as many of the magnetic carriers and adsorbents developed are still rather expensive.[3]

While the use of M. magneticum to generate power may seem far fetched, Kartik Madiraju, a 16-year old high school student from Montreal was able to generate about half the voltage of an AA battery with 1/5 ounce of magnetotactic bacteria.[11] This process utilized Faraday’s law of electromagetic induction, essentially spinning the cells with two metal electrode strips above and below in order to induce a magnetic field and electric current. The electrical parameters generated by the model were not near functional capacity for real world applications, however, future testing may improve the electrical output.

The iron uptake systems of Magnetospirillum magneticum have been studied in detail using standard DNA microarray apparatus. These studies yielded five main types of expression(A, B, C, D, and E) for the genes feo, tpd, and ftr which all encode ferrous iron transporters.[5] Each type (A-D) was either upregulated or downregulated based on the iron concentration in the immediate environment except for type E, which was not responsive to the level of iron at all.[5] It was shown that magnetosome constructing cells upregulated ferrous iron transport and downregulated ferric iron transport in iron rich conditions. Low oxygen conditions were also shown to facilitate iron transfer. The simultaneous uptake of iron and its conversion to magnetite suggested that these systems package iron reserves to drive the synthesis of magnetosomes.[5]

Siderophores are low molecular weight transport molecules that target specific ligands with high afinity and bring them back to a cell. The first siderophore activity detected in magnetotactic bacteria was identified in Magnetospirillum magnetium by analysis of the supernatant from a late exponential phase culture .[7] This particular siderophore appeared to be targeting the highly insoluble Fe(III) to return it to the bacterium. It was shown to relieve growth inhibition of M. magneticum, as it increased the cellular uptake of iron. The structure of the iron binding siderophore was determined by NMR spectral analysis to be 3,4 dihydroxybenzoic acid.[7]

The first Magnetospirillum magneticum small cryptic plasmid, pMGT, was identified in the MGT-1 strain.[6] It is the first plasmid of its kind to surface in magnetotactic bacteria and is very stable under a range of physical conditions. pMGT has a nucleotide sequence of 3,741 bp with two potential open reading frames and a GC content of 62-65%.[6] The GC content is of note because it is slightly lower than that found in the main M. magneticum genome. The purpose of the plasmid is to improve gene expression in the M. magneticum AMB-1 strain. Due to the fact that pMGT exists in M. magneticum MGT-1 strains, it must utilize a shuttle vector, pUMG, to accomplish its purpose of improving the M. magneticum AMB-1 strain expression.[6]

3.Safarik and Safarikova, “Magnetic techniques for the isolation and purification of proteins and peptides,” BioMagnetic Research and Technology, November 2004, Volume 2:7.