Difference between revisions of "Marine eutrophication" 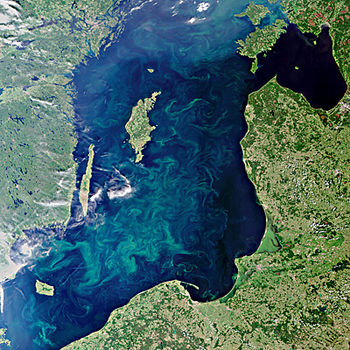 Fig. 1. A large cyanobacteria bloom in the Baltic in July 2010. Credit: ESA

The Baltic Sea is a brackish sea enclosed by land and connected to the Atlantic Ocean via a narrow strait that restricts water flow into the Baltic. Salinity ranges from about 30 ppt near the Danish Straits to less than 2 ppt in the northern Gulf of Bothnia [5]. A permanent halocline divides the sea into a low salinity layer on top and a high salinity layer on the bottom; this limits the vertical exchange of water and contributes to anoxia in the bottom layer [5].

Eutrophication of the Baltic 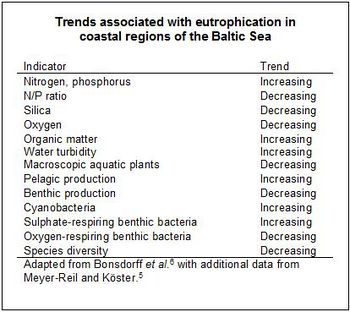 Since the 1960s, the Baltic as a whole has experienced eutrophication, but the changes have been more pronounced in the coastal areas and the Archipelago Sea [6], where signs of eutrophication include increased primary production and shifts in species abundance (see Fig. 1 and Table 1). In off-shore regions, both the expansion of anoxic zones and the increase in cyanobacteria blooms have been attributed to eutrophication [7].

The eutrophication of the Baltic has been driven by increased nutrient loading. Between 1950 and 1980, there was an as estimated four-fold increase in external nitrogen loading and an eight-fold increase in phosphorus loading into the Baltic [8]. Since the late 1980s, conservation efforts have resulted in roughly 35% reduction in external nitrogen and phosphorus loading; this has decreased dissolved inorganic nitrogen (DIN) levels, but has not significantly affected dissolved inorganic phosphate (DIP) levels, since inorganic phosphate is replenished through internal cycling [8] [7].

The most important planktonic, bloom-forming cyanobacteria species in the Baltic are Synechococcus spp. [9], Nodularia spumigena, and Aphanizomenan flos-aquae; Microcystis and Anabaena spp., especially A. lemmermannii, can be found in low-salinity coastal areas [8]. Both N. spumigena and A. flos-aquae are nitrogen-fixing, heterocystous, filamentous cyanobacteria; they possess gas vacuoles which enable them to move vertically in the water column to access nutrients and light, and give them buoyancy leading to the formation of floating scum on water surface during blooms [8]. The two species have slightly different temperature and salinity optima [4] but can co-dominate the same ecological niche in the open sea [8]. N. spumigena is the main toxin-producing species in the Baltic [4], producing the hepatotoxin nodularin which makes up 90% of cyanobacterial hepatotoxins in the Baltic [8]; Anabaena spp. have recently been shown to produce another hepatotoxin, microcystin [4]. Other toxins produced by cyanobacteria include ß-N-methylamino-L-alanine (BMAA) and the endotoxin LPS (see Table 2) [8].

Studies of cyanobacterial pigments in the sediments suggest that cyanobacteria blooms may have occurred in the Baltic as early as 8000 years ago; however, there is a marked increase in cyanobacterial pigments in the sediments since the early 1960s indicating more frequent or more intense blooms [10]. Available observational data also suggest increased blooms since the 1960s [8]. Off-shore blooms occur mainly in the Baltic proper, the Gulf of Finland, and the Gulf of Riga; the extent and timing of the blooms varies from year to year [7]. The largest blooms reported have covered more than 100,000 square kilometers or 25% of the surface area of the Baltic [4].

The growth of cyanobacteria begins in June, after an earlier spring phytoplankton bloom has exhausted much of the available DIN [7]. The low nitrogen-to-phosphorus ratio resulting from the spring bloom favours nitrogen-fixing species whose growth is primarily limited by phosphorus. Blooms typically occur in July and August; in addition to nitrogen and phosphorus availability, their occurrence is related to factors such as surface layer salinity, temperature, and solar irradiation [7]. Climate and nutrient conditions also influence which species is most likely to form blooms: for example, temperatures between 20 to 25 °C and low DIP favour N. spumigena, whereas Aphazimenon spp. prefer temperatures between 16 and 22 °C and high DIP [4]. The termination of blooms is caused by nutrient limitation, weather conditions, and possibly viral lysis [7].

Even though phosphorus is the primary limiting nutrient for nitrogen-fixing cyanobacteria, external nitrogen loading contributes to cyanobacteria blooms indirectly by boosting internal phosphorus loading [7]. Increased DIN promotes the growth of nitrogen-limited phytoplankton during the spring bloom, leading to increased sedimentation of organic matter, increased oxygen consumption by benthic bacteria which decompose the organic matter, and increased hypoxia. Hypoxia promotes the flux of inorganic phosphorus from the sediments and also increases the loss of nitrogen through denitrification [7]. The result is a low nitrogen-to-phosphorus ratio in late summer favouring the growth of cyanobacteria [7].

Nitrogen fixation by cyanobacteria makes a large contribution to nitrogen loading in the Baltic. According to one estimate, it is responsible for 20-40% of total nitrogen loading; this is sufficient to meet 30-90% of the nitrogen demand of pelagic primary production during the summer months [11]. Thus, nitrogen fixation by cyanobacteria contributes to the growth of nitrogen-limited phytoplankton, sedimentation of organic matter, and anoxia, in a ‘vicious cycle’ of eutrophication [7].

Cyanobacteria blooms are a public health concern because of the toxic compounds produced by many cyanobacteria species (see Table 2). Cyanobacterial toxins can cause skin irritation and gastrointestinal problems for swimmers; more severe symptoms are also possible [12]. The toxins also impact other organisms in the Baltic ecosystem; they have a harmful effect on vertebrates, including fish, while invertebrates appear to be resistant [8]. Cyanobacteria are grazed by zooplankton, and cyanobacterial toxins have been found in mussels, fish, and seabirds [8]. Since the lysis of dying cyanobacteria causes the toxins to be released into the water, the toxins may be acquired directly from the water as well as through the food web. The toxins do not accumulate; less than 1% of the toxins ingested are transferred to the next trophic level. In the sea, the toxins are dispersed through dilution, photolysis, and degradation by benthic bacteria, such as Sphingomonas spp. and Paucibacter toxinivorans [8].

According to Vahtera et al., remediation of eutrophication in the Baltic is inhibited by interconnected nitrogen, phosphorus and oxygen cycles, which result in internal phosphorus loading [7]. Thus, reductions in external phosphorus loading alone will not lead to oligotrophication in the short term; long-term reductions in both nitrogen and phosphorus loads are required. Duarte et al. warn that due to the impact of multiple stresses such as over-fishing and climate change return to a baseline state may not be possible even when external nutrient loads are reduced [13]. For example, higher temperatures caused by climate change may favour the growth of cyanobacteria in general and promote bloom formation by the toxic Nodularia over the less toxic Aphanizomenon in the Baltic Sea [4].