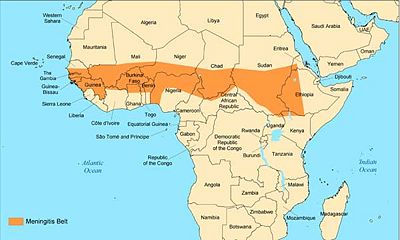 Meningitis is a bacterial or viral infection that causes inflammation of the spinal cord and brain. It originates in the upper respiratory tract and migrates to the meninges via the bloodstream (16). It is one of the deadliest diseases that has been plaguing West Africa for decades. The region that is affected the most is known as the Meningitis Belt; the countries that encompass the belt are Benin, Burkina Faso, Cameroon, the Central African Republic, Chad, Côte d'Ivoire, the Democratic Republic of the Congo, Ethiopia, Ghana, Mali, Niger, Nigeria and Togo. Each year, about 200,000 people, mainly children, are affected by this epidemic. Although there are several strains of meningitis, the one that is most prevalent is Meningococcal Meningitis (16).

Meningococcal Meningitis, most commonly found in West Africa, is caused by the microbe Neisseria meningitidis. It is highly contagious and is transmitted via personal contact with an infected individual. Bacterial meningitis can be treated with antibiotics (16). However, due to the socioeconomic status of West Africa, the outlook on receiving treatment is grim. 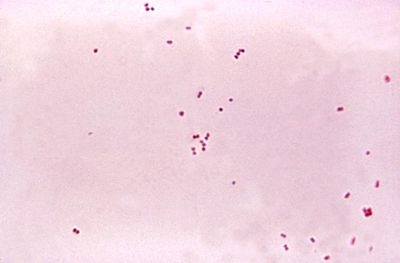 A micrograph of Neisseria meningitidis, a gram negative, microbe (http://phil.cdc.gov/phil/details.asp?pid=6423)

Causative factors of bacterial meningitis include Streptococcus pneumoniae, a gram-positive coccus, Neisseria meningitidis, a gram-negative aerobic diplococcus, and Hemophilus influenzae, a gram-negative rod. Viral meningitis can be caused by a variety of enteroviruses that are present in mucus, saliva, and feces. Airborne bacteria gain access to the upper respiratory tract through the nose and the mouth, where they become trapped in droplets of mucus and saliva. The mucus traps the microorganisms and the cilia move them into the pharynx for swallowing or coughing up. The primary niche of these microbes is the human nasopharynx, the uppermost part of the pharynx. Once in the nasopharynx, the microbe must adhere in order to avoid ingestion in the intestine. If heavy concentrations of bacteria are present they may penetrate the mucosa and populate and reproduce in the local tissue. Under appropriate conditions, the microbes will convert to highly pathogenic organisms.

The main virulence factor of these microorganisms is the polysaccharide, which makes it resistant to phagocytosis. The cell wall also is an important factor in mediating attachment in the human host. Bacterial surface proteins are considered virulence factors because of their direct role in the interactions between host and pathogen. Colonization, host tissue invasion, and immune system evasion are all resulting functions of the microbial surface proteins (5). The polysaccharide capsule of Neisseria meningitidis may interfere with such host-pathogen interactions. It is likely that the phase variation in capsule expression facilitates microbial adherence and invasion (4). Differences in the capsular polysaccharides are the distinguishing factors between the multiple serogroups of Meningococci. While uncommon in most developed countries, group A serotype is responsible for the recurring epidemic of sub-Saharan Africa (8).

The continuous flushing of the surface by saliva and mucosal secretions likely plays a role in reducing the opportunity for bacteria to adhere. The human immune system offers specific immunity via IgA and other immunoglobulin classes on mucosal surfaces but pathogenic meningococci produce IgA1 proteases, which cleave IgA1, generating fragments that block binding of complement-fixing antibodies (4). During growth in the blood, gram-negative meningococci shed LPS-containing segments of outer membrane that may act as decoys for the immune defenses. Like most pathogens, the microorganisms that cause bacterial meningitis have mastered many methods of immune evasion. Invasion from the bloodstream to the central nervous follows pilus-mediated adhesion to the endothelium. Once in the central nervous system, the pathogens proliferate and expel active cell wall or membrane-associated components like the lipoteichoic acid and peptidoglycan fragments of gram-positive microbes and the endotoxin of gram-negative bacteria (8). The microorganisms may continue to grow and infect the meninges of the brain, causing meningitis.

The common symptoms for meningococcal meningitits include a stiff neck, fever, headaches, delirium, and light sensitivity. If patients are not treated 48 hours after the onset of the symptoms, meningitis may even cause death. Approximately 20% of meningitis survivors have brain damage, hearing loss, and/or mental retardation (16).

In 1905, the first reported outbreak of meningococcal meningitis occurred in West Africa in what is now known as the Meningitis Belt. The first outbreak was made up of 32 cases in Zungeru, northern Nigeria; it then spanned west into northern Ghana and resulted in an estimated 20,000 reported cases (2). Epidemiologists believe that meningococcal meningitis was brought to northern Nigeria by pilgrims and/or soldiers who were infected in the Sudan. The month it would have taken soldiers and pilgrims to travel from Sudan to northern Nigeria by camel would likely have been within the time period that the microorganisms could remain alive in the nasopharanx of the travelers (9).

After the initial outbreak, subsequent large and deadly outbreaks tended to occur every 5-10 years, usually during the winter months of the meningitis belt. The most widespread outbreaks occurred in 1996 and in the first 11 weeks of 2009. In 1996, in what is now known as the largest recorded meningococcal meningitis outbreak in history, 250,000 cases were reported and more than 25,000 deaths occurred (16). During the first eleven weeks of 2009, more than 24,000 suspected cases were reported and there were an estimated 1,500 deaths in northern Nigeria and Niger. While the main outbreak occurred in the first eleven weeks of 2009, new cases are being reported every day.

The poverty and living conditions experienced by the majority of West Africa’s residents contribute to the severity and frequency of meningococcal meningitis [MNM] (15, 16). Effective vaccines for the most common strains of MNM are readily available (14). However, nearly all people living in the Meningitis Belt lack the financial resources required for routine preventative vaccinations. They must depend on outside organizations such as the WHO for essentially all treatment. As of 2003, the WHO policy towards MNM in West Africa was one of epidemic containment, rather than prevention (14). Once an individual sickens in West Africa, the prognosis is grim. Even with prompt, extensive treatment, MNM has a fatality rate of around 10% (14). A fatality rate of up to 30% has been reported in Africa (14). While limited access to even rudimentary healthcare is a huge obstacle, crowded living conditions and frequent social interactions contribute to the spread of MNM (15, 16).

Occurrences of MNM also have strong environmental predictors: epidemics are generally associated with a dry and dusty environment. One hypothesis explaining this relation between MNM occurrence and dust is that inhaled dust particles cause small cuts the mucous membranes of the oral cavity, allowing N. meningitidis microbes residing in the throat into the bloodstream and underlying tissues, causing infection (3, 15). Low humidity can also contribute to damaging the lining of the throat (3). An additional hypothesis suggests that MNM microbes can actually be carried in dust clouds, providing another means of infection3. Since N. meningitidis cells have been isolated in dust samples from Kuwait (15) this could be a valid mode of transmission. Both dust and dryness are markers of winter in the Meningitis belt; MNM occurs exclusively during this season (1, 3, 15). Winds from the Sahara and the Sahel blow through the meningitis belt during the winter, carrying large amounts of dust. The occurrence of the strongest winds is correlated with the time of epidemic onset (15). While epidemics generally cease with the onset of the wet season, they tend to occur in places that have a distinct wet season in addition to a dry season (i.e., epidemics are less likely in deserts and humid forests) (11). The contributions of these environmental factors to epidemics is supported by the occurrence of MNM epidemics in areas with similar climates, like Nepal (1).

Treatment of bacterial meningitis should be immediately addressed with the administration of antibiotics. Typically, a combination of broad-spectrum antibiotics such as penicillin, ampicillin, chloramphenicol, or ceftriaxone are utilized and delivered intravenously (16). Penicillin resistant strains of S. pneumonia and N. meningitidis have emerged that require alternative antimicrobial drugs such as vancomycin and rifampin (13).

Complications arising from the treatment or symptoms produced by bacterial meningitis need to be addressed by supplementary drugs in addition to the antibiotic treatment. Inflammation of the brain and spine caused by the action of antibiotics breaking up the bacteria into fragments is dealt with by the administration of corticosteroids such as dexamethasone. Increased cranial pressure caused by high levels of cerebrospinal fluid in the skull is decreased through mannitol injections. Other common complications and their treatments are seizures through anticonvulsants, fever through acetaminophen, and shock through additional fluids or drugs (6).

The limited medical resources in Africa make the typical 7-10 day regimen involved with most antibiotics unfeasible. An oil-based chloramphenicol has been determined to be the drug of choice for the treatment of bacterial meningitis in Africa due to its effectiveness with a single dose and its long-acting formulation (13).

Immunization against bacterial meningitis is accomplished through the use of vaccines. There are separate vaccines for the prevention of infection by the three most common pathogens (N. meningitidis, S. pneumonia, and H. influenza) (10).

In non-epidemic cases of bacterial meningitis, close contacts of those infected must be vaccinated and protected by chemoprophylaxis with antibiotics. This is done to cover the ten to fourteen day delay after injection where the vaccine does not provide adequate protection. Epidemic control is carried out through mass vaccination campaigns (15). The leading cause of bacterial meningitis in Africa is N. meningitidis serogroup A. Group A meningococcal polysaccharide vaccine provides immunization against this strain. Many challenges arise when providing immunization against bacterial meningitis. The availability of polysaccharide vaccines is restricted: they must be stored at -70°C, and their mobilization requires expensive cold chain equipment (14). Polysaccharide vaccines also only provide immunity that lasts between three to five years, and are unable to protect infants due to their inability to develop antibodies. The emergence of N. serotypes W-135 and C require different vaccines. Bivalent AC vaccine and tetravalent ACYW135 polysaccharide vaccine have been developed to protect against serotypes W-135 and C, but have limited availability due to high prices (16).

While there is currently a tetravalent vaccine for all meningitis serotypes, it is not affordable for mass distribution in underdeveloped countries like Africa (2). So, the current method used by the World Health Organization is to administer meningococcal polysaccharide vaccines to areas at risk. This method is insufficient, however, because vaccinating people once an outbreak is detected is purely reactive, and only controls the spread of the disease. This method is also flawed in that it relies on constant surveillance and early detection of the disease (7).

The WHO is currently testing a meningococcal A conjugate vaccine called MenAfriVac™, in an attempt to actively prevent future epidemics. While it only protects against serotype A, this is the most common and deadly form of the disease, so immunization against Meningitis A should have a huge impact on its prevalence in West Africa. The results from phase II clinical trials show that this conjugate vaccine is about 20 times more effective at generating an immunologic response than the currently used polysaccharide vaccine. The WHO predicts that widespread immunization with MenAfriVac™ will lead to herd immunity and ultimately prevent group A meningococcal epidemics (12).

Despite the positive outlook regarding the future of meningitis in Africa, there is still more that can be done to improve the current situation. More funding is necessary to make vaccinations affordable, as well as to improve the inadequate healthcare system. There also needs to be incentive to encourage pharmaceutical companies to mass produce the necessary vaccines as well as a less expensive and faster method to test for the different serotypes present in affected areas. These improvements are necessary to accelerate progress towards eliminating annual meningococcal epidemics in Africa.