A Microbial Biorealm page on the genus Merismopedia 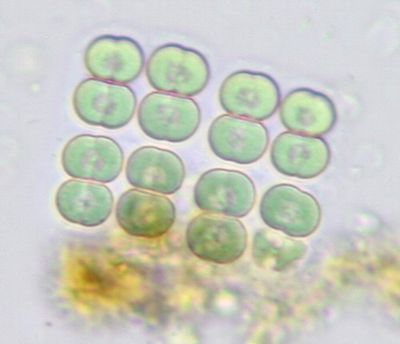 The cyanobacteria Merismopedia sp. are fairly common in several varieties of water habitats. Along with other cyanobacteria, they contribute to primary production through photosynthesis. They also can produce lipopolysaccharides which are known to create skin irritation and gastrointestinal distress (NOAA).

Currently no genome sequencing projects of Merimopedia strains are ongoing. However, several similar blue-green algae cyanobacteria have been sequenced or are currently in progress. Although there is still a lot of data that needs to be collected from an individual genome sequencing of a Merismopedia strain, basic knowledge can be gained by studying similar organisms that have already been sequenced. 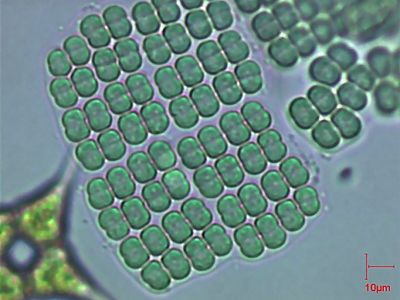 Merismopedia cells are gram-negative, blue-green in color. They grows as unicellular organisms in colonial form, reproducing in two fission planes to form plate-like colonies consisting of up to 4000 cells (Komárek). Reproducing specifically by fission, cell division occurs in two directions only (Manhattan).

Merismopedia colonies are commonly found in the sediments of freshwater sources. The strains of Merismopedia survive in freshwater by creating trophic and symbiotic relationships with other aquatic organisms such as zooplankton (Bukharin).