Difference between revisions of "Methanobacterium palustre"

A microscopic view of Methanobacterium palustre. 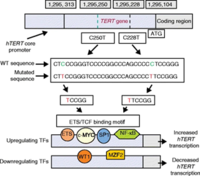 Methanobacterium palustre was discovered in 1989 in a location in Germany known as the Sippenauer Moor. The environmental habitat dominating in this area is known as a peat bog. Others often refer to it as a marshland. Due to its ability to anaerobically produce methane through a process known as methanogenesis, researchers thus named it's genus "Methanobacterium". Ironically the term used for the species identification, "palustre", is French for the word: marshland. Therefore the microorganism could be described as an Archaea that thrives in a marshland habitat via producing methane metabolically. (Zellner, G., et al.)

Methanobacterium palustre has a thin, rod-like shape and has been characterized as Strain F. This bacillus microorganism has an average cell length of anywhere between 2.5µm – 5µm. The cell body occasionally has filamentous appendages protruding outwards. These are used mostly as a means for cellular reproduction. In comparison, the appendages are over 10x the length of the actual cell body measuring to about 65µm. A Gram stain revealed that it is in fact Gram Positive meaning that it lacks a peptidoglycan layer outside of its cytoplasmic membrane. After viewing this microorganism using the wet mount technique, motility was not observed. Therefore, M. palustre must rely on water currents to move about its anoxic environment. (Zellner, G., et al.) 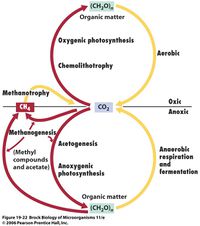 Methanobacterium palustre is a mesophilic organism, best suited for temperatures between 33 degrees and 37 degrees Celsius. The minimum and maximum growth temperatures are between 20 degrees and 45 degrees, respectively. Optimal pH for growth is approximately 7 and a pH value as low as 6 is known to be tolerable. The microbe is sensitive to salinity. Growth is impeded at 18 g/L NaCl and growth completely halts at 30 g/L NaCl. (Zellner, G., et al.)

When focusing on Methanobacterium palustre's metabolism, it is an autrophic microorganism that undergoes methanogenesis. In order to utilize this process, the conditions must be anoxic. This means that M. palustre is anaerobic and found at low depths within its peat bog environment. The microorganism's metabolism is dictated via 2 processes: the Carbon Cycle and Alcohol Dehydrogenase enzyme. When following the Carbon Cycle pathway, carbon dioxide oxidizes hydrogen gas to produce methane and water. In this case, hydrogen gas is the electron donor and carbon dioxide is the electron acceptor. The alternate pathway, as stated above, utilizes an alcohol dehydrogenase enzyme to convert carbon dioxide and 2-propanol. This reaction produces the products methane and acetone. In this case, the hydrogens bound in the 2-propanol molecule are the electron donors and carbon dioxide is the electron acceptor. (Zellner, G., et al.)

Methane is known to be a major greenhouse gas, over 25 times more potent than carbon dioxide. The methane becomes trapped within the Earth's atmosphere and causes increased global warming. Although the exact impact of M. palustre is unknown, wetland microbes alone emit 164 teragrams of CH4 per year ("Overview of Greehouse Gases...")

M. palustre also has potential for use in microbial fuel cells. Researchers at Stanford University and Penn State University have developed advanced cathodes that fuel the microbes' metabolism with the use of electricity. They achieved this by using a reverse battery with positive and negative electrodes. They then placed these probes into a beaker of nutrient enriched water. The resulting methane is captured then combusted as fuel. If the electricity used to power the reaction was obtained by emissions free sources, then the net carbon output is zero. The carbon released by the combustion of the methane originally came from atmospheric carbon dioxide. The conversion of electrical currents to methane is in fact very efficient with yield levels up to 80%. These efficiency levels plummeted greatly when the strains were isolated alone on media plates when compared to when they were probed as a whole biofilm community. This shows the high necessity of M. palustre to live in a microbial community. (Schwartz, M)