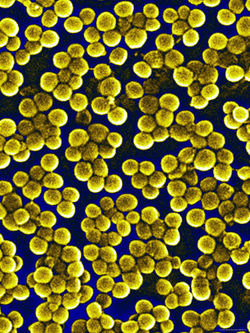 Bacteremia, also known as "blood poisoning" can occur when bacteria enter into the blood stream and begin to colonize. In some cases, bacteremia is self-limiting and asymptomatic but in other cases is known to lead to septic shock, which is fatal. Bacteremia may be characterized by one of more of the following symptoms: fever, chills, malaise, abdominal pain, nausea, vomiting, diarrhea, anxiety, shortness of breath, and confusion. (medical dictionary)

Endocarditis occurs when the endocardium of the heart muscle is damaged, allowing bacteria in the blood stream to become lodged onto the heart valves or lining and cause infection. Endocarditis is not characterized by a single symptom, but can be detected by many symptoms such as a mild fever, chills, weakness, cough, trouble breathing, headaches, aching joints, and loss of appetite. This disease usually affects people between the ages of 15-60. A risk that accompanies endocarditis is the formation of emboli. This occurs when bacteria break off from the site of colonization in clumps and become lodged in blood vessels. This can lead to organ failure as nutrients are blocked from accessing certain areas of the blood stream.