-The Phylum of Verrucomicrobia is derived "verruca" meaning "wart" and has been recognized only because of 16S rRNA sequencing. [7]

Methylacidiphilum fumariolicum is an thermoacidophilic autotrophic microbe first discovered in 2007 in volcanic pools near Naples, Italy by Huub Op den Camp and other scientists. This microbe not only endures but thrives in very hot temperatures (50-60 C) and mud that is extremely acidic (pH 2-5) by oxidizing methane. [1] M. fumariolicum can use ammonium, nitrate or atmospheric nitrogen as a nitrogen source and also fixes carbon dioxide using methane as an energy source. [5]

After studying the mudpot in which the microbe lived, it was found that M. fumariolicum is strictly dependent on the presence of rare earth metals such as lanthanides which act as cofactors to a key enzyme in methanotrophs, methanol dehydrogenase. [1] What is most interesting is that when these microbes are inhibited of growth, they store glycogen in large amounts (up to 36% of their dry weight), which indicates that carbon storage is important for survival when methane is absent. [5] 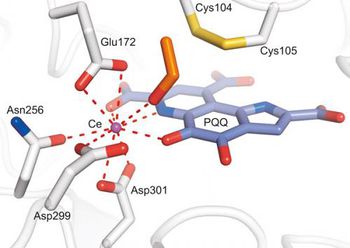 Methanol dehydrogenase of the bacterium M. fumariolicum uses rare earth metals/lanthanides, such as cerium, as a co-factor.[1]

M. fumariolicum exists in volcanic mudpots and thrives in the presence of many abiotic factors such as rare earth metals, carbon dioxide, and atmospheric Nitrogen. However, no information was found in regards to the microorganism and biotic interactions. This could be due to the fact that this microorganism lives in such a hostile environment that is harmful to most organisms, therefore, this organism most likely lives without any symbiotic relationships.