A Microbial Biorealm page on the Methylobacterium 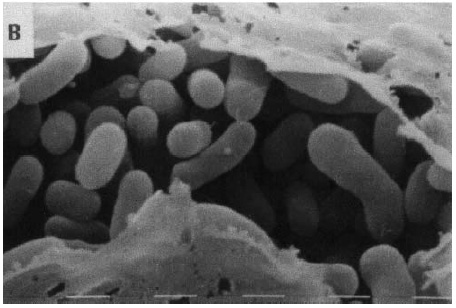 Methylobacterium are extremely important because they can use methanol and methylamine as well as C2, C3 and C4 compounds to grow. These bacteria, which generally have a distinctive pink pigmentation, utilize methanol that's emitted by the stomata of plants and have been shown to stimulate seed germination and plant development, perhaps by producing phytohormones. Some Methylobacterium strains are suggested to be part of the natural human foot flora and others have even been suggested to add to the flavor of strawberries. This bacterium can be found mostly in soils, on leaves, and in other parts of plants and, even though its mechanisms aren't fully understood, is highly studied, important organism (Lidstrom and Christoserdova 2002).

Methylobacterium extorquens has been partially sequenced and contains open reading frames with significant similarity to genes involved in plant association in rhizobia and Agrobacterium (Lidstrom and Chistoserdova 2002). 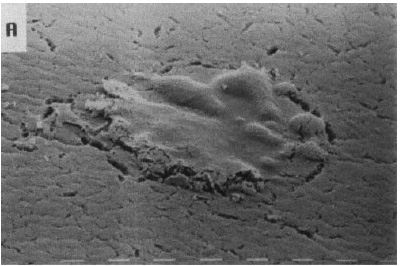 Electron micrograph of a colony of Methylobacterium strain FM4 on a methylamine agar medium showing a film covering the colony. From Anesti et al.

Methylobacterium is a facultative methylotroph, (meaning it has the ability to grow by reducing carbon compounds with one or more carbon atoms but no carbon-carbon bonds (Chistoserdova et al.2003)), that grows on methylamine, methanol, and C2, C3, and C4 compounds, including the methanol emitted by the stomata of plants. They are non-motile rod-shaped and are obligately aerobic; they are also called PPFMs - pink-pigmented facultative methylotrophs - due to most Methylobacterium strains' pink pigmentation. Methanotrophs, or methane-oxidizing bacteria, oxidize CH with O and use the carbon for energy. Methane is the end product of anaerobic degradation of organic matter; therefore, methane-oxidizing bacteria can be found using this methane in such habitats as in wetland rice fields (Eller and Frenzel 2001).

Although strains of the bacteria have been shown to stimulate seed germination and plant development, any communication or more intimate relationships that the bacteria might have with plants are not known. It is possible that it stimulates development through the production of phytohormones - one strain has been found to produce cytokinin zeatin and others are known to produce indole acetic acid. One strain has also been shown to form a root-nodulating nitrogen-fixing symbiosis with a legume like the rhizobia. On human feet, certain bacteria such as Brevibacterium linens produce a variety of methylated sulphur compounds due to the breakdown of amino acids, such as methanethiol from methionine, and other compounds common in dead skin cells. Methanethiol and dimethylsulphide, important intermediates in the biogeochemical sulphur cycle, might also be substrates for the growth of methylotrophic bacteria like Methylobacterium podarium (Anesti 2004). 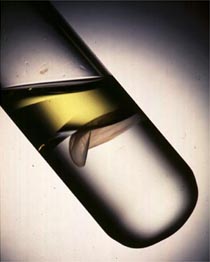 Methylobacterium forming a cohesive mat at a fuel/water interface. From Graham White.

Methylobacterium are common in soil and on surfaces of leaves and other plant parts. Methylobacterium strains have been localized as endosymbionts within cells in the buds of Scotch pine (Pinus sylvestris). One species, Methylobacterium podarium, is thought to be part of the natural human foot microflora. Methylobacterium have even been found living inside the human mouth. Samples have been isolated from the tounge, supra- and subgingival plaques that have shown growth of Methylobacterium, especially M. thiocyanatum. Methylobacterium forms a strong cohesive mat at fuel/water interfaces, such as those that might occur in storage tanks for middle distillate fuel-oils for heating or diesel engines. These chemofilms promote biofilm formation, which present potential problems for filters and injectors that may lead to engine failure. This chemofilm is generally relatively rich in nitrogen - when the polar compounds were removed from the component, the chemofilm formation was also eliminated. The precursors of this film are a small percentage of the oil phase, a wide range of polar compounds like fatty acids, and N-heterocycles (White). 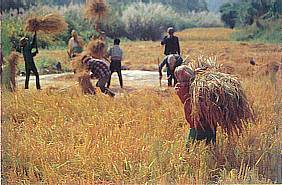 Wetland rice being harvested. From Window to Chiang Mai, Thailand.

Wetland rice contribute up to 20% of the global CH4 emissions. Due the growing human population, it has been estimated that the cultivation of this rice will rise by 60% in the next 30 years. Therefore, CH4 emissions will need to be reduced by microbial CH4 oxidation (as happens with Methylobacterium) or the ecosystem might become unbalanced. The other type of Methanotroph is the Methylococcaceae family - physiological differences between the Methylobacteriaceae and the Methylococcaceae families have to do with different ecological preferences. More research is being done of methanotrophs in order to understand their complex systems and ecological preferences in order to utilize them in facilitating attempts to reduce CH4 emission in the future. (Eller and Frenzel 2001)

Eller, Gundula and Peter Frenzel. 2001. "Changes in activity and community structure of methane-oxidizing bacteria over the growth period of rice." Applied and Environmental Microbiology, vol. 67, no. 6. American Society for Microbiology. (2395-2403)

Lidstrom, Mary E. and Ludmila Chistoserdova. 2002. "Plants in the pink: Cytokinin production by Methylobacterium." Journal of Bacteriology, vol. 184, no. 7. American Society for Microbiology. (1818)