A Microbial Biorealm page on the genus Methylococcus capsulatus 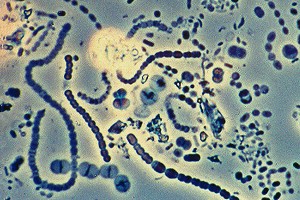 The M. capsulatus genome contains 51 known insertion sequence elements from various families, such as 20 elements from the IS4 family. The majority of such elements are discovered with higher intragenome similarity. This suggests the expansion of these elements, since their introduction into the M. capsulaus genome, repeated cycles of duplication and subsequent deletion, or gene conversion. Twenty elements belonging to the IS4 family of insertion sequences encode a 366-amino-acid transposase with 100% amino acid sequence conservation between copies. One copy (MCA 1197) is found within the soluble methane monooxygenase operon, and this suggests that this element is highly mobile. Other examples of insertion also included disrupted genes encoding tRNA pseudouridine synthase and an exopolysaccharide export protein.(1,5)

Methanotrophs have attracted considerable interest over the past 20 years because of their potential in producing bulk chemicals and single-cell protein and for use in biotransformation. Methanotrophs are unique in that they only grow on methane, although some will also grow on methanol.(2) "Methanotrophs are also able to metabolize or co-metabolize xenobiotic compounds, including chlorinated solvents such as trichloroethylene, and hence have potential as bioremediation tools." (2)

There are various metabolic pathways in Methylococcus capsulatus, including the methane oxidation pathway, mechanisms for carbon fixation, and nitrogen fixation, which will be discussed later in this section.

Methane oxidation pathway: Methanotrophs are unique in their possession of methane monooxygenases (MMOs), which catalyze the first step of methane oxidation. M. capsulatus is known to generate both a particulate membrane-bound form, pMMO, and a soluble form, sMMO, and these two enzymes have been well studied because their ability to perform methane oxidation.(6,7)

Carbon cycle: Carbon cycle is a process of turning the atmospheric carbon dioxide produced from combustion and respiration of all aerobes into anaerobic sediments via photo-and chemoautotrophy. Later, methanogens will generate methane from such organism. With the presence of heat and pressure, petroleum, coal, and peat can also be produced.(11)

Nitrogen fixation: "M. capsulatus is able to fix atmospheric nitrogen, conferring an advantage in environments where fixed nitrogen is limiting, and the structural genes for nitrogenase,nifH, nifD, and nifK, were previously shown to be contiguous, as they are in other nitrogen fixers."(7) This region include the genes nifE, nifN, and nifX, which are involved in synthesis of the nitrogenase iron-molybdenum cofactor; this organization has been found in Chlorobium tepidum and some nitrogen-fixing methanogenic Archaea. Two 2Fe-2S ferredoxins and genes identified as conserved hypotheticals are interspersed with the nif genes in the same orientation. The conserved hypothetical genes share the highest sequence similarity with genes from other organisms capable of nitrogen fixation, suggesting that they also have a role in this process.(7)

The genome sequence of Methylococcus capsulatus was found useful to study “methane-fixing symboints,” because the majority of such organisms are usually discovered inside of live-animals and cannot be grown on pure culture.(2) Inherited the characteristic of Methanotrophs, M. capsulatus contributes to the earth's ecosystem greatly by consuming methane, a product derived from chemical process of landfills and in the guts of ruminant livestock and also by many oil and gas processing plants.In recent years, environmental scientists have shown increasing interest in methanotrophs because their use of methane as a sole source of carbon and energy could possibly be harnessed to play an important role in efforts to reduce methane emissions that are generated by biological sources.(7)

Methylococcus capsulatus is not known to cause any diseases.

Methanotrophs produce an enzyme called methane monooxygenase (pMMO) that is not highly specific and can degrade TCE (trichloroethylene) and other compounds in addition to methane. Such enzyme are usually present in a small amount, to obtain an appropriate amount of this organism, the energy source, methane was pumped into the contaminated soils. As a necessity to perform hydrocarbon oxidation, oxygen was also pumped into soil for pMMO generation. One advantage for such mechanism is that, its reversible, hence, along with the absence of methane, methanotroph will return to its natural level. (3)

Methylococcus capculatus is perhaps the best studied and most useful methanotroph in the present microbiology world. pMMO is a membrane bound enzyme that can be purified from Methylococcus capculatus. This enzyme, as mentioned earlier, catalyzes the chemical process of oxidizing methane to methanol in methanotrophs, however, more surprising facts was found that enzyme pMMO is a dimer with both mononuclear copper and a copper-containing cluster. The purified enzyme, pMMO has a molecular mass of nearly 200 kDa along with an α2β2γ2 polypeptide arrangement. Each 200kDa were discovered to have approximately 4.8 copper ions and 1.5 iron ions. This experiment could only be done with great amount of pMMO enzyme, therefore, tremendous quantity of methane was conserved on agar plates to cultivate such enzyme. (3) From the use of Electron paramagnetic resonance spectroscopic parameters corresponding to 40 to 60% of the total copper are consisted of a mononuclear type 2 copper site. X-ray absorption indicate that purified pMMO is a mixture of Cu(I) and Cu(II) oxidation states. Finally, this experiment leads to a result showing the x-ray absorption fine structure data are best fit with oxygen or nitrogen ligands with a 2.57A copper to copper interaction, proving for a copper-containing cluster in enzyme pMMO.(3)

The Research of "Quantitative Proteomic Analysis of Metabolic Regulation by Copper Ions in Methylococcus capsulatus" conducted by Department of Chemistry, National Taiwan University. This research focuses on copper ions that switch the oxidation of methane by soluble methane monooxygenase to particulate methane monooxygenase in Methylococcus capsulatus (Bath). This research leads toward the understanding of changes in cellular metabolism related to the transcriptional and metabolic switch. (13)

The research of "Methylococcus capsulatus (Bath) is a dimer with both mononuclear copper and a copper-containing cluster" conducted by Northwestern University. This research focuses on the existence of copper ions inside the enzyme pMMO, which is purified from the organism of M. capsulatus.(3)