Difference between revisions of "Micavibrio"

{Uncurated}} A Microbial Biorealm page on the genus Micavibrio 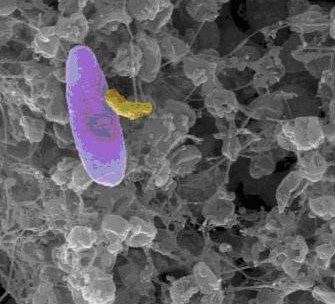 Scanning electron micrograph of Micavibrio aeruginosavorus (yellow) preying on Pseudomonas aeruginosa (purple) growing in a biofilm. From The University of Medicine and Dentistry of New Jersey

Micavibrio spp. is an obligate predator that exhibits ‘vampire-like’ behavior. It attaches to the surfaces of prey and feeds by "leaching", eventually killing its prey. They prey on Gram-negative micro-organisms known to be pathogenic in humans. 4 Due to its epibiotic lifestyle, obtaining an axenic culture is difficult, limiting potenial research. Currently, research is focused in its application as an antimicrobial.1 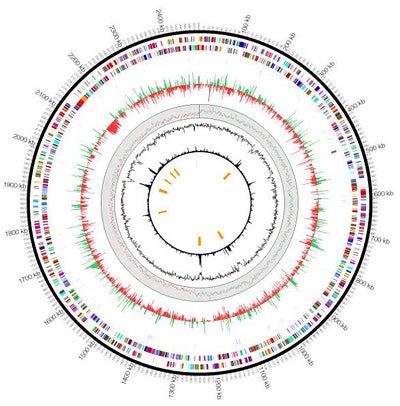 The genome of M. aeruginosavorus ARL-13 has been completely sequenced and is a single circular molecule consisting of 2,481,983 bp and a 54.7% G+C content.4 It is predicted that 90.3% of the genome codes for 1 rRNA operon, 40 tRNA genes and 2,434 open reading frames (ORFs). 4 There were no extragenomic DNA molecules (phage or plasmid) identified from the sequence and there was a complete absence of mobile genetic elements including insertion sequences, transposons and retrotransposons.4 Numerous genes are encoded which have an important role in predator-prey interaction, for example, hemolysin-related proteins.4 RNA-Seq analysis has shown a substantial difference in transcriptome between the attack phase (seeking prey) and attachment phase (feeding on prey and replicating). 4 M. aeruginosavorus ARL-13 encodes six hemolysin related proteins belonging to the RTX family of toxins which are suggested to contribute to recognizing and adhering to prey.4 The genome of M. aeruginosavorus ARL-13 is a moderate size at 2.4 Mbp and is almost twice the size of most obligatory intracellular alphaproteobacteria and is smaller, by comparison, to most free living alphaproteobacteria.4 The genome also encodes a large selection of hydrolytic enzymes with 4.3% of the genome predicting to encode 49 peptidases and proteases, 12 lipases, 4 RNAses, 2 DNAses and 37 additional hydrolases.4 The genome of M. admirandus ARL-14 has a G+C content of 57.1%.5

Micaviobrio spp. are curved rods measuring from 0.5 to 1.5 μm long and possess a single, unsheathed, polar flagellum.2 Replication is via binary fission and is dependent on prey.4 Because Micavibrio spp. are free living obligate parasites, they are maintained as plaques on double-layered, diluted nutrient broth agar. Optimal growth conditions are in an aerobic environment in temperatures ranging from 25 to 37ºC.[1]

Although M. aeruginosavorus depends on prey for replication, the genome encodes for most of the major metabolic pathways.4 Analysis of the genome suggests there are numerous amino acids that M. aeruginosavorus can neither make nor assimilate directly from the environment, which explains the prey dependency.4 Genome analysis also show many free-living bacterium features such as genes involved in lipopolysaccharide and cell wall biosynthesis, glycolysis, TCA cycle, electron transport chain, ATP synthase (indication of ATP generation) and respiration systems.4 It also contains a pentose phosphate pathway and a full set of genes for the metabolism of nucleotides.4 While M. aeruginosavorus encodes the genes for the synthesis of 13 amino acids necessary for protein synthesis, it is missing the biosynthesis pathways for the remaining 7 amino acids (Alanine, Arginine, Histidine, Isoleucine, Methionine, Tryptophan and Valine).4 The genome is also missing transporters for amino acids, peptides and amines, which M. aeruginosavorus obtains from its prey.4

To date, Micavibrio spp. have only been isolated from waste water. The life cycle of Micavibrio spp.' is characterized by an attack phase and an attachment phase.4 During the attack phase Micavibrio spp. are motile and actively seek prey.4 During the attachment phase Micavibrio spp. irreversibly attach to the cell surface of prey, feed, and divide via binary fission, eventually killing the prey.4 Oringinally, both species exhibited high specificity for prey, M. aeruginosavorus for Pseudomonas aeruginosa and M. admirandus for Stenotrophomonas maltophilia.5 However, more recently they both have been shown to prey on a broad range of Gram-negative bacteria when stored in suboptimal conditions.3