Difference between revisions of "Microbes in Stromatolites" 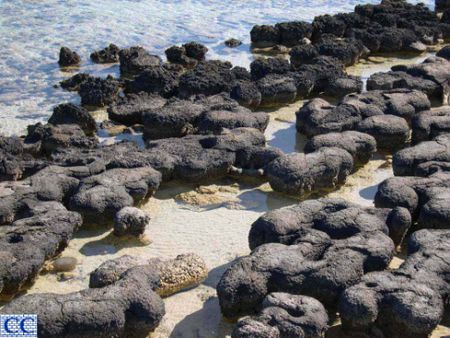 Stromatolites are internally-laminated, sedimentary growth structures, formed by the trapping, binding and precipitating activities resulting from microbial biofilms in shallow waters[1&4]. These layered formations that have left a permanent imprint of their presence on early Earth and continue to this day[4]. These living “rock like” structures range in morphology from flat films to domes and columns. Stromatolites have been traced back over 3.5 billion years to the early Archean period; giving them the title of the longest living and most resilient forms of life on this planet[14].

Stomatolites are comprised of a diverse system of physical, chemical and biological influenced components, which range in a scale from microscopic to macroscopic[8]. The microbial components that make up this system include: cyanobacteria, other photosynthetic bacteria, anaerobic heterotrophs (including fermenters), sulfate reducers and sulfur-oxidizers, all of which are tied together by a network of syntrophic relationships[6].

These unique microbes that build stromatolites have adapted well over time withstanding many major extinctions and thus, are presently found in ecosystems today. By studying the form and composition of stromatolites (living fossils), it has provided valuable knowledge about early environments and climates on Earth[2]. Stromatolites are one of the key factors in explaining the role of microbes in the evolution of the Earth’s biosphere[11].

Formations of stromatolites are developed by two separate microbial processes; non-lithifying (loose sediment used for microbial adherence, type 1 mat) and lithifying (loose sediment hardened into rock, type 3 mat)[7]. Based on morphology and culture-independent SSU rRNA sequencing, it is known that both types are dominated by Proteobacteria[7]. These primary microbial phyla include: Alphaproteobacteria, Deltaproteobacteria, Cyanobacteria and Bacteriodetes[7]. At the phyla and class level there have been indications of differences in species richness between the two mat types. The results reveal mat 3 stromatolites to have an increased rate of photosynthesis and sulfate reduction, which leads to a higher diversification and abundance of microorganisms[7].

Scientific evidence proposes that stromatolites provide a unique niche that allows all three domains of life to grow (bacteria, eukaryotic and archaea)[11]. More than half of the recovered sequence reads are assigned to bacteria classification, specifically the organisms derived from Cyanobacteria (Chroococcales, Oscillatoriales and Nostocales) and diazotrophic Cyanobacteria (Cyanothese and Synechococcus)[7]. The rest of the sequences are distributed between eukaryotic and archaea classifications. The low frequency of recovered reads assigned to the eukaryotic domain, display a high diversity of microorganisms involved in controlling bacterial composition and nutrient cycling within the mats. These eukaryotic microorganisms included: Alverolata, Amoebozam Cryptophyta and Euglenozoa[7]. The smallest recovered read count was assigned to archaea classification which includes the microorganisms: Crenarchaeota, Thaumarchaeota and Euryarchaeota[7]. Although many of these microorganisms may not be participating within stromatolite formation, they all share the common niche as a suitable place for growth. 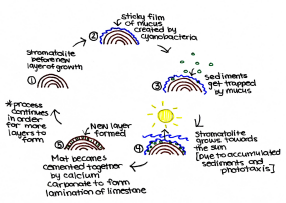 The most predominant microbial process during the formation and growth of stromatolite structures, involves the cyanobacteria, which relies on photosynthesis, carbon-fixation and mobility for growth[14]. To ensure the ideal growth of stromatolites, there needs to be optimal geochemical conditions, selective metabolism and principle community composition[5]. Tides, storms, wave action, water depth and sediment influxes have control over the shape of the stromatolites. Ultimately, this microbial process forms a dynamic balance between sedimentation and lithification of cyanobacteria[14].

Cyanobacteria has the ability to produce and secrete a sticky film of mucus (exopolymer and subsequent heterotrophic bacterial decomposition), which protects them from ultraviolet radiation[9]. The biofilm created by the communities of gliding cyanobacteria accumulates sediments by trapping them into ossified (rigid) layers of chalk, gypsum, dormant bacteria and other debris[13]. The sediments become bound together by mucus; the cyanobacteria are then able to grow atop of their layered deceased precursors[14]. This, along with the process of phototaxis, will cause the stromatolite growth to migrate in the direction of the sun. The vertical growth allows for more sediment to be bound, which eventually become cemented together by precipitated calcium carbonate, to form thin laminations of limestone[14]. This underlying process performed by endolithic cyanobacteria is defined as lithification[9]. During cementation, endolithic coccoid cyanobacteria develop within the structure. By modifying the trapped sediments, the coccoids are able to form thicker lithified laminae which stabilize the growing surfaces against mechanical damage[9]. The equilibrium between the sedimentation and lithification (precipitation and cementation) processes performed by the different microorganisms, allow for the banded stromatolites to grow a couple millimeters each year and to be preserved in the fossil formation presently found on Earth[14].

There are currently three well-known existing ecosystems containing living stromatolites: the hypersaline stromatolites of Shark Bay (Australia), the open ocean stromatolites of Highborne Cay (Bahamas), and the freshwater stromatolites of Ruidera Pool (Spain)[5]. These three environments all differ in salinity content, which has shown to be a major driving force in environment-specific evolution[5]. Although, these stromatolites have relatively conserved microbial processes, their ability to adapt to new environments has been historically caused by the exchange and rapid evolution of microbes via lateral gene transfer and virus interactions[14].

The most predominant abundance of modern day stromatolites are found in Hamelin Pool, Shark Bay[5]. This hypersaline environment causes hostile conditions to many organisms, allowing for minimal competition for growth factors[11]. Founded in 1954, these hypersaline stromatolites have established a significant impact on current research, as their shape and formation are analogous to the fossilized Precambrian stromatolites5. This provides unique insight into Earth’s history and is a present day recording of our continuous changing planet. 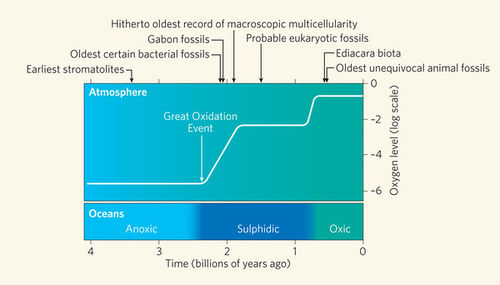 The photoautrophic nature of cyanobacteria, within stromatolites, releases abundant amounts of oxygen as a bi-product into the surrounding environment[12].These organisms were the first to use water as an electron source and hydrogen for fixing carbon dioxide in order to produce this oxygen. The oxygen would oxidize the reduced (soluble ferrous) iron in solution to form oxidized (insoluble ferric) iron[12]. Thus, the banded iron formations that we see today were created. Millions of years later the iron was oxidized and the oceans became saturated with oxygen, which eventually gassed out to accumulate in the atmosphere[12]. This powered the Cambrian explosion and began the evolution of phototrophic eukaryotes (plants, algae and protists) and aerobic forms of life[12].