Subglacial environments, including those beneath both ice sheets and outlet glaciers, host diverse microbial communities[1][2][3][4], despite complete darkness and sub-zero temperatures[2]. These communities, largely composed of bacteria and archaea[1][2][4], appear distinct between some subglacial environments5 and possibly stable at the OTU-level over decade-long timescales[1]. A diverse array of metabolisms appear present[2][5], including those reliant on reduced N, S, Fe, and methane for energy[5]4. Multiple previous studies have shown the importance of subglacial microbial communities in global biogeochemical cycling [3][5], making their continued characterization important as future warming alters the attributes and prevalence of these environments. 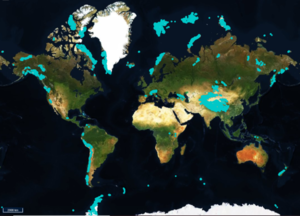 Fig. 1 Location of glaciers within the Randolph Glacier Inventory are shown by teal dots. Note: This map only includes glaciers and not ice sheets or caps. Modified from RGI Consortium[7]. 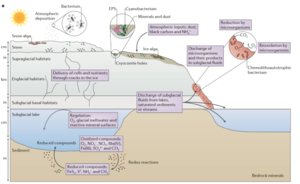 The defining characteristics of subglacial environments include the complete lack of light[8], largely anoxic conditionsCite error: Invalid <ref> tag; invalid names, e.g. too manyCite error: Invalid <ref> tag; invalid names, e.g. too many, and low temperatures (around 0⁰C )[3]. Despite these common characteristics, subglacial environments are diverse in their environmental attributes. This partly derives from the diversity of Earth’s cryosphere. As suggested by the name, subglacial environments are found beneath glaciers, both alpine and outlet, but also below Earth’s massive ice sheets – the Antarctic and Greenlandic. These differing environments, while seemingly similar, are quite distinct and require their own fields of study. Glaciers only need be tens of meters thick, while ice sheets are kilometers thick.

In addition to liquid water, the chemical components of subglacial minerals are required for microbial life. Due to the complete lack of light mentioned above, microbial communities rely on the presence of chemical energy within minerals at the ice-sediment interface. The flow of glaciers grinds these minerals, making them more available to the present microbial communitiesCite error: Invalid <ref> tag; invalid names, e.g. too many. As a result, the minerology below glaciers and ice sheets is an important control on nutrient availability and thus community composition[4].

Despite the extreme conditions of subglacial environments, current research indicates the presence of diverse microbial communities[2][3][8]. These communities can consist of bacteria, archaea, and eukarya[3]. The diversity within and between subglacial environments is largely driven by bedrock and sediment mineralogy[10][4], which drives chemolithoautotrophy within the system, the main source of primary productivity given the complete lack of sunlight[8].

This great microbial diversity of subglacial environments appears greater than other cryo-environments, such as supraglacial environments and snow[3][8]. Hamilton et al.[3] suggested this greater level of diversity is driven by limited nutrient availability, requiring metabolic specificity, and resulting in “minimal niche overlap.” This minimal overlap allows for the proliferation of a variety of metabolically specific microbes.

As noted above, mineralogical controls (specifically pyrite and iron compositions) help define microbial community composition[10]. Given this, key microbes in subglacial environments are those involved in the breakdown and reduction of iron and sulfur. The below list of key players is limited and non-exhaustive given the limited amount of available data from subglacial environments.

Relationship with Climate - Past and Future

Over the course of Earth’s history, glaciers and ice sheets have played a significant role in climate dynamics, notably through ice-albedo feedbacks (i.e., Perovich et al. 2007[13]), sea-level change (i.e., Chen et al. 2013[14]), and ocean circulation (i.e., Cope and Winguth 2007[15]), among many other impacts. Subglacial microbial communities have likely played a key role as well, by possibly helping sustain life during global glaciations[10]. These cold-adapted[12] communities are uniquely-adapted to survival during global glaciations. As such, subglacial microbial communities were possibly widespread during such cold events[10]. The same is not likely during expected future warming.

A portion of subglacial microbes produce methane (i.e., Stibal et al. 2012[18]), which can eventually be exported to the atmosphere via subglacial drainage, making the magnitude of this subglacial production and export climatically relevant[19]. For the 2015 melt-season alone at a single proglacial river, Lamarche-Gagnon et al. (2019)[19] estimated that ~6.3 tons of methane were transported from the inner portions of the Greenland Ice Sheet. As arctic regions continue to warm, the microbial production and subsequent export of methane may increase[19].