Biofilms are microbial consortia physically aggregated from a competitive advantage in forming a community function. A biofilm can be formed from a single species, but it is more commonly comprised of many, often distantly related, microorganisms that utilize specific metabolic pathways [1]. These consortia have become the object of study in the development of efficient microbial fuel cells. Microbial fuel cells (MFC) are a relatively new technology that harnesses the electrons released transferred during microbial respiration to generate an electrochemical potential difference between an anode and a cathode. Biofilms on the electron source (i.e. anode) have been demonstrated to increase the current due to the direct electron transfer between the microbes and the surface of the anode [2]. Only specific groups of microbes can be used to power a microbial fuel cell, due to their adaptation to donate electrons externally during respiration, and, so, researching the physiology of these organisms can improve the efficiency of the cell [1].

The formation of a biofilm is initiated by an attachment and growth of a cell on a surface [4]. Attachment is aided by expression of Exopolymers that adhere to a surface [4]. As the biofilm grows it spreads along a surface and grows in thickness. The growth along the surface is due to the dispersion of microbial cells that detach from the layer of biofilm and adheres to another part of the surface [4] [5]. 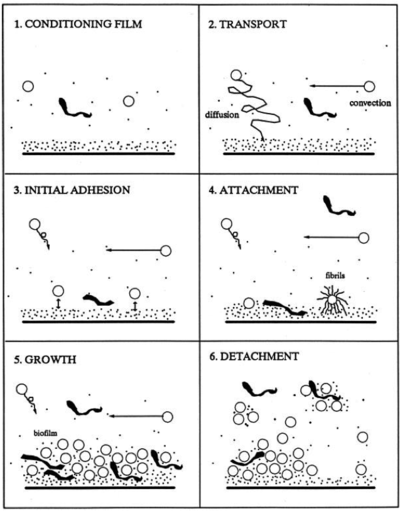 This spreading property is especially useful for MFC efficiency because it means that the number of electrons transferred to the anode is directly proportional to the anode's surface area given minimal loss of electrons due to close proximity between the biofilm and the anode [2]. Also, a thicker biofilm that does not decrease efficiency of the MFC is advantageous because it ensures that a dormant layer of bacteria is present to replace any dead or removed cells [6].

The evolutionary advantage of a biofilm found in nature is that multiple microbes, such as Archaea and Bacteria can form a community in which the products of one species are the substrates for another (a.k.a. Intermediary community metabolism) [7]. Consequently, the biofilms found in microbial fuel cells are composed of bacteria that allow free electrons to be transmitted to the anode and generate a current to the cathode. For example, members of the Geobacter family are used because their metabolic pathway extracellularly reduces iron and metal oxides as the terminal electron acceptor [3] [8]. A detailed study on the MFC biofilm composition by Kim et al. (2006) suggests that diverse species present on the anode allow for multiple candidates for MFC operation given different environmental conditions [1]. Hence, a mixed biofilm of Pelotomaculum thermopropionicum, Methanothermobacter thermautotrophicus, and Geobacteraceae could produce a greater potential difference than a film of just Geobacteraceae colonies [4] [8]. 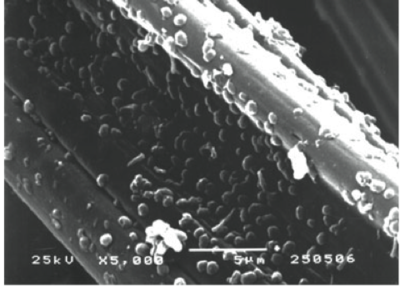 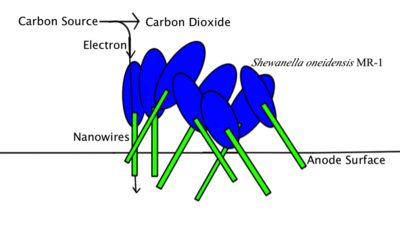 Some bacteria have been shown to produce extracellular nanowires to respire and adhere to surfaces [8]. Shewanella oneidensis MR-1 is an example of such an organism. S. oneidensis uses the nanowire to reduce extracellular iron (III) oxide to iron (II) oxide or the anode if the bacteria is adhered to an electrode of a microbial fuel cell [8]. Also, studies by Ringeisen et al. (2007) have demonstrated that by building a small anode chamber, it is possible to generate a current using S. oneidensis under aerobic and anaerobic conditions [11].

It is possible that further developments in MFCs will lead to the development of an independent power source. Currently, a short-term goal is to create a system where microbes are used for wastewater treatment and the current generated from the wastewater treatment can be used to recover some of the applied energy [9]. It is estimated that domestic wastewater contains 9.3 times the amount of energy currently used to treat wastewater through aeration-based processes in waste management plants [8]. By harnessing the potential energy of domestic wastewater, it is possible to create a self-managing waste purifying system [8].

Sediment microbial fuel cells can utilize pre-existing carbon sources, such as chitin, to generate energy [8]. By manipulating bacteria that use these carbon sources, we can set up MFCs on ocean and lake sediments to power underwater monitors where battery replacement or solar power may not be an option [8].

A modified microbial fuel cell can be used to perform electrohydrogenesis [10]. 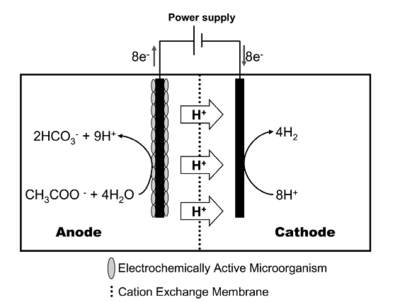 This is commonly referred to as biocatalyzed electrolysis and operates under strictly anaerobic environments [9] [10]. The generation of hydrogen has been shown to be a highly efficient process at 8-9 mol H2/mol glucose or 2.9 mol H2/mol acetate and presents an alternative to expensive chemical purification processes to obtain pure hydrogen [9]. The electrochemical operation of the modified MFC is identical to the original, except that an external power source must be present to reduce the protons to H2 at the cathode [9] [10]. The collected hydrogen gas can be compressed and made into hydrogen fuel cells.