Difference between revisions of "Microbial Infections in Salmon Farming" 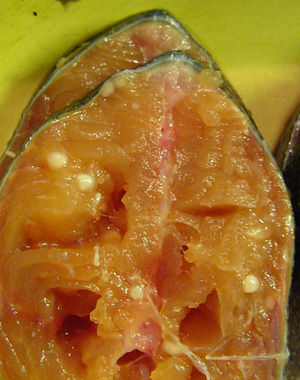 Salmon farming is a growing industry as natural fish stocks decline and a demand for the nutritional benefits of fish grows [1]. The major challenge to salmon farming is similar to other farm operations, namely microbial infections which reduce yield and can lead to human health problems. Such infections include everything from viruses to multi-cellular parasites.

Furunculosis, also called tail-rot, is a bacterial infection caused by Aeromonas salmonicida , a gram-negative, rod shaped facultative anaerobe whose virulence is attributed to an array of proteins, called the A-layer, that protects the bacterium [2]. This disease - found mostly in Atlantic salmon - is characterized by boils on the sides of the fish and is highly contagious through open sores, resulting in its spread through salmon farms [3].

Vibriosis, another bacterial infection, is caused by Vibrio species such as Vibrio anguillarum and Vibrio salmonicida which are gram-negative, curved rod-shaped facultative anaerobes with one and at least nine flagella respectively [4]. Infecting fish residing in shallow salt and brackish water, this disease is characterized by damage to and discolouration of the skin and fins [5].

Infectious Salmon Anaemia (ISA) is an infection caused by the Infectious Salmon Anaemia Virus (ISAV), an RNA virus of the family Orthomyxoviridae. Some infected fish will show signs of anaemia, such as pale gills, while others remain asymptomatic until death. The virus is transmitted horizontally as the it is shed in epidermal mucus, urine, feces and gonadal fluids, and taken up through the gills or orally [6]. 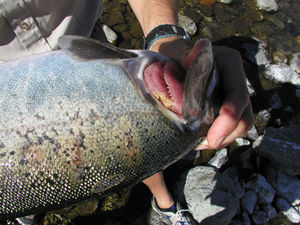 Columnaris is an infection caused by Flavobacterium columnare, a gram-negative, rod-shaped aerobe. Signs of columnaris include damaged fins, ulcers on the skin and discolouration of the gills as a result of acquiring other infections through the lesions [7]. 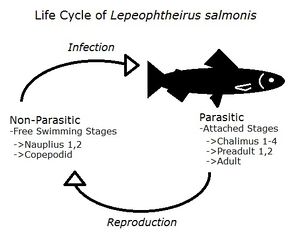 Henneguya zschokkei is a myxosporean parasite that infects various species of salmon, causing white spore containing cysts to form [8]. This infection, however, does not cause the fish any harm since the salmon continue to survive and breed [9]. Salmon may also be infected with sea lice, particularly Lepeophtheirus salmonis, which causes lesions at the site of attachment, making the fish more susceptible to other infections. Lepeophtheirus salmonis lives part of its life cycle as an obligate parasite but its free swimming stage also allows for direct transmission from fish to fish [10].

Generally, the pathogens of salmon do not affect humans that eat the infected fish. Aeromonas salmonicida is not pathogenic in humans since it fails to grow at 37°C [11]. Unlike certain Vibrio species, Vibrio anguillarum does not show any virulence in humans [12]. ISAV is not a pathogen in humans either since, after the consumption of infected salmon, this virus is inactivated by the low pH of the stomach [13]. Henneguya zschokkei has not been shown to be parasitic in humans when infected fish are consumed [9].

Microbial infections play a major role in the closure of salmon farms and the loss of employment in the industry. As mentioned above, these pathogens are not known to harm humans, however, infected salmon cannot be sold due to their infection in the first place [9]. Numerous farms in Chile have been affected by outbreaks of ISA since 2007 [14]. In June 2012, an outbreak of ISA also occurred in Newfoundland and Labrador, Canada, resulting in the loss of about 450,000 salmon [15]. Vibriosis has been an issue since the 1979 outbreak in Hitra along the western and northern Norwegian coastline. Furthermore, outbreaks have been reported in Scotland, on the Faroe Islands, and in New Brunswick and Nova Scotia, Canada [16]. Although Henneguya zschokkei does not kill or even harm the fish, infected salmon still cannot be distributed, resulting in a greater loss for salmon farms [9].

Since fish are generally grown in high population densities in salmon farms, infections spread readily. The aquatic environment itself allows the rapid spread of infections to salmon of other farms as well as wild salmon [3]. Reducing the number of fish is usually not a chosen option as this would harm the salmon farming industry. Antibiotics may be used to clear bacterial infections, however, they may not be effective as some infections, like furunculosis, cause the salmon to lose their appetite [16]. Resistance to antibiotics is also an issue, making their use appropriate only in the short term. Vaccinations using inactivated antigens from the pathogens have been found to be the most effective method for preventing infections including furunculosis and vibriosis [16].

[9] Boyce, Z. Kabata and L. Margolis. (1985) "Investigation of the Distribution, Detection, and Biology of Henneguya salminicola (Protozoa, Myxozoa), a Parasite of the Flesh of Pacific Salmon". Canadian Technical Report of Fisheries and Aquatic Sciences (1450): 55.

[14] Kibenge, F. S. B. et al. (2009) Infectious salmon anaemia virus (ISAV) isolated from the ISA disease outbreaks in Chile diverged from ISAV isolates from Norway around 1996 and was disseminated around 2005, based on surface glycoprotein gene sequences. Virology Journal 6:88