Difference between revisions of "Microbial Life in Lake Vostok" 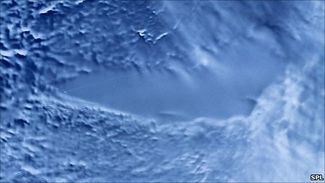 Lake Vostok is the largest subglacial lake in the world, located 4,000 m beneath the East Antarctic Ice Sheet [1]. It spans a total surface area of 14,000 km2 and contains 5,600 km3 of fresh water [1]. Pressure exerted by thick layers of glacial ice above the lake allows the water to remain in a liquid state despite the subzero temperatures [2]. The ecology within the lake is an interesting field of study due to the seemingly inhospitable conditions.

The ice that surrounds Lake Vostok has isolated the environment from the rest of the world for around 420,000 years [3]. The surrounding ice insulates the lake water, keeping the water temperature at a constant -2 °C [1]. The pressure is also maintained at a constant 400 atm [1]. The lake consists of a northern and southern basin. Only the southern basin has been extensively studied for microbial life [5]. The southern basin contains a deep region of open water as well as a shallow embayment area. Hydrothermal activity at the base of the lake near the embayment area creates an additional niche within Lake Vostok [5]. The lake water is continually cycled through melting and refreezing at the base of the ice sheet, with a turnover time of over 5,000 years [4]. This process causes a large amount of gases, such as oxygen and nitrogen to diffuse into the lake [4]. Furthermore, accretion ice (newly frozen ice) is formed at the base of the ice sheet [5]. Newly accreted ice comes in two forms: type I and type II. Type I ice is nutrient-rich, containing a large amount of minerals and dissolved ions important for microbial growth [5]. Conversely, type II lacks nutrients and is low in mineral and ion content [5]. The location at which the ice freezes determines the type of accretion ice [5]. For example, ice freezing near the shallow embayment area, usually develops into type I ice. Ice freezing in the open waters will likely result in type II ice.

In order to survive in Lake Vostok, microbes must be able to tolerate extreme low temperatures, high pressure, high oxygen concentration, and absence of light. The lack of organic carbon selects against a heterotrophic microbiota [5].

Microorganisms in the lake are expected to have very high metabolic efficiencies in order to sustain long-term survival using very scarce extracellular resources. The following categories of microbes have been documented to exist in Lake Vostok. 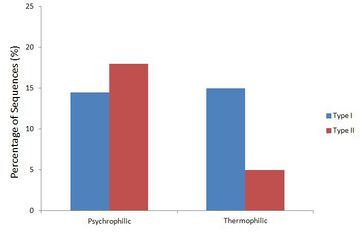 In 2004, the first microbe isolated from Lake Vostok was Hydrogenophilus thermoluteolus, a species previously found only in the hot springs of Japan [6]. They are a species of chemolithoautotrophs which inhabit warm regions of the lake near the hydrothermal vents and within type I ice [6]. Thermophilic sequences within the lake suggest bacteria similar to Thimonas sp. and Herminiimonas arsenicoxydans, which are also expected to depend on the hydrothermal vents. These organisms metabolize arsenic and sulfur released from the vents [7].

Most of the microbes in Lake Vostok are considered psychrophilic or psychrotolerant. Although specific microbes have not been isolated, metagenomic data analysis of the lake revealed DNA sequences from various species of Psychrobacter [5]. This is a genus of Gram-negative bacteria which possess a multitude of cold-active enzymes. These enzymes allow the organism to metabolize carbon at temperatures as low as -15 °C [8]. Unlike the thermophiles which live exclusively in liquid water, psychrophiles are also able to inhabit the solid ice, where the diffusion rates of nutrients is magnitudes lower [9]. The psychrophiles overcome this barrier by residing in liquid veins within the ice core, where they have much better access to liquid water and nutrients [9]. Type II ice was found to contain a larger proportion of psychrophilic DNA than thermophilic DNA [5]. This implies that type II ice forms farther away from hydrothermal vents, which explains its lower mineral and nutrient content.

Metagenomic data analysis also revealed a small number of halophilic and halotolerant gene segments [5]. These sequences are found in Jeotgalicoccus halotolerans, Nesterenkonia halotolerans, and species of Halomonas suggesting areas of high salinity within the lake [5].Soluble Mg2+, Na+, Cl-, and SO42- are found in regions of the lake near type I ice [10]. These salts enter while the ice base melts and is maintained by the water recirculation.

Lake Vostok’s high nitrogen content supports an ecosystem dependent on the nitrogen cycle. Metagenomic analysis have found DNA sequences capable of performing nitrogen fixation, nitrification, denitrification, and nitrate reduction [7]. Other sequences also suggested that there are two main modes of carbon metabolism among the microbes within the lake: the reductive pentose phosphate cycle and the reductive TCA cycle. Carbon dioxide is used as the carbon source and NADH/NADPH is used as the electron donor [7]. Electron donors such as H2, Fe2+ and NO2- are also available to support lithotroph growth [3]. 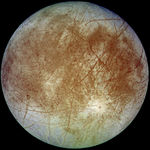 Europa, one of Jupiter's many moons (Wikipedia).

The study of microbial life in Lake Vostok provides insight to the mechanisms of survival used by many different bacteria. Novel technologies can be based upon the heat cold, and salt-resistant macromolecular machinery found within thermophiles, psychrophiles and halophiles. Many new leading technologies are expected to be based on breakthroughs in within this field, such as the heat-stable Taq polymerase used for polymerase chain reaction (PCR). Since human pollution of natural habitats is on the rise, the preservation of microorganisms which inhabit exotic niches is becoming increasingly important [11].