The British Petroleum oil spill (BP oil spill), also known as the Deepwater Horizon oil spill, is the largest oil spill in the history of the petroleum production industry [11] . Due to the magnitude of this event and environmental and political damage it caused, a significant scientific effort has been made to study its effect on ocean and coastal ecosystems. This incident was caused by an explosion of the Deepwater Horizon offshore drilling unit located in the Gulf of Mexico capable of drilling down to 9144 meters deep under water [11] . After the explosion, oil gushed from the sea floor releasing an estimated 5.84x108 litre of crude oil into the ocean [11] . Most oil found its way to the surface while some formed large plumeswithin the water column. Oil sheencould be seen on the surface of the water covering up to 180 000km2 [3] . Oil plumes as large as 17 kilometers in diameter were detected just beneath the surface [11] . Oil spill clean upusing oil bloom containments, skimmers, and separators were immediately deployed. Cleaning efforts were implemented soon after that using surfactants to disperse the oil to create more surface area for decomposition by microorganisms and other forms of bioremediation . Several species of microbes played a significant role in the cleanup of BP oil spill which otherwise would not had been possible.

Effects on Marine and Coastal Ecosystems 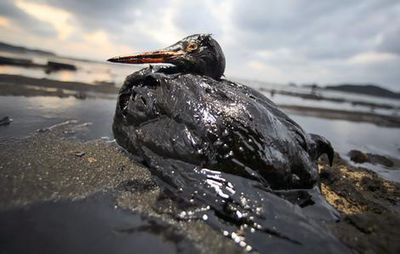 Figure 1: A bird seen stranded due to its oily feathers.

Benthic and highly productive habitats such as marshes and coastal wetlands in the affected areas were contaminated with crude oil and other petroleum by products; they are harmful to many of the organisms that thrive there [2]. Dead bodies of marine birds, fish, and various other affected animals can be seen floating all over the area. Aquatic birds are immobilized by the oil because the oil penetrates the porous feathers and therefore affecting their ability to catch air. Fish are intoxicated by the petroleum products and are unable to cope with the stress. Marine mammals such as dolphins, whales, and seals are also greatly affected by this horrific event. 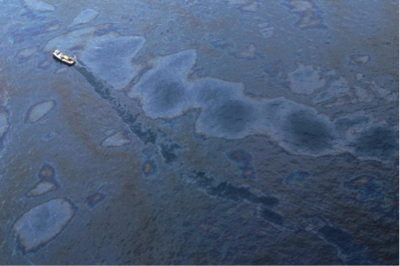 Figure 2: Oil sheens on the surface of the ocean can be seen from miles away. Figure 3: Oil rushing out from the underwater-uncapped oil gusher.

Crude oil is a heterogeneous hydrophobic compound that contains four classes of molecules: saturates, aromatics, asphaltenes, and resins [10] . Being hydrophobic compounds that are less dense than seawater, a large amount of such substances will form sheens on the ocean surface. This oil sheen decreases the amount of sunlight reaching organisms in the water and forms a barrier between the air and water, blocking oxygen and other necessary nutrients from diffusing into the water. Phototrophs and obligated aerobic organisms will be affected due to the lack of light or oxygen respectively. A decrease in the number of phototrophs, with them being primary producers in marine food chain will greatly impact all other organisms.

Microorganisms live in environments of delicate balance; adding such large amounts of hydrocarbons will disrupt this balance with severe consequences [5]. A study based on samples taken at several beaches in the Gulf of Mexico before and after the BP oil spill showed a drastic change in the microbial community at the locations [5]. Pre-oil spill samples are what someone would expect in other beaches of similar location without contamination, which include a variety of diverse organisms that exhibit high level of interactions [5]. Post-oil spill samples on the other hand, contain mostly oil-degrading organisms with drastic decrease in diversity. Selective pressure placed upon communities of organisms by the large increase of petroleum and other petroleum derivatives selects for the survival of organisms that can use petroleum and derivatives as energy, electron, and or carbon source [5]. This places stress on many marine and shore habitats by placing an imbalance of nutrients through decreasing the amount of oxygen in the environment, since most petroleum degradation are aerobic processes. With a decrease in microbial diversity and members in these communities, many nutrients cycles are disrupted; this further affects microbes and organisms in general. Figure 4: Just one of the many affected marsh lands and the devastation petroleum has caused.

Traditional methods of oil spill cleaning include processes such as controlled burns, skimmers, vacuum pumping, low-pressure flush, manual mechanical cleanup, gelling agent, and many more [3], most of which merely remove the hydrocarbon from the affected water or environment and transfers them to another location. Certain techniques described above such as low-pressure flushing and vacuum pumping can disrupt and cause long term damage to sensitive microbial environments such as marshes and wetlands [3]. These traditional techniques are limited in effectiveness and are expensive due to the large area affected by the BP oil spill. An alternative technique that has longer-term remediating effect is the use of microbes in oil cleaning. Degraded hydrocarbons mineralize to carbon dioxide, used in biomass or expelled as other hydrocarbon derivatives that are most likely used by other microbes. A large scale of bioremediation was deployed during the BP oil spill crisis due to its effectiveness and lower cost [8]. Two methods of bioremediation were used: bioaugmentation and biostimulation [11].

Bioaugmentation is the inoculation of a relatively small amount of oil-degrading microbes into an affected area. Appropriate nutrients and dispersants are used in conjunction to help induce growth and increase surface area between oil and microbe by emulsifying the oil respectively [10](refer to Figure 4). Although several problems might arise, this is usually the preferred method when indigenous microbes are incapable of degrading hydrocarbon. Problems include the fact that microbes being introduced may require different conditions in order to grow, indigenous organisms out compete the new comers, and if growth is observed, it may not reach a high enough concentration to have an observable effect on the degradation of oil.

Figure 5: Dispersants are used to break oil droplets into smaller particles so surface area can be increased. More bacteria can directly come in contact with the oil. Comparison of A) and B), 3 times more bacteria can be attached to the dispersed oil droplet of the same area.

Biostimulation is the adding of nutrients and other growth limiting resources to stimulate the growth of indigenous oil-degrading microbes to increase the rate of remediation. This is the preferred method when members of the indigenous microbial community are capable of degrading oil [10]. Limiting nutrients are usually nitrogen, sulfur, phosphate, and sometimes iron because when a large amount of hydrocarbon is present, microbes will degrade it by anabolizing it into biomass [10]. This is done through the production of proteins and other cellular elements that require a large amount of nitrogen, phosphorous and sulfate. The main nutrients added to stimulate the growth of oil degrading microbes during the BP oil spills are nitrate and sulfate fertilizers [6].

Based on 16S rRNA gene community analysis, the most prominent group of hydrocarbon degraders detected at contaminated sites were from the genus Pseudomonas [9]. Petroleum is constantly seeping through cracks and vents on the ocean floor; organisms like Pseudomonas thrive in petroleum present environments have evolved mechanisms that would allow them to use the energy rich hydrocarbons as a nutrient source [10]. Members of the genus Pseudomonas have a very versatile metabolism and are ubiquitous; they possess a set of genes that allow them to degrade most petroleum compounds including polyaromatic hydrocarbons (PAH), which are the most stable and recalcitrant compounds proven to be toxic to many organisms including humans [4]. The genes code for ring-hydroxylating dioxygenases, which are necessary to cleave the aromatic rings of PAH [4]. Their versatile metabolism and their ability to thrive in various conditions make them a good candidate to be used for bioaugmentation.

Much research has been done on microbes and their implications in oil spills, but there are still much more to know. Below is a summary of areas in which more research needs to be done.

1) The use of dispersants can be harmful to the environment but it is necessary to increase the rate of crude oil degradation by microbes. What are some alternative methods to increase surface area of hydrophobic molecules on water surfaces?

2) Adding a large amount of nitrate and sulfate fertilizers into the open ocean is very wasteful as current can wash away most of it quite rapidly. What are some ways to prevent the wash off of fertilizer or is there a way to release the fertilizer that would optimize their use while maintaining maximum growth of microbes?

3) A large amount of carbon dioxide is released into the atmosphere as a waste product of oil degradation. This adds to the already soaring greenhouse gas concentration. Is there a way to inhibit full degradation of petroleum while producing non toxic organic compounds?

4) Is there a way to isolate the genes responsible for oil degrading microbes and introduce them to indigenous microbe populations that are incapable of oil degrading? This will optimize bioaugmentation as microbe being altered is indigenous to that particular environment.