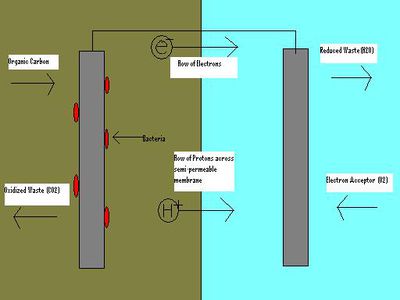 Figure 1: A general Schematic of a Microbial Fuel Cell. Organic Carbon enters into the anaerobic anode chamber, where it is oxidized, potentially to CO2, by the Electricigenic bacteria represented by the red ellipses. Electrons flow through an external circuit from the anode to the cathode chamber, where they reduce diatomic oxygen to water. Protons flow from anode to cathode through either a salt bridge or a semi-permeable (allows the passage of protons but not oxygen) membrane, and in doing so compensate for the transfer of negative charge in the form of electrons and therefore complete the circuit. Image Credit: Original Image. .

A microbial fuel cell (MFC) is a device which utilizes microbial respiration to convert chemical energy into electrical energy. Like any electrochemical cell, an MFC requires an anode wired to a cathode to facilitate the flow of electrons to the cathode and an electrolytic medium to allow positive ions to diffuse to the cathode [6]. Unlike a purely chemical electrical cell however, there is no metal catalyst required at the anode. Instead, in an MFC the anode is exposed to a culture of electricigenic bacteria, which obtain electrons from organic molecules. These bacteria use the anode as an external terminal electron acceptor, as the electrons transferred ultimately travel to the cathode where they reduce oxygen [1]. Since the most inexpensive and abundant sources of carbon available are often industrial wastewaters, MFC’s have great potential for improving the efficiency of bioremediation for industrial wastes, by allowing energy to be recovered during effluent processing. [10].

The direct transfer of electrons to an anode by microorganisms was until recently thought impossible, and the production of useful current only possible through the use of exogenous mediators, which can be expensive, toxic, and unstable [7]. These mediators function by acting as an oxidizing agent for respiratory proteins in the outer membrane of the electricigenic bacteria, and subsequently transferring the electrons obtained to an anode [2]. However, some organisms have been shown to have developed physiological processes allowing them to utilize an anode as a terminal electron acceptor without the addition of an exogenous mediator [7]. The organisms described here do not, however, provide a comprehensive list of potentially electricigenic bacteria, and are meant simply to provide examples of key strategies of electron transfer.

Several members of the family Geobacteraceae, including Geobacter sulfurreducens and G. Metallireducens have been shown to be capable of transferring electrons to an anode through direct contact. The exact mechanism by which this transfer occurs is not fully understood, but it is thought that they use some form of electrochemically active protein present on outer surface of the cell, and there is some evidence to suggest that electrically conductive pilli may be involved in the process of electron transfer as well [8]. Although there is no known evolutionary pressure for these bacteria to be able to generate an electrical current, it is likely that the mechanism used by Geobacteraceae cells to transfer electrons is the same that they use to reduce insoluble extracellular deposits of Fe(III) and Mn(IV), both of which Geobacteraceae spp. have been shown to be well adapted to utilize as an electron acceptor [2] 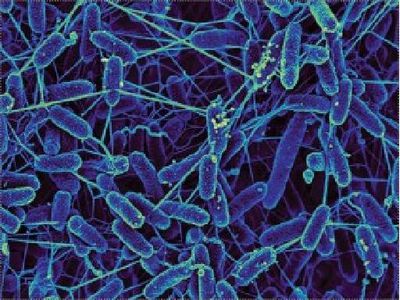 Figure 2: Photograph taken by electron microscopy of a Shewanella oneidensis electricigenic bacteria with conductive pilli extending between individual cells. Image Credit: US DOE. 2009. New Frontiers in Characterizing Biological Systems: Report from the May 2009 Workshop, DOE/SC-0121, US Department of Energy Office of Science. .

Certain Shewanella spp.(Shewanella oneidensis) produce endogenous electron mediators, which are reversibly reducible molecules that function similarly to exogenous mediators, except that the bacteria biosynthesizes them [9]. The use of mediators is confers an advantage by facilitating allowing access to large insoluble electron acceptors, such as Fe(III) deposits or anodes, without having to directly contact the surface of such molecules. This means that the number of cells a given surface area of an electron acceptor can oxidize is effectively increased, and that cells can have access to the electron acceptor from farther away. However, there is a significant metabolic cost associated with the production of these mediators, and in open systems the mediators can be lost and therefore ineffective [3].

In order for MFC’s to reach the point where they can produce electricity at a price competitive with other sources of energy, a greater understanding of MFC design and the interactions that occur between electrigens and the fuel cell anode needs to be obtained. One key area of research is in anode engineering and design. The number of organisms that have access to the anode, and therefore the number of electrons that can be transferred, is limited by the surface area of the anode. In addition, the internal resistance of the MFC can have a significant impact on power output. To overcome these issues, advanced materials, such as intertwined carbon nanotube textile fibers, have been developed. Carbon nanotube textile anodes not only provide a dramatic increase in the area available to receive electrons, but also greatly increase the efficiency of the system due to the decrease in resistance resulting from the increased surface area. [4].

Another route to making microbial fuel cells more feasible is by using them for microbial electrosynthesis, rather than electrogenesis. Although not truly an MFC, electrosynthetic reactors operate by essentially reversing the principles of a traditional MFC. Instead of utilizing an anode as an electron acceptor, the microbes can use a Cathode, to which a low level of current is applied, as an electron donor. These electrons can then be used by the organisms to reduce and synthesize useful organic molecules, such as butanol, allowing electrical energy to be changed into chemical energy [5].