Difference between revisions of "Micrococcus" 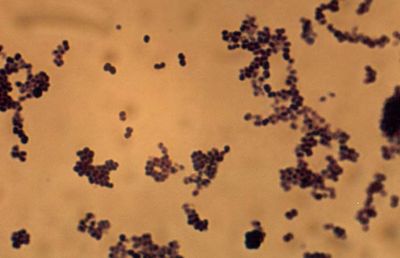 M. luteus can be found in many places such as the human skin, water, dust, and soil. Micrococcus was first isolated by Alexander Fleming in 1929, as Micrococcus lysodeikticus before it was known as micrococcus luetus (Ganz et al, 2002) Micrococcus is generally thought of as harmless bacterium, but there have been rare cases of Micrococcus infections in people with compromised immune systems, as occurs with HIV patients.

Hybridization studies show no close genetic relationship among the species of Micrococcus. For example, M. luteus and M. lylae are 40-50% genetically different. M. luteus has a G-C content of 65-75 mol%. M. varians has a G-C content of 66-72mol% (Fox, 1976). About half of the strains of M. luteus were found to carry plasmids 1 to 100MDa in size. So far two genome sequences have been done, one on Micrococcus sp. 28 plasmid pSD10 and another on Micrococcus luteus plasmid pMLU1.The M. luteus genome encodes only four sigma factors and 14 response regulators, a finding indicative of adaptation to a rather strict ecological niche;mammalian skin (Young et al, 2009)M. luteus is also highly sensitive to beta-lactam antibiotics. This may be due to the presence of a reduced number of penicillin-binding proteins and the absence of a wblC gene, which plays an important role in the antibiotic resistance in other actinobacteria (Young, 2009) 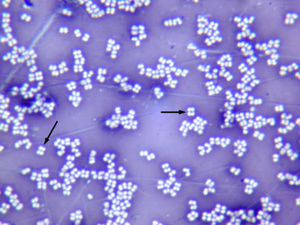 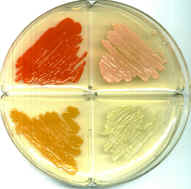 Micrococcus are Gram-positive cocci that are 0.5 to 3.5 micrometers in diameter and usually arranged in tetrads or irregular clusters. They are generally strict aerobes and can generally reduce nitrate. M. luteus oxidizes carbohydrates to CO2 and water, and it does not produce acid from glucose as well as it does not make arginine dihydrolase or b-galactosidase. Some Micrococcus are pigmented bacteria; for example, M. luteus produces yellow colonies and M. roseus produces redish colonies. Micrococcus species are oxidase-positive, which can be used to distinguish them from other bacteria like most Staphylococcus species, which are generally oxidase-negative.Micrococcus species can also be differentiated from staphylococcus species by the Taxo A Bacitracin disk test. Micrococcus species are sensitive to Bacitracin while staphylococci are resistant. Defining characteristics of Micrococcus are the ability to aerobically produce acid from glucose glycerol, aesculin hydrolysis, arginine dihydrolase, major pigment production, motility, and conversion of nitrate to nitrite (Smith et al. 1999).Micrococcus luteus can synthesize iso- and anteiso-branched alkenes by the head-to-head condensation of fatty-acid thioesters [coenzyme A (CoA) or acyl carrier protein (ACP)].This ability could be harnessed to make biofuels (Pereira et al, 2012)

M. luteus has been isolated from human skin, animal and dairy products, and beer. It can be found in many other places in the environment, as well, like water, dust, and soil. M. luteus on human skin breaks down compounds in sweat into compounds with bad odor. M. luteus can grow well in environments with little water or high salt concentrations. M. varians is the second most frequently isolated species of micrococcus after Micrococcus luteus (Kloos & Musselwhite, 1975). They grow optimally at 37oC and can be easily grown on inorganic nitrogen agar or Simmon's citrate agar. Although some, like Micrococcus antarcticus, are cold-adapted, and have been found living in Antarctica and in marine environments. 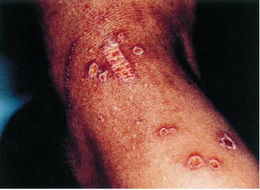 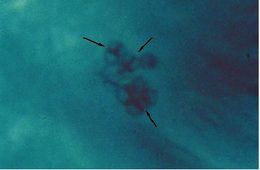 Falk, D., and Guering S,J.,(1983) Differentiation of Staphylococcus and Micrococcus spp. with the Taxo A bacitracin disk.Journal of Clinical Microbiology,18(3) 719-721