A Microbial Biorealm page on the genus Micromonas pusilla

M. pusilla from The Swedish Meteorological and Hydrological Institute (http://www.smhi.se)

M. pusilla is an aquatic microorganism which is distributed worldwide. It is currently the only classified species within the genus Micromonas. M. pusilla is generally less than 2 µm in length and is therefore classified as a picophytoplanktonic species. It is pear-shaped with a single flagellum which has microtubules at the end. M. pusilla is one of the most abundant microorganisms within marine ecosystems and it is the smallest known single-celled eukaryotic organism. 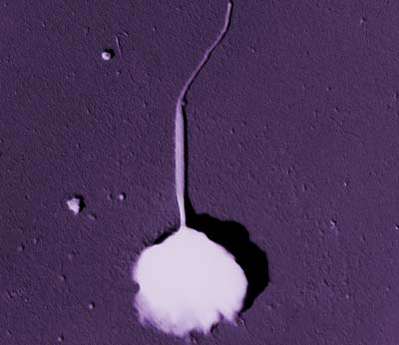 M. pusilla from the Encyclopedia of Life (http://www.eol.org

Research is currently being done on the genome of Micromonas pusilla, so there is not an abundance of knowledge on it. The genome is 15 Mb.

M. pusilla is a green algal species and gains energy through photosynthesis. It uses carbon fixation to produce organic molecules, which is driven by photosynthesis. The microorganism contains a nucleus, a chloroplast, and only one mitochondrion which produces adenosine triphosphate, or ATP, used for cellular energy. M. pusilla also contains a Golgi body which is an organelle used in the process of protein and lipid production and synthesis. M. pusilla's swimming and other movements are powered by a single flagellum. 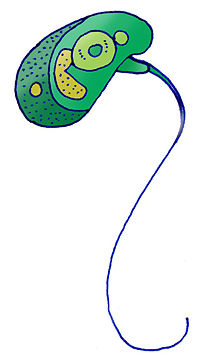 M. pusilla is an aquatic picophytoplankton and inhabits waters around the world. Clear water is necessary in order for the microorganism to obtain light for photosynthesis. It is an important food source for many organisms in aquatic environments. The most current research using 18S rRNA analysis suggests the existence of several clades specializing in different ecological niches within the species. No definitive conclusions have yet been reached on niche partioning. The ecology of this microorganism has not been extensively studied and would be an interesting topic for further research.

Scientists are currently mapping the genome of M. pusilla. This knowledge will permit a better understanding of the picophytoplankton.

Researchers have isolated a double-stranded RNA virus from the family Reoviridae (MpRNAV-01B) that infects M. pusilla. The virus poses a threat to the aquatic community because of picophytoplankton mortality and the effect(s) that would have on the food chain in the ecosystem. This research is also important because it is the first known virus with a genome composed of eleven segments infecting protists.

In the study done by Corhlan and Harrison, they measured nitrogen uptake rates of M. pusilla for ammonium and nitrate. They found that the uptake rate of ammonium is lower but more constant than the rate of nitrate. This research is important because it shows that M. pusilla may use nitrogen reduction.