Difference between revisions of "Microsporidia"

A Microbial Biorealm page on the Microsporidia 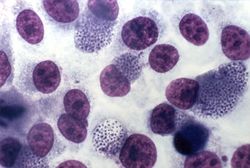 Microsporidia (syn. microsporida) is a highly diverse phylum with which approximately 150 genera and over 1200 species are associated. These eukaryotic parasites infect mainly arthropods and fish, but have gained relevance in the medical community in the past few decades because of their increased infection of humans suffering from compromised immune symptoms, mainly associated with HIV. They also infect other mammals; the first known infection of a vertebrate was in a rabbit in 1922.

In arthropods, members of the genera Agmasoma, Amesoma, and Pleistophora infect and replace host tissues, resulting in eventual death and rendering the product unmarketable. They have a large negative impact on the fishing industries whose catches they may infect. Certain microsporidians are also extremely pathogenic in insects, and one, Nosema locustae, is marketed as a controllant against insects such as grasshoppers. Other species of Nosema, however, have a negative impact economically, since they infect beneficial insects such as honey bees (Nosema apis) and silkworms (Nosema bombycis). The clinical manifestations of the parasite in these varied hosts differs widely depending on the species, both of host and parasite.

At this time there are 13 microsporidians which are known to infect humans, primarily affecting those with immunocompromised disorders. The most prevalent pathogens of humans include Enterocytozoon bieneusi, whose clinical manifestations include diarrhea and pneumonia; Encephalitozoon cuniculi, whose symptoms include encephalitis and nephritis; Nosema sp., which affect the cornea; and Encephalitozoon intestinalis, which causes diarrhea and nephritis.

Microsporidians have some of the smallest genomes known among eukaryotes; because of size constraints, their genomes do not grow with their genes. The genomes of thirteen microsporidians have been measured, ranging in size from 19.5 Mbp to 2.3 Mbp. Except for their small size, the genomes are characteristically similar to those of all eukaryotes. Once thought to be among the most primitive eukaryotic organisms, microsporidians are now known to possess some highly specialized organelles, utilized in the infestation process. These revelations have caused taxonomists to conclude that microsporidia are highly evolved fungi rather than ancient eukaryotes. Their reduced genomes and gene structures, the result of gene loss and compaction, reveal a highly evolved system rather than a primitive one. The eleven chromosomes of Encephalitozoon cuniculi's genome has been fully sequenced, allowing scientists to hypothesize that some of the microsporidia's "missing" organelles are instead simply derived from typical eukaryotic organelles. For links to the complete E. cuniculi genome, click here.

The most important and prevalent form taken during the microsporidian life cycle is that of a highly specialized single cell called the spore. When in this form the parasite is most easily recognizable, and individual species are identifiable. This is also the only form which is viable when the parasite is not infecting a living host. Spore morphology varies according to species, ranging in size from 1 - 40 microns, and taking on an ovoid, rod, spherical, or crescent shape. The spore features two extracellular walls surrounding a normal unit membrane, which contains the sporoplasm. This sporoplasm, which is the infectious material of the spore, contains one or two closely aligned nuclei, ribosome-enriched cytoplasm, and organelles used for infection. The most prominent among these organelles is the polar tube, located at the apex of the spore and affixed to the spore by way of an anchoring disk. From this anchoring disk the polar tube extends to the posterior end of the spore, where it comes into contact with another infection organelle, the posterior vacuole.

Stages of germination in microsporidia. Image from Annual Review Microbiology.

Spore germination is initiated by a signal from the species' environment; the exact nature of these signals is not known for certain. Upon receiving this signal, the spore swells and the sporoplasmic membranes break down, culminating in the rupture of the anchoring disk. The polar tube is basically shot out of the spore, propelled by the internal pressure. After the polar tube is completely expelled, the sporoplasm enters the tube. There is enough force behind the polar tube to cause it to pierce the membrane of any nearby host cell, in which case the sporoplasm will enter and take over the other cell. The entire germination process takes as little as two seconds to be completed. Once inside the host cell, the parasite (referred to at this stage as the "meront") begins a series of developmental changes, which differ according to the species. More spores are produced through sporogony and eventually take over the host cell. In eukaryotic cells, energy is generated in the mitochondria; however, the cells of microsporidia reveal no such organelle. Microsporidia's exact mode of metabolism has yet to be fully understood, but they are obligate heterotrophs.

Because the microsporidian species are so greatly numbered and their hosts so varied, these parasites can be found in many types of ecosystems. Researchers studying the difference between species which infected terrestrial hosts and those which infected aquatic hosts found that overwhelmingly terrestrial species could survive in low temperatures, while aquatic species could not. This is most likely because the terrestrial parasites need to survive cooler climates during the winter so that they can initiate infections in the early spring. Exposure to extremely dry conditions yielded similar results, with some species unable to survive. Similarly, the majority of microsporidians are unable to infect hosts when exposed to overly wet or humid conditions, possibly because an excessive amount of water causes the spores to germinate prematurely. Direct exposure to sunlight kills all species of microsporidia fairly quickly; some may be able to survive for a short amount of time, but most expire very quickly. Spores are spread from host to host by way of fecal matter, contaminated water and food, and inhalation. In humans, the most effective way to prevent the chronic diarrhea caused by microsporidia is cleanliness and decontamination of food. Currently human forms of these pathogens are most prevalent in countries or areas with high rates of AIDS among the population.