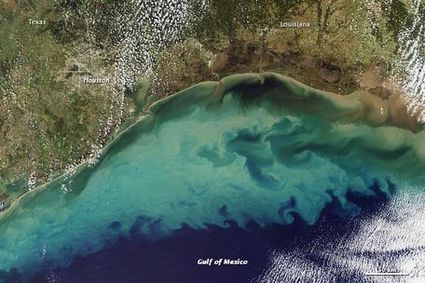 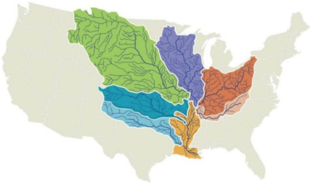 The excess of nutrients, largely nitrogen and phosphorus from runoff fertilizers and treated sewage discharge from urban areas, encourages the growth of algae and development of algal blooms.

In a natural system, the presence of these nutrients would not be harmful, however the increase in nitrogen and phosphorous due to anthropogenic factors contributes to a rapid growth of algae in a short period of time. When these algae die, they become a food source for bacteria, which consume dissolved oxygen as they decompose the algae, resulting in areas of the ocean with oxygen levels that are insufficient to support aquatic life, especially when there is strong stratification that prevents reoxygenation of the water column. As a result of this hypoxia, the microbial community in the water column shifts dramatically. This hypoxic zone can cover anywhere from 20%-50% of the Gulf of Mexico water column during the summer months and can persist through September.[7]

As the water column becomes anoxic in a dead zone, the biogeochemical profile shifts greatly. As available oxygen decreases, anaerobic metabolisms, such as nitrate and sulfate reduction and anaerobic ammonia oxidation become more prevalent.[12] In the absence of oxygen, there is still a substantial microbial community present in the water column along with increased nitrate and nitrate. The makeup of the water column shifts as a result of the formation of the dead zone. The image below illustrates this change in an anoxic oxygen minimum zone, which tend to have similar microbial profiles as dead zones given the shared absence of oxygen between the two. 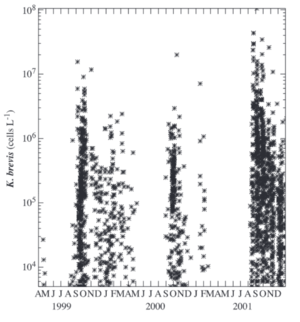 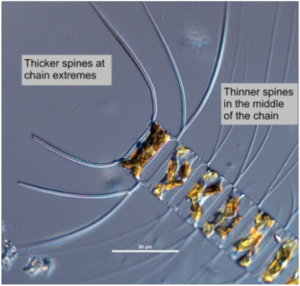 Typically, cyanobacteria, microflagellates, and dinoflagellates are the organisms responsible for the formation of red tides and they kill marine species by paralyzing their respiratory systems. Algae species associated with these blooms produce potent toxins, which are liberated when eaten by other organisms. Other algae are capable of killing other organisms without toxins. For instance, the serrated spines of certain nontoxic algae, like that of certain Chaetoceros diatom species, can lodge in fish gills, leading to death.Cite error: Closing </ref> missing for <ref> tag The toxins created by these different microbes can bioaccumulate and impact humans.