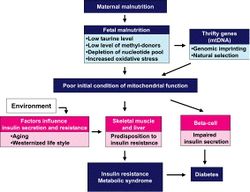 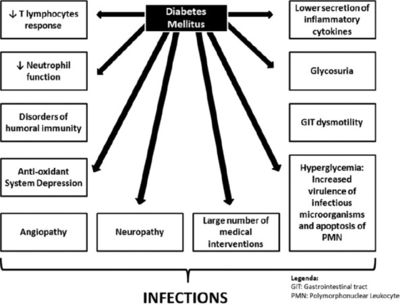 Diabetes is a case where blood sugar levels are high. Most of the diseases associated with diabetes are non-contagious and multifactorial. It is common to mention heart problems, kidney diseases, stroke and hypertension along with diabetes. However, high blood sugar level also interferes with the body's immune system and entails lower responsiveness to infections. When glucose breaks down, dicarbonyls are formed. Dicarbonyls like methylglyoxal (MGO) and glyoxal (GO) alter the structure of human beta-defensin-2 (hBD-2) peptides, hobbling their ability to fight inflammation and infection. Thus, diabetic patients have decreased immune responses to bacteria.[17]The hyperglycemic environment also favors immune dysfunction (e.g., damage to the neutrophil function, depression of the antioxidant system, and humoral immunity), micro- and macro-angiopathies, neuropathy, decrease in the antibacterial activity of urine, gastrointestinal and urinary dysmotility, and greater number of medical interventions in these patients.[18]

The Staphylococcus species are the major infection causing bacteria seen in Diabetic patients. The species cause a wide variety of diseases starting from foot infection to pneumonia. Sometimes it is hard to attribute a certain disease to a single bacteria; usually, there is a combination of Staphylococcus species and other types of bacteria. The species generally have a symbiotic relationship to the human body; they are commensals who occupy the skin and nostrils with other bacteria. However, they act opportunistic and get pathogenic when our immune system is compromised. Moreover, the species have adaptively evolved so that the immune system can't respond effectively in case of reinfection. Staphylococcus aureus can O-acetylate its peptidoglycan so that the cell wall doesn't breakdown. That in turn limits the induction of pro-inflammatory signals required for optimal Th17 polarization. Th17-T helper 17 cells- are types of T helper cells known for their production of interleukin 17 (IL-17). [19] IL-17 is a pro-inflammatory cytokine that induces the chemokines that signal phagocytes to come and engulf the pathogens.[20]This way the species makes sure that the immune system can't establish memory of infection. [21] In addition to not being killed by the immune system, the species is known to produce toxins that have the potential to kill the innate immune cells.[22]


Bacterial pneumonia- a disease caused by the bacteria Streptococcus pneumoniae- is a very common infection that affects diabetic patients.The bacteria is normally found in air and the upper respiratory tract, but healthy bodies with strong immune systems can effectively prevent infection. However, people who have had other infections and surgery have trouble managing the pathogen. Diabetic patients join the latter group. On average, diabetic patients are hospitalized 0.8 days more than non diabetic patients for community-acquired pneumonia. The mortality rate from pneumonia is also significantly higher for diabetic patients.[23] The effects are even more severe when the pneumonia is acquired from a healthcare center. HCAP(Health Care Acquired Pneumonia) is usually caused by a <Staphylococcus species called Staphylococcus pneumoniae . Since the bacteria live around the hospital, they have evolved to resist the actions of antibiotics.