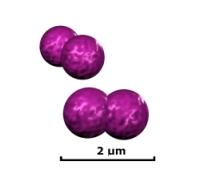 Moraxella catarrhalis is a gram negative, diplococcus, aerobic infectious pathogen that is a common cause of upper respiratory, middle ear, and eye infections. It is resistant to many ß-lactam drugs such as penicillin, amoxicillin, and ampicillin. 'M. catarrhalis' can be found commensally in the respiratory tract of some people, living without infections symptoms or promoting host immune response. In adults, the rate of colonization seems to be around 3% of healthy adult population [1]. This rate seems to be much higher in children, especially in infants in their first year of life. Depending on factors such as socioeconomic background, climate, and location, colonization rates have varied anywhere from 28% in Sweden, to 100% of Australian Aborigines [2,3]. It is estimated that M. catarrhalis causes nearly four million cases of middle ear infection a year which, while not particularly life threatening, places a burden of nearly two billion dollars on the US health care system [4]. There are two distinctive strains of M. catarrhalis: serosensitive, which seems to be less virulent, and seroresistant, which has complement resistance and adherence mechanisms that make it particularly virulent [5].

Because of its ability to live commensally, the spread of M. catarrhalis is generally from person to person in a hospital setting, or nosocomially [6]. Infections seem to occur more in persons with complications of the respiratory system such as COPD or infants with underdeveloped immune systems. Additionally, if a patient is diagnosed with symptoms of an infection, it can be difficult to determine if M. catarrhalis is the cause due to its ability to live commensally, and as similar symptoms can arise through infections from S. pneumoniae and H. influenzae.

The incubation period of M. catarrhalis is not well understood. This is because it is a commensal organism in many persons and can live asymptomatically for a long period of time. However, this suggests that it is an opportunistic pathogen because it will show symptoms in those who have undergone significant stress to their nasopharynyx such as patients with COPD.
It is believed that bacterial stress such as heat shock could cause activation of pathogenic mechanisms within M. catarrhalis [7]. This type of reaction is well documented in other organisms like E. Coli, B. Subtilis, and S. aureus. This may account for the prevalence of the disease during the colder seasons such as fall and winter. It has been found that prolonged exposure to conditions at 26°C increases the abundance of mRNA transripts coding for adhesion molecules associated with the pathogenicity of M. catarrhalis [8].

M. catarrhalis can be a commensal organism found in the respiratory tract of young children and infants, and in a small percentage of adults depending on factors such as location, age and health. If symptomatic, it commonly presents as otitis media, or infection of the middle ear, in children and as an upper respiratory infection in adults. Because of widely varying colonization rates throughout studies, more information must be gathered to understand these processes [9]. 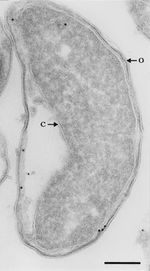 Since the discovery of a ß-lactamase-positive strain of M. catarrhalis, the resistance of the species to ß-lactam drugs has increased at a rate much greater than other bacterial species. More than 90% of known isolates are ß-lactamase-positive [10]. The origins of this structure are unknown, as it seems to be very unique to the species, existing at two forms: BRO-1 and BRO-2. Unlike other gram negative bacteria, the enzyme is lipidated and membrane associated. It is possible that this might have evolved from a similar enzyme found in gram positive bacteria. The evidence of this is the distinctive G+C content of the BRO region compared to the rest of the genome [11]. BRO-1 expressive strains seem to have a greater antibiotic resistance than BRO-2 strains. This does not result from a difference in enzymatic activity, but from variance in expression [12].

CopB is a surface protein expressed that is believed to be involved in acquisition of iron from host lactoferrin or transferrin molecules. Studies have shown that CopB is expressed much more readily under conditions of low iron and that CopB will bind with human lactoferrin molecules when they are under heavy load [13,14]. Anti-CopB antibodies have been found in blood serum of patients previously infected and have been studied for potential methods of enhancing clearance. Although M. catarrhalis is strictly a human pathogen and results are therefore inconclusive, animal models have shown increased clearance in CopB knockout infection of rats [15].

The function of OMP CD is not very well understood. It shares some characteristics with the OprF porin Pueudomonas, however its exact function has not been proven. Like CopB, studies have been conducted to examine it as a potential basis for vaccines. Again, the certainty of animal models is uncertain, but mice that have been immunized with CD have shown much better bacterial clearance rates than controls [16].

uspA1 and uspA2 is a dimeric protein associated with cell adherence to human epithelial cells. It has been shown that isolates of the protein have a high affinity to extracellular fibronectin, a component of integrands, and vitronectin [17]. It has also been observed that uspA2 gives a certain degree of resistance to the bactericidal qualities of blood serum. Knockout strains, again in mice, were extremely sensitive to the toxicity of human serum, whereas uspA1 and wild type strains were unaffected [18]. These proteins are also excellent candidates for possible vaccination due to their homogeneity amongst virulent strains, and because of the immune response that they illicit. Again, mice models have shown better clearance rates in those immunized with uspA1 or uspA2 [19].

OMP E is another protein that little is understood about. Again it shows similar morphology to a porin, OMP F found in E. Coli. However, further research must be done to determine significance. 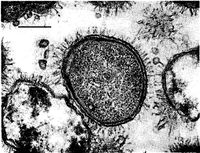 The virulence of pili in M. catarrhalis is a topic of debate. In a study of virulence of pili presenting strains versus non pili presenting strains, at 6 hours after colonization, the acute ostitis media score for pili strains was significantly higher than that of non pili. However, at 24-72 hours, the scores for non pili were significantly higher than pili [21]. This seems to indicate that the initial onset of symptoms from pili forming strains is much more rapid than non pili. However, non pili strands seem to incur a more delayed, drawn out response.

M. catarrhalis has two primary mechanisms that allow it to derive iron from its host, which also might have a function in protecting the organism from the anti bacterial qualities of blood serum. These are transferrin-binding proteins and lactoferrin-binding proteins. They are generally expressed in higher frequency when iron becomes scarce and, because they steal iron from the host, can be very damaging.

Two subunits TbpA and TbpB are involved in binding transferrin to acquire iron for the bacterial cell in the first mechanism. Studies of these proteins have found that TbpA can function in binding transferrin and free iron independently of TbpA, but not vice versa [22]. Additionally, in serum, TbpB illicits an immune response through Ig secretion, but not TbpA. This response seems to be directed towards complement activation against the pathogen [23].

This is also composed of two subunits, LbpA and LbpB, which have been cloned and studied. They are shown to bind lactoferrin molecules to derive iron. Again, the B subunit seems to carry out the actual function of binding and also attracts a strong immune response. This could also be a candidate for a potential vaccine [23].

LOS is a prominent component on the surface of the pathogen. It consists of an A lipid chain linked to ketodeoxyoctulonic acid which is then linked to the inner core. The A lipid is very similar to the typical type of members of the Enterobacteriaceae family. There are also epitopes expressed which are homologous with other gram negative bacteria. LOS serotyping is used to classify strains of M. catarrhalis, the majority fit into category A, B, or C, with some minor exceptions. In a typical human immune response, there are usually antibodies present for each of the three main types, even when the infection only consists of one type [24].

Infections induce very strong inflammatory responses which trigger secretion of IL-1β, IL-6, IL-8, and TNF-α, which cause very strong respiratory symptoms. In young children, the disease most commonly migrates from the nasopharynx to the middle ear via the Eustachian tube and causes otitis media. This is generally more mild than infection from S. pneumoniae with less fever and a lower likelihood of developing a a red bulging tympanic membrane [25].

It can be difficult to definitively diagnose M. catarrhalis based on symptoms alone as the symptoms are common from a number of infections. Usually, a culture sample of either fluid from the ear (if presented as otitis media) or from the nasopharnyx (if respiratory symptoms are present) must be collected and cultured to differentiate between M. catarrhalis, H. influenzae, and S. pneumoniae.

Because infections are usually not fatal in healthy patients and can resolve on their own, infections are usually not treated unless major complications, such a septicemia, occur. In immunocompromised or patients experiencing rare complcations, fluoroquinolones, most second- and third-generation cephalosporins, erythromycin, and amoxicillin-clavulanate can be used to treat infections as most strains are highly resistant to beta-lactam antibiotics.

Because of the high colonization rate and lack of vaccine, it is very difficult to completely prevent infections. Proper hygiene such as hand washing is useful in deterring infection. However, this can be very nearly impossible in young children as many will develop otitis media, however not necessarily from M. catarrhalis.

Persons with chronic obstructive pulmonary disease (COPD), chronic bronchitis, or bronchiectasis are generally more susceptible to infection, as well as those with acquired immunodeficiency disease. Additionally, those who work in cold weather are generally at a higher risk.

Primary response to M. catarrhalis comes from secreted IgG1 and IgG3 which seem to target the uspA protein complexes as well as OMP CD and E complexes [27]. It has also been found that IgA within salivary fluid does not target the organism [28]. This indicates that the primary immune response is to trigger complement against the pathogen. There is evidence that the organism can inter a cell and hide from the immune response, similar to H. influenzae. This has been studied in epithelial cells and pharyngeal lymphoid tissue, but the clinical implications are still unclear [7]. It also seems to ilicit a strong response in terms of cytokines such as IL-1β, IL-6, IL-8, and TNF-α. This leads to a large inflammatory response to the site of infection, causing many of the symptoms.

15. Helminen ME, MacIver I, Latimer JL, Cope LD, McCracken Jr GH, Hansen EJ: A major outer membrane protein of Moraxella catarrhalis is a target for antibodies that enhance pulmonary clearance of the pathogen in an animal model. Infect. Immun. 1993. 61:2003–2010.

Created by Robertson Bootes Beasley, student of Tyrrell Conway at the University of Oklahoma.