Difference between revisions of "Morchella"

A Microbial Biorealm page on the genus Morchella 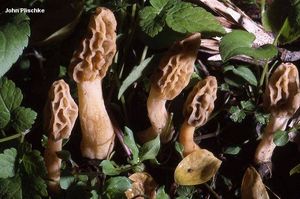 The classic yellow morel, such as the species Morchella esculenta has a delicate flavor combined with a meaty texture. This species is considered to be one of the most prized and delicious of all Morchella. Morchella deliciosa is also an example of a yellow morel. There are several other varieties, most of which are found in North America. They are usually found east of the Great plains, but some species have been found in the Pacific Northwest. Sizes vary, but these fungi can grow up to a foot high. However, M. deliciosa tends to be much smaller than M. esculenta. M. deliciosa are also known for their elongated pits and ridges.

Rotzoll et. al. (2005) used taste dilution analysis (TDA) to understand what causes the unique taste of morels, as well as the mouth-drying sensation they cause. They found that gamma-aminobutyric acid is the agent responsible for the mouth-drying sensation. They located a mixture of S)-malic acid 1-O-alpha-d-glucopyranoside and (S)-malic acid 1-O-beta-d-glucopyranoside, which contributes to the taste. This mixture works along with l-glutamic acid, l-aspartic acid, and succinic acid, which were already known to be important components of the taste. Morchella, like other mushrooms, typically change color when injured. Morchella esculenta have high mercaptan-capturing capabilities.

In order to better understand the genome structure of Morchella, Wipf et. al. (1996) sequenced the internal transcribed spacer (ITS) of the gene coding for rRNA in Morchella esculenta and Morchella conica. There is an ITS length discrepancy between these two species, and their research was an attempt to understand this difference. Rohe et. al. (1991) mapped the linear plasmid pMC3-2. They note that the structure of pMC3-2 has a great deal in common with the genetic elements of adenoviruses. 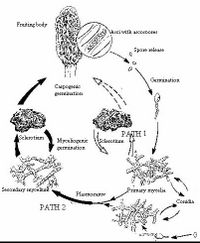 The life cycle of Morchella. The Morel Life Cycle by Tom Volk

Morchella have an important feature that distinguishes them from other fungi. This feature plays an important part in their reproduction, and helps explain why they have been so difficult to cultivate. This characteristic is called the sclerotium. It is a big strucutre, with large cells and thick cell walls. The sclerotium allows the organism to survive in adverse conditions. It also controlls what Morchella will do when it comes time to reproduce. Morchella have two options for germination. The first is to form new mycelium, the second is to produce a fruiting body. Although the production of a fruting body is a fairly simple process, it requires very specific environmental conditions to do so. Morchella will usually just generate new mycelium because the environmental requirements for this process are less specific.

Morchella are heterotrophic. They often form symbiotic relationships with trees, connecting mycelium with roots. Morchella also are often found in disturbed environments, such as areas destroyed by forest fire. Morchella feed off the burnt plant matter and help with decomposition.

In general, Morchella have life cycles similar to other fungi found in Ascomycota.

Morchellas are normally found in forest areas. Their mycelium connect with tree roots; these relationships can be mycorrhizal or saprobic. Morchella typically form relationships with hardwood and conifer trees. They can often be found around ash, dying elms, or in apple orchards. Morchella deliciosa are often referred to as "tulip morels" or "hickory morels" because they are commonly found under these trees. The classis yellow morel is quite common in North America, but is not restricted to just this continent.

Because Morchella fungi are so highly coveted for culinary uses, many researchers are studying the biological diversity of these organisms in order to ensure that they do not become threatened. Dalglelish and Jacobsen (2005) noted that the potential for inbreeding within Morchella esculenta is high, but that this species does not interbreed at high rates. The cultivation of Morchella species has proved difficult. While there are some detectable patterns in habitats and growth conditions, these are not consistent enough to be used for general cultivation.