Difference between revisions of "Moritella marina"

Moritella marina is a gram-negative halophilic psychrophilic facultative anaerobe with curved or straight rods, motile polar flagella that produce PUFA’s (polyunsaturated fatty acids) and DHA (docosahexanoic acid). “Twenty-five years ago, a marine bacterium originally designated Vibrio marinus and later renamed Moritella marina MP-1 was reported to produce high levels of DHA (18% of the total fatty acids). Such high levels of DHA presumably provide this bacterium with the ability to maintain appropriate membrane fluidity in the low temperatures and high pressures of its marine environment.” “Phylogenetic tree of some representatives of the γ-subclass of the class Proteobacteria showing the position of 16S rDNA sequences from some Alteromonas macleodii-related strains and clone sequences from picoplankton DNA from the Mediterranean Sea mesocosm experiment. Sequences of clones 17B161 and 1B161 are available under accession number Y18229 and Y18231, respectively. The tree was calculated by the algorithm of De Soete [16]. The percentage of 500 bootstrap samplings that support branching points above 80% confidence are indicated. The scale bar corresponds to two nucleotide substitutions over 100 sequence positions. The tree was rooted with Roseobacter algicola as an outgroup.” (FEMS, 1998) 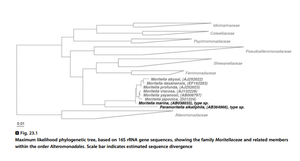 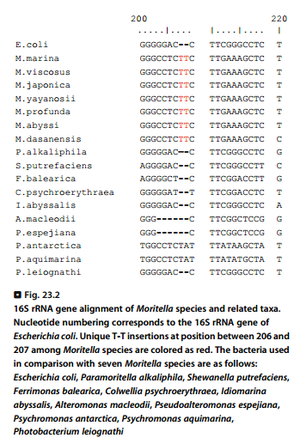 “Sequence variation at positions 73–98 and 181–214 (E. coli nomenclature) within two variable regions of the 16S rDNA of representatives of clone clusters 1–5 and some strains isolated from mesocosm B. Probe target regions are in bold” (FEMS,1998)

Moritella marina has been found in a variety of cold marine environments, ranging from the ocean floor to the intestinal tract of marine organisms. Most Moritella species are thought to live mutualistically amongst marine organisms, but Moritella viscosa has been noted to cause skin ulcers in some cold water fish (Urakawa 2014).

Moritella marina has been noted for having unusually high production of the long chain polyunsaturated fatty acids (PUFAs). When M. marina strain MP-1 was cultured in medium containing cerulenin, a fatty acid synthesis inhibitor, decreases in levels of middle-chain fatty acids and remarkable increases in levels of DHA were observed. These results suggest that the synthesis of middle-chain fatty acids works independently of the synthesis of DHA. M. marina was also found to produce chitonase when induced with chiton (Stefanidi and Vorgias 2008).