The earliest appearance of tuberculosis in recorded human history is in China around 2700BC. Egyptian mummies have also been studied and have been found to contain traces of tuberculosis in their spinal cords. Before the explosion of modern scientific naming, tuberculosis was referred to as consumption, and though the cause was unknown, people of the time found that it spread through close living quarters, and at one point during the seventeenth century it's transmission method was found to be sputum, or phlegm from the upper respiratory system. It wasn't until the eighteenth century that scientists recognized the virus as transmittable between two hosts. It was first isolated by Robert Koch using a staining technique that allowed him to see the microbe. This microbe continues to be devastating throughout the world today, killing roughly three million people a year as estimated by the WHO (World Health Organization.) It is currently transmitted most frequently though third world, low income countries, specifically parts of Africa, Asia minor, and Latin America.

The complex structure of mycobacterium contains 4,411,522 base pairs with 3,924 predicted protein-coding sequences, and a relatively high G+C content of 65.6%. It remains to be one of the most advanced and one of the largest bacterial sequences known. It appears as one circular chromosome and the largest known strain contains 4,293 genes and 56 pseudogenes.. It is an obligate aerobe, meaning that it can only live in the presence of oxygen. It is usually found in the lungs for this reason. The bacterium is a facultative intracellular parasite, which means it cannot reproduce outside the host cell. Mycobacterium tuberculosis can bind directly to macrophages through mannose receptors or indirectly through Fc receptors. Once in the macrophages, in the lungs, the bacterium reproduces. The reproduction rate is 15-20 hours. 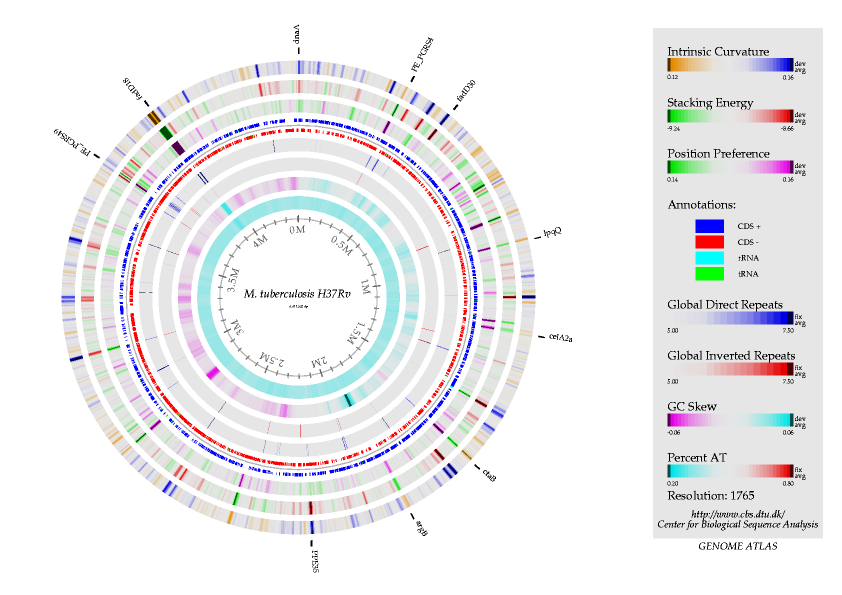 Mycobacteria are rod shaped, gram-positive microbes (caused by it's lack of an outer cell membrane), with the ability to manufacture most of their own needs including production of vitamins and amino acids although they lack the power to metabolize and depend on the host they seek in order to provide the opportunity to process metabolically. In addition to peptidoglycan, Mycobacterium contains a large amount of glycolipids, that make up approximately 60% of the acid-fast cell wall. This causes the organism to grow slowly and to be more resistant to medication as well as other invading immune system defenders. The surface proteins in such a wall help to function as enzymes that power the cell's chemical reactions. The bacterium has neither cilia or flagella, and is therefore non-motile. Its hydrophobic cell wall contains a high concentration of lipids which repels water.Metabolically, M. tuberculosis is obligate aerobic; it requires oxygen to undergo cellular respiration. The Ziehl-Neelsen acid-fast staining procedure is widely used to identify the organism. This method is particularly dangerous because the bacterium must be cultured to perform the gram stain. identification Pathogenic tuberculosis can be identified by observing symptoms in a patient and the common TB skin test. TB bacterium have a life span of roughly twelve to eighteen hours.Its life cycle as a human pathogen begins as it enters the body through the lungs. It is then taken up by the macrophages where it multiplies. The bacterium is then spread throughout the lymphatic system. At this stage, it is either eliminated from the body, or causes the physical disease.

Tuberculosis is suspected to have originated from a soil based disease that infected livestock that became transmittable to humans when those animals were domesticated. Because the virus is spread from person to person, it is easy to see why it spreads the best where people are living in very close quarters, in dirty environments that would place many of one person's germs in a single place for transmission to another human being.A person inhales droplet nuclei, which contain no more than 3 bacilli each.The larger droplets that have been inhaled collect in the upper respiratory tract, including the nose and throat, which is unlikely to cause infection. The smaller droplets, however, may travel down to the alveoli in the lungs. This is the start of a TB infection. The bacterium multiplies in the macrophages until they burst. Other macrophages begin to diffuse to the blood in the surrounding area. These blood vessels cannot destroy TB. The lymphocytes attack. At this point, the person will test positive for TB because of the cell-mediated immune response against the bacterium. The antibody-mediated immune will not control the infection. The bacterium is intracellular and if it is also extracellular it is resistant due to the high lipid concentration in its wall. Inactivated or poorly activated macrophages continue to host the bacterium, which allows them to replicate still. The growing infection can then spread to other parts of the lung, artery, or blood supply. Usually the host will begin to control the infection by this point. The bacteria are picked up by macrophages once they enter the lungs and multiply from there. The virus is lysogenic and can develop into a full infection in anywhere from a few weeks to an entire year once it makes its way into the lymphatic system. The symptoms of tuberculosis in humans include: Persistent cough, fatigue, lethargy, weight loss, loss of appetite, fever, chest pains, and the coughing up of blood. The most common way to test whether or not you are infected with TB is the Mantoux test. A small amount of tuberculin is injected into the arm. After 2 to 3 days, the person will come back to the hospital for a final analysis. The tuberculin causes swelling and/or a bump in the arm. The size of the bump determines if a person is infected with TB. A bump that is 10 mm or longer generally means that you are infected.

WHO is working to dramatically reduce the burden of TB, and halve TB deaths and prevalence by 2015, through its Stop TB Strategy and supporting the Global Plan to Stop TB. 2006-2015

People in jail are at high risk for tuberculosis and the number of people infected is the highest ever recorded in any population.

HIV and AIDS as well as XDR are slowing the process of eliminating TB.

TB is the most common infection in the world. About 1/3 of the world's population is infected and 2/3 of these are in the Asia-Pacific region.

In the 1940's TB was rampant. This was partially due to poor hygine and health standards. Also,at that time there were no effective drugs to cure TB.

A Timeline of Tuberculosis and its Cures

A More Comprehensive And Descriptive Interpretation of Said Timeline

The earliest appearance of tuberculosis in human history dates back to 2698 BC. A Chinese disease named lao-ping that was once well-known as a very deadly disease has been studied and is now thought to be similar to tuberculosis. Mummies from 1000 BC have been studied and determined to have tuberculosis symptoms. It has been known throughout history as a very deadly disease, and as one that is incurable. According to Hippocrates, tuberculosis was the "most grave of all the diseases, the most difficult to cure and the most fatal." The disease wasso fatal at the time of the Greek philosophers around 400-300 BC that Plato stated that " it was of no advantage to themselves or to the State" to treat tuberculosis. In 384 BC, Aristotle confirmed that the disease was contagious. One treatment around 30-50 BC that was believed to help cure tuberculosis was having the patient near the ocean. Years later, in 850 AD, fresh milk was seen as a common cure for people with tuberculosis. A practice called "Touching For the King's Evil" began in the year 1004. In this practice, people with tuberculosis were "healed" by the king touching them. A cure using "balsamic fumigations consisting o frankincense, turpentine and styrax, with coriander and coltsfoot, or other vegetables, made into a powder and burnt on coals" was developed by Christopher Bennett in 1617. Up until this time, it was known that tuberculosis was contagious, but it was unknown how the disease was actually spread from person to person. A man named Pierre Desault saw that the sputum, which is mucus or phlegm, was how the disease was spread. In 1700, Van Swieten suggested that guaiacum resin and an enema of turpentine should be used for tuberculosis patients. These were thought to be used as stimulants to increase circulation and agents for destroying/inhibiting pathogenic bacteria growth. A few years later in 1707, Ebenezer Gilchrist recommended a combination of ‘bleeding, mercurials, and diet.’ Basically suggesting a combination of mercury-based treatment and leaching. The next treatment ideas were to use cod liver oil and inhalation of carbon dioxide, by Thomas Percival; and inhalation of tar vapor, by Alexander Chrichton. Then, in 1859, the first hospital dedicated to the treatment of tuberculosis opened. Then, in 1883, bacilli were first isolated. Soon after in 1891, anti spitting laws were enacted. This was thought to help prevent the spread of the disease. In the early 1920s, H. Elving injected calcium chloride into sick patients. This was found to help. Finally in 1944 Selman Waksman discovered streptomycin. Soon other drugs were also discovered, such as INH, rifampicin and pyrazinamide in 1952. These are treatments that are still used today, with modifications in accordance to bacteria growth.