Difference between revisions of "Mycobacterium immunogenum" 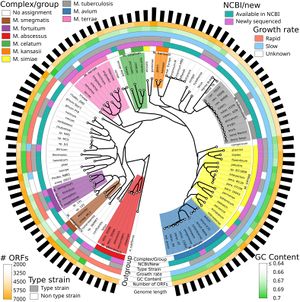 Figure 1. Whole-genome phylogeny of the Mycobacterium genus. Colored blocks of the innermost circle represent Mycobacteria groups based on the phylogeny. M. immunogenum is categorized under the M. abscessus complex. (Retrieved from Fedrizzi et al., 2017).

The genome of M. immunogenum (strain CCUG 47286T) is 5,573,781 base pairs and has a Guanine-Cytosine content of 64.3%. The genome contains two separate ribosomal operons and 61 tRNA sequences [4]. Coding systems that were found in the bacteria included: 109 that are associated with disease and defense and 33 that are associated with antibiotic resistance. A total of 5.484 coding sequences are predicted in the sample [4]. Genomic comparisons with M. tuberculosis and M. bovis have shown that M. immunogenum carries fewer virulence genes than its counterparts. When compared, M. immunogenum lacks a mycobacterium virulence operons which code for Esat-6- proteins, specifically EsxL and EsxK [5]. Genomic similarities with M. tuberculosis has made M. immunogenum a possible vaccine candidate for tuberculosis infections. M. immunogenum shares specific genes for virulence and surface antigens such as Rv0200, which allows for the possibility of animals inoculated with M. immunogenum generating Memory T cells which can prevent infection of M. tuberculosis[5].

M. immunogenum is found in soil, dust, water, and aerosols [3] as well as special niches such as water-based metalworking fluids, a type of industrial fluids for metal, surgical materials [12] and distilled water [13]. The evolutionary explanation for the selective habitat of M. immunogenum is unknown [12]. M. immunogenum grows rapidly on glass, copper, and galvanized surfaces [11]. Growing on surfaces allows M. immunogenum to create biofilms that make it less susceptible to antimicrobial compounds used to disinfect metal removal fluid [1];[7]. M. immunogenum is highly resistant to chlorine and disinfecting agents (2% alkaline glutaraldehyde and 8% formaldehyde) as well as antibiotics, including cefmetazole, ciprofloxacin, doxycycline, imipenem, sulfamethoxazole, and tobramycin [13]. These characteristics allow M. immunogenum to also inhabit water-purification systems such as hospital water systems, causing nosocomial pseudo-outbreaks. Nevertheless, M. immunogenum is susceptible to the antibiotics amikacin and clarithromycin, as well as 5% NaCl at 35°C [13].

There have only been a few reported cases of infection from M. immunogenum over the past decade. As environmental organisms, nontuberculous mycobacteria like M. immunogenum can be found in soil, dust, aerosols, and water [3]. The main sources of infection for the reported cases were from metal-working fluids, contaminated water, and contaminated surgical materials like blades [3]. Those who were infected with M. immunogenum commonly experienced fevers, headaches, hypotension, and visual impairment [3]. However, a majority of cases presented themselves as cutaneous infections [3]. Multiple case reports have described the appearance of leg ulcers and abdominal papules and pustules as a result of being exposed to contaminated water or soil containing M. immunogenum [3][19]. One report specifically discusses lesions forming around a tattoo that the patient had recently gotten, where they found M. immunogenum in the pigment used in the tattoo process [6]. M. immunogenum has been described as opportunistic, as it has been found to target immunocompromised individuals and cause skin diseases ([9]. While a majority of the cases involving M. immunogenum have presented themselves as cutaneous infections, there was also an outbreak of keratitis in Brazil, where M. immunogenum was reported to be the cause. In late 2003, 36 patients received LASIK eye surgery, and five experienced symptoms of keratitis after the operation. After performing corneal scrapings, M. immunogenum was determined to have contaminated the surgical material used in the procedure [8]. Eliminating M. immunogenum from the hospital water supplies has proved to be quite difficult, even with the use of chemicals and heat [9]. Nevertheless, treatment for those infected is quite simple: once a diagnosis is, patients receive antibiotic treatment. In most cases, patients can be treated for a certain period of time with clarithromycin or amikacin, both of which are effective against M. immunogenum as measured in vitro [3]. While patients make a full recovery while on clarithromycin or amikacin, the optimal treatment for M. immunogenum is still unknown.

M. immunogenum is studied as a potential candidate for a vaccine against tuberculosis, caused by a group of bacteria called the Mycobacterium tuberculosis. BCG (Bacillus Calmette–Guérin), the current vaccine, only protects against childhood tuberculosis and not the adult manifestation of the disease due to its inability to sustain the life of memory T cells [5]. In an effort to develop a novel vaccine that would also target the adult-onset of tuberculosis, strain CD11_6 of M. immunogenum was further studied. Genomic analysis showed that M. immunogenum has fewer virulence factors, but is also able to increase the number of activated central and effector memory CD4 T cells when injected into patients [5]. These characteristics of M. immunogenum could possibly mitigate the impact tuberculosis would have on the lungs and the spleen, with increased efficacy of the vaccine to protect against more than just childhood tuberculosis. However, there was no significant difference detected in the impact of tuberculosis between M. immunogenum and BCG immunized groups in the study described above.