A Microbial Biorealm page on the genus Mycobacterium leprae 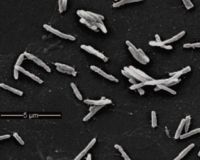 Mycobacterium leprae is responsible for leprosy or Hansen's disease. Cases of leprosy have been recorded as early as 600 B.C. In 2004, The World Health Organization reported that there were 407,791 new cases of leprosy. Leprosy is a serious world issue; in Brazil, India, Democratic of Congo, Tanzania, Nepal, Mozambique, Madagascar, Angola and the Central African Republic leprosy is a major problem. Mycobacterium leprae is an intracellular bacterium, infecting nerve, skin and mucosal cells. In laboratory environments, Mycobacterium leprae is cultured on the feet of mice or on nine banded armadillos due to the inability to culture in vitro.

There are 3,268,203 nucleotides comprising the single circular chromosome of M. leprae. There are 2770 genes within M. leprae. This is composed of coding for 1605 proteins and contains 1115 pseudogenes, primarily genes that were involved in metabolism but genes involved with DNA repair(mutT, dnaQ, alkA, dinX, and dinP genes) and detoxification(peroxidase genes). Many of the pseudogenes were involved in catabolism, the biosynthetic pathways tend to be well conserved. This was likely due to a number of recombination events, deletions and decay. Only 49% of the genome encodes for proteins. There is a 57% GC content. The genome was finished being sequenced in 10/02/2001 by the Sanger Institute.

Mycobacterium leprae is an acid fast Gram-positive bacterium, with a slow doubling time of 14 days. The slow doubling time is due to the restricted intake of nutrients through the pores in the large waxy walls. Mycobacteria have a unique lipid that makes up their membranes that gives them their unique characteristic. The mycolic acids are very large lipids with chains ranging from 60 to 80 carbons long (7). Covalent bonds link these lipids to one another forming a very thick surrounding that is solid at room temperature. This large hydrophobic shell prevents polar molecules, such as germicides commonly used in hospitals, from entering the cell. This slow doubling time is common with in Mycobacteria, it also makes it particularly hard to fight.

Many of the pseudogenes primarily occur in the metabolic pathways. Entire metabolic pathways have been lost to this genomic down sizing. M. leprae can no longer produce siderophores, a key part of oxidative, microaerophilic and anaerobic chains (8). Many regulatory elements of metabolism have also been lost and also many catabolic pathways too. M. leprae has five different membrane proteins that are used to import lipids into the cell. The primary carbon source for M. lepraeis lipids. The most conserved set of catabolic enzymes are those involved with beta oxidations. The primary source of ATP is from the Krebs cycle. The electron transport chain is severely restricted, and isn’t very efficient (9). M. leprae is dependent on the host cell to provide many of the nutrients and metabolites. This coupled metabolism shows how M. leprae has evolved as into a parasitic role. In the laboratory it was found that ideal metabolism (based on ATP synthesis) occurs at 33 degrees C and at a pH between 5.1 and 5.6 (2).

Mycobacteria, as genus, are typically found in the soil, water and in the air. The majority of Mycobacteria are non-pathogenic and non-parasitic. M. leprae is suspected to be found in the soil, but due to the fact that it can not be plated it is hard to conclude that this is the case (17). DNA from M. leprae has been found in several soil samples within areas known to house outbreaks of leprosy. Leprosy is very specified when it comes to infecting hosts. Its ideal conditions are around 33 degrees C, which is lower than most mammals. Mammals with lower temperatures are better hosts for leprosy. That is why only a few species are known to be carriers of M. leprae. This is also why in humans, leprosy tends to be found primarily at the peripheral nerves. Hands and feet tend to be cooler than the core body temperature, providing a more habitable environment for M. leprae (2,3,8).

M. leprae is responsible for the disease leprosy (1). In 2006, there were 219,826 cases of leprosy reported. It primarily affects the peripheral nerves and skin (9). It is also known to affect the central nervous system, mucus lining of the mouth, throat and lungs. Patients often experience numbness, skin lesions, joint pain and weakness. Lesions of the skin can leave individuals physically maimed and socially shunned. The innate immune response to the infection is inflammation. The inflammation in the neural cell causes neuropathy and serious nerve damage. Nerve damage doesn't occur until an immune response happens. The nerve damage quickly progresses to numbness, paralysis and deformity (9). Damage due to the immune response of the host also occurs in lung tissue during Mycobacterium tuberculosis infections. Damage of optical nerves can lead to blindness. Leprosy causes blindness in 3.2% of patients, this type of extreme symptoms occurs when treatment isn't sought (1). The treatments for leprosy are multidrug therapy (1). Unlike Mycobacterium tuberculosis, HIV doesn't change the rate of infection or the severity of the infection of M. leprae. Individuals infected with both HIV and leprosy do not see an increased virulence of leprosy or HIV. This is due to leprosy's long incubation times and slow growth rate. The slow growth rate may allow for the host's immune system to fight M. leprae even with an immunodeficiency (9). Two genes have been identified in producing a resistance to M. leprae infections, PARK2/PACRG in humans and NRAMP1 in mice(9).

Transmission of Mycobacterium leprae is either from infected individual to non-infected individual or from infected individual to environment to non-infected individual (1). Current research suggests that M. leprae that lingers in the environment may be the reason for relapses and epidemics in specific regions. Samples were taken from 15 different villages in the Ghatapur area that had recent outbreaks of leprosy. It was found that 33.3% of the samples contained DNA from M. leprae(12). Another study from the State of Espririto Santa, Brazil, collected 37 nine-banded armadillos and tested them for M. leprae. 11 individuals tested positive for the bacterium, which is almost 30% of the collected individuals. It wasn’t until 1975, that the first case of animal to human transmission of leprosy was reported (10). The number of cases has increased as the demand for armadillo products, such as stuffed armadillos and armadillo skin belts, have become popular novelties. Since 1975 there have been more than 5000 wild armadillos with confirmed cases of leprosy in the states of Arkansas, Louisiana, Mississippi, and Texas (13) 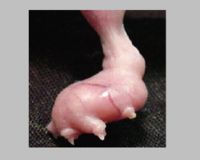 As much that is known about M. leprae, there is very little known about many aspects of it. Its mechanism of infection is one of the biggest mysteries surrounding this pathogen. Recently a gene was discovered that plays a role in cellular infection. The mce1A gene produces a protein that causes uptake into mammalian epithelial cells. This recent discovery shines light on the mysterious infection pathway (14). One area of recent focus has been M. leprae interaction on the cytokine signaling pathway. Cytokines are extracellular proteins that are important for proliferation and maturation of cells. M. leprae interferes with these signals, preventing maturation and apoptosis. This prevents the host from voluntary causing cells to die to remove infected cells (15). Another similar pathway was recently found involving tyrosine kinases. This is another pathway that promotes cellular proliferation (16).

2) [1] Wheeler, P.R. "Metabolism in Mycobacterium leprae: its relation to other research on M. leprae and to aspects of metablism in other mycobacteria and intracellular parasites." International Journal of Leprosy and other Mycobacterial Disease. June 1984. Volume 2. p. 208-230.