Difference between revisions of "Mycobacterium leprae*" 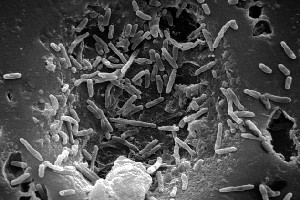 Leprosy has been around humans since 1550 B.C. The ancient Egyptians were the first to record its presence on ancient papyrus scrolls. In 600 B.C. the ancient Indians also wrote about a disease similar to what we know as leprosy today. Historians believe that the disease was spread to Europe via Alexander The Great when he returned to Greece from a trip to India, and then it spread to Rome in 62 B.C. when the Pompeiin troops returned from Asia Minor. Many people believed that leprosy was in fact a punishment sent down by God. For this people with leprosy were shunned by the church. Even after leprosy was proven to be a biological disease, people were still shunned and stigmatized by the public. Leprosy patients even had to wear special clothing and carry a bell to warn others that they had leprosy in Europe. Even today people with leprosy are treated at hospitals different from those normal patients are treated in. Leprosy has been so prevalent in various areas as certain times throughout history that is has inspired art work and influenced other cultural practices.