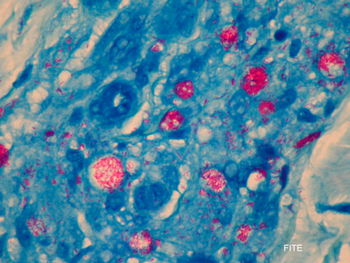 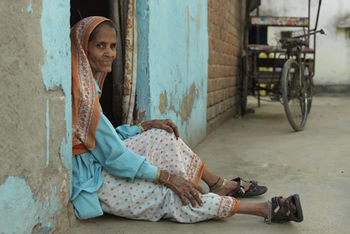 Mycobacterium leprae is a microaerophilic, acid-fast bacillus which causes leprosy. Since Mycobacterium leprae cannot easily be cultured in the lab, much is unknown about the infectious dose, incubation, and transmission of the disease [7]. The infection is thought to be spread through skin and through nasal mucosa. Humans and armadillos are the only known carriers of the disease, though there is some speculation about the possible role of insects in transmission [8]. Mycobacterium leprae colonizes the Schwann cells of the peripheral nervous system, and can also live and grow within macrophages as a way to evade the host immune system [9]. The bacteria express many virulence factors that allow for invasion of the nerve cells and nutritional access. The symptoms of leprosy are associated with the degree of host immune system response to the infection, so the disease is classified according to these varied responses. Polar tuberculoid (TT) leprosy results from a robust immune response, whereas lepromatous (LL) is marked by no host resistance. Borderline categories fall between the two polar forms of the disease. Reactions can then be divided into two types based on clinical manifestations. [10]. Biopsy from a lesion revealing acid-fast bacilli is necessary for diagnosis [7]. The standard treatment for leprosy is a Multi-drug Treatment (MDT) that consists of steroids and antibiotics [8]. Through prevention steps and treatment, the World Health Organization is attempting to eradicate the disease, and has so far succeeded in decreasing the total number of cases. However, the number of new cases each year remains the same despite some positive results from the M. bovis BCG vaccine. Due to the intracellular lifestyle of the bacteria, Mycobacterium leprae infection is associated with symptoms that are the result of the immune system attacking host cells. The bacteria are able to mount an immune response on nerve cells and other immune cells, allowing for inflammation and neuropathy [7]. 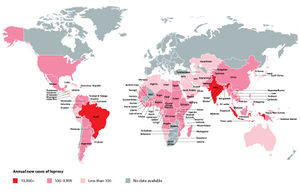 Although some genes from the closely related bacteria that causes tuberculosis have been deleted in Mycobacterium leprae, some iron utilization genes have been conserved to help the pathogen acquire nutrients for growth [9]. NRAMP proteins can be coded for that allow transportation of iron into the macrophage for survival [14].

Bacteria of the Mycobacterium Genus are defined by their waxy exterior coat. In Mycobacterium leprae, the exterior allows for intake into the macrophage and into some dendritic cells. The terminal mannose caps on the waxy mycobacterial ligand, lipoarabinomannan, of the pathogen are recognized by the Pathogen Recognizing Receptor (PRR) of the macrophage to allow for phagocytosis [15].

Leprosy presents with a variety of clinical features based primary on the degree to which the host immune system responds to the infection [7]. In general, the disease leprosy is a result of the immune response to Mycobcaterium leprae invasion of the Schwann cells, which leads to demyelination neuropathy [21]. Common results of the immune response are loss of sensation and disfiguration [9]. Chronic inflammation can lead to this paralysis, specifically along the periphery, and can also affect facial regions, contributing to factors such as blindness [7]. Classification of leprosy is based of a five part system which divides patients by immune response. There are two polar categories and three borderline types which fall between the polar classifications. One polar type is called tuberculoid (TT). This type is marked by a high level of host immune response, delayed hypersensitivity, and bacilli in biopsied tissue. The other extreme is called lepromatous (LL). In this type of leprosy, there is no host resistance. Nodular lesions will form all over body, and when biopsied, they reveal globi, or bundles of bacilli. The remaining three types are borderline categories, being closer to one polar type or the other, or having marks of both polar types. These are borderline lepromatous (BL), mid-borderline (BB), and borderline tuberculoid (BT) [10].

The Lucio Phenomenon is a rare form of symptoms that describes a rapid onset of inflammation of the blood vessel walls and anemia. Typically this rarity occurs in Mexican leprosy patients [22].

Diagnosis is typically made upon recognition of acid-fast bacilli in a skin biopsy of a lesion [7]. As some patients have few lesions, scientists are looking for immunodiagnostic tests to explain neuropathy and other symptoms that may be unaccompanied by lesions [9]. For instance, tuberculoid leprosy (TT) often produces few lesions, so the disease can misdiagnosed. In lepramatous (LL) cases, biopsy should be made from a nerve cell to rule out alternative diagnoses which might show similar symptoms and bacilli in tissue [7]. 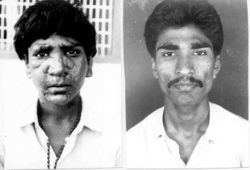 The symptoms associated with Mycobacterium leprae infection, such as lesions and neuropathy, are typically results of the host attacking its own nerve cells through an immune response. While the bacteria can trigger apoptosis in the cells, the body also contributes to cell death by mounting an immune response on the infected cells. Dendritic cells phagocytose the pathogen to stimulate the adaptive immune response through T cells [7]. In tuberculoid leprosy, CD4 T cells are most prevalent, whereas CD8 cytotoxic T cells are in higher numbers in lepromatous leprosy [8]. The T cells, specifically the cytotoxic cells, kill the infected Schwann cells, which results in sensory loss (Spierings). As well, infected Schwann cells and macrophages can be attacked by NK cells [29], [30]. Toll-like receptors (TLRs) also have an important function in the immune response, but specifically for distinguishing between polar types of the disease. Tissue biopsies from tuberculoid patients produced stronger TLRs than the lepromatous type, suggesting that TLRs significantly affect the ability of the immune system to attack invaded cells [31]. TLRs are also associated with the cytokine TNF-α which causes tissue damage in leprosy [32]. TNF-α is produced by macrophages, and is used to stimulate T cell mediated immunity, which causes many symptoms of the disease [7]. The immune system also can work to deter bacteria from adhering to the nerve cells using antibodies directed at the outer coat of Mycobacterium leprae cells [33].