Difference between revisions of "Mycobacterium smegmatis"

A Microbial Biorealm page on the genus Mycobacterium smegmatis 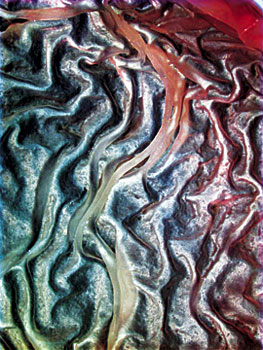 Mycobacterium smegmatis in a biofilm that forms folds in a liquid environment. From PittChronicle article by Donovan and Hoffmann

Mycobacterium smegmatis are mostly found in the soil, water, and plants. Isolates have been discovered in 16 States, Australia, Russia, Canada, and Switzerland. 1. Mycobacterium smegmatis is classified as a saprophytic species that rarely causes disease and isn't dependent on living in an animal, unlike some pathogenic Mycobacterium. The bacteria will be finely wrinkled and creamy white while it is growing on accessible nutrients. When Mycobacterium smegmatis has been growing for quite some time and is abundant, the color will turn from white to a creamy yellow to pale orange. It will also be waxy because of the high amount of unique Gram-positive cell wall coated with mycolic acids. The bacteria also ranges in textures, being seen as smooth, flat and glistening or coarsely folded or finely wrinkled. 12.

Mycobacterium smegmatis on agar medium from Department of Molecular Biology by Dr. Kiesser.

A cartoon of the Mycobacterium smegmatis gene. From NCBI Entrez Genome Website.

A map of the genes from the first 10,000 bp in the genome. From NCBI Entrez Genome Website.

The genome is 6,988,209 nucleotides long. It has a 67% GC content and a 33% AT content, and is therefore classified as a high GC content gram positive bacteria (discussed below). 90% of the genome (6716/6938 genes) represents coding regions that encode for 6716 proteins. The 6938 genes that are composed circularly with an absence of any plasmids. Mycobacterium smegmatis is a slow growing bacteria which contains one copy of the ribosomal RNA genes unlike fast growing bacteria (Eg. Escherichia coli) which has two copies of the rRNA genes. Mycobacterium smegmatis doesn't need so many copies of the genes because it doesn't require the high production of proteins when it is growing slow, while Escherichia coli does. The genome was sequenced in November 29, 2006 by the J. Craig Venter Institute. 9.

Mycobacterium smegmatis is a Gram-positive bacteria, characterized by an inner cell membrane and a thick cell wall. The Gram-positive bacteria is further classified as one with a high GC content and therefore a low AT content. This quality is used as a rude measure of similarity of different species of bacteria. Although this bacteria is Gram-positive, its cell wall contains mycolic acids, long, branched fatty acids that are normally present in Acid-fast bacteria. The acids prevent proper gram staining that would normally identify the cell as a gram positive cell because they create a waxy coating so the crystal violet has difficulty entering the cell, therefore making it seem gram negative. The cell wall is also abnormal because it is irregularly thick for a gram positive bacteria and its hydrophobicity reduces dessication. This feature in addition to its slow cell growth attribute to Mycobacterium smegmatis' low response to antibiotics.

Mycobacterium smegmatis lives in aggregate layers of cells attached to each other in a community called a biofilm. may live in soil and degrade organic materials, including sterols. The bacteria lives in water, and tends to exist near large bodies of water.

However, there has been 1 case where the bacteria has killed a human after infection. In this case, an Italian child was infected by Mycobacterium smegmatis and died at the age of 8. After genetic analysis, it was determined that four nucleotides were inserted, causing a frameshift and a nonsense mutation. The stop codon allowed for a premature stop of translation. Although this showed potential pathogenic properties of Mycobacterium smegmatis, this case required that the child have two mutant alleles in his genome for the bacteria to be particularly virulent. Therefore in most cases, it is generally safe. 5.

Mycobacterium smegmatis has been used to produce Xylitol. Xylitol is an important sugar that is used as a substitute for commercial dietary sugars to prevent tooth decay. It is also a plaque reducer. It is also absorbed more slowly in the bloodstream, so it prevents the negative affects of high blood sugar levels. This is used as a dietary alternative for diabetics. It also has potential treatments for osteoporosis and ear and upper respiratory infections. The D-xylulose sugar produced by Mycobacterium smegmatis is combined with the D-xylose sugar produced by D-xylose isomerase of immobilized Mycobacterium smegmatis to produce the beneficial Xylitol. 6.

Mycobacterium smegmatis uses a terminal oxidase to donate electrons to the final electron acceptor oxygen in oxidative phosphorylation during aerobic respiration. These terminal oxidases have been identified as using both a cytochrome c aa3 type oxidase and a quinol bd type oxidase. When bd type oxidase gene is knocked out to only allow for the cytochrome c aa3 type oxidase to function, the latter didn't attain normal levels of expression of the oxidase. In addition, the oxidase concentration for the knockout didn't reduce during log phase, while the wild type(without the knockout) had decreased oxidase concentration. 3

Mycobacteria smegmatis is also dependent on the import of free inorganic phosphate molecules. Genes that regulate this import are often two component regulatory systems that are composed of histidine kinase and a DNA-binding response regulator. One of these regulators discovered by Dr. Glover is senX3-regX3 2CR. SenX3 acts as a phosphotase and a phosphate donor for regX3. A phosphorylated regX3 will activate phosphate acquisition. RegX3-P is bound to the promoter regions and activates the transcription of senX3, phoA, pstS genes that activate inorganic phosphate import. Therefore this group has determined that the senX3-regX3 2CR system is responsible for regulating this pathway. 4