A Microbial Biorealm page on the genus Mycoplasma arthritidis

Among all prokaryotes, Mycoplasma is the smallest genus that is capable of self-replication. Comparing to other bacteria, Mycoplasma has the smallest genome size, which is about 1/5 size of E. coli. Currently, there are more than 70 species with size range from 0.125-0.82 microns and more than 150 species in total. Mycoplasma has many different structual forms: filamentous, coccoidal, spherical and granular. In fact, the word, "Mycoplasma" comes from its filamentous and branching structures, which literally means "fungus form." Mycoplasma is separated into a different taxonomic group mainly because of its two unique characteristics, which are small genome size and lack of cell wall. This lacking of cell wall provides plasticity, which means that its adaptation to the environment is more flexible. Due to the lack of cell wall, Mycoplasma evolves to form a more well-adavanced cell membrane for its immune response and parasitic nature. Early studies of Mycoplasma were discovered while isolating a species that was a bovine pathogen in 1898. The discovery of Mycoplasma eventually led to the discovery of one of its species Mycoplasma arthritidis. The research on M. arthritidis is still new, and its genome sequence is still in progress. However, its genome size is found to be 840kb, GC content is 31% of DNA, and its habitat is rodents.(1)

Several studies have shown that the ideal pH for M. arthritidis strain 158L3-1 is 7.6-8.0 and ideal tempearture is 37 degrees in Celsius. Further investigations into the metabolic, genetic and physiological property have been progressively explored in animals, plants, and humans. One of the most popular studies on M. arthritidis is the unique features of its surface proteins.(2)

M. arthritidis is found to be quite small in the taxonomic group of Mollicutes. Its genome size is found to be 840kb and the percentage of GC in DNA is 31%. This is coupled with the use of an alternate genetic code where the codon UGA encodes tryptophan, instead of the usual stop codon.(2)

Many cellular features have already been found. M. arthritidis 158L3-1 is a spherical Gram - bacteria. Its arrangement is in singles and it has no endospores or motility. Due to its parasitic nature, there are many unique adhesins and surface proteins, such as MAA1 and MAA2 that are responsible for its capability of attaching to its host cells. See more information in "Cellular structure and metabolism."(3)

For M. arthritidis, it has been found that it undergoes a unique metabolic pathway: tricarboxylic acid cycle. It also has a high arginine deminase activity of 0.65 micromoles per minue per milligram of proteins. This further indicates that it undergoes metabolism in a strictly anaerobic condition.(5)

M. arthritidis highly depends on the media it is growing on. For instance, in fibrous tissue, it tends to create a dense accumulation in the center, which lightens up as it spreads out. It utilizes sugars (glucose, fructose, mannose, maltose, starch, and glycogen), proteins, amino acids of both purines and pyrimidines, vitamins, nucleic acids, pentose and other inorganic materials for growth. If there is a choice for energy, carbohydrate would be its favorite food.(4)

It is quite difficult to understand its mechanism of metabolism, but studies have shown that M. arthritidis has very low activities of pyruvate dehydrogenase complex and pyruvate dehydrogenase. This indicates that M. arthritidis does not undergo the citric acid cycle or glycolytic pathway for energy and synthesis of ATP. (They posses a deficient energy-yielding pathway)(1)

M. arthritidis is famous for its parasitic nature. Mostly, its interaction with other organisms would be parasitic, which means it tends to "feed" off of its host cells. The actual mechanism of how it interacts with other organisms is still unknown. However, further studies have confirmed that the mechanism must have something to do with ligand-binding and cytadherence, which occurs at early infections. More information in Pathology.

In general, Mycoplasma causes many diseases in a variety of hosts, including humans, animals, plants and insects. In this specific strain, M. arthritidis 158L3-1, it mainly attacks the cells in rodents and humans. Evidence has confirmed that M. arthritidis 158L3-1 causes acute polyarthritis and murine chronic proliferative arthritis in rodents, and has a more chronic effect on mice than on rats. Rats usually resolve this disease within 6 to 8 weeks after infection. Once recovered, they are no longer cultivable in joints and further infection will not harm the animals.(6)

In early infection, studies have discovered that MAA1 and MAA2 are responsible for the virulent factors of M. arthritidis pathogenesis. MAA1 and MAA2 are lipoproteins (putative adhesins) that are found on the surface of the cytoplasmic membrane. Strong evidences have proven that they elicit immune responses in rats, which suggests an important role in the disease process (cytadherence).(7, 8) 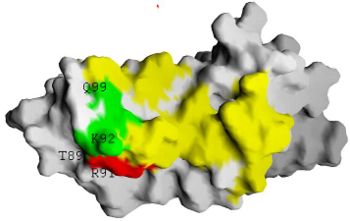 Based on recent research on M. arthritidis, it is difficult to say if it has any usefulness in biotechnology. Since it is best know for its parasitic nature, so far it is known to have no use in biotechnology.

Activities of Oxidative Enzymes in Mycoplasmas. American Society for Micriobiology (5)

Many interests have increasingly shown upon the unique M. arthritidis. The study of M. arthritidis is quite new and many things are waited to be uncovered. So far, one of the most fascinating researches on M. arthritidis would be on its unique parasitic nature. One study by George C. and Gerard J. M. investigated on the oxidative enzymatic activities in M. arthritidis. It is found that M. arthritidis is nonfermantative and may have tricarboxylic acid cycle as its metabolic pathway. This result is based on its response to PDHC (pyruvate dehyodrnase complex) and PDH (pyruvate dehydrogenase), which is shown to have very low activities. This also indicates it's favorable towards anaerobic conditions because of its high arginine deminase activity.

Another study by Alfred et al (1990)investigated the sensitivity of rats to M. arthritidis. The experiment demonstrated that the polyarthritis disease in rats caused by M. arthritidis is somehow associated with the MHC (major histocompatibility complex) hyaplotypes, which is a major genomic region that triggers the T cells in the immune system. Other influences affected by the MHC haplotypes were on an ulcerative dermal coagulation necrosis upon subcutaneous injection of M. arthritidis.

The Sequence of the Mycoplasma arthritidis Superantigen, MAM: Identification of Functional Domains And Comparison with Microbial Superantigens and Plant Lectin Mitogens (9)

Futhermore, Barry et al(1975) demonstrated a cell-mediated immune response to M. anthritidis. The investigation shows that M. arthritidis induces an arthritis that's quite similar to the human rheumatoid arthritis, which is caused by autoimmunity. Additionally, M. arthritidis is found to cause suppression on the humoral antibody responses of rats and mitogenic responses of lymphocytes to PHA, which acts as toxin.

Edited by Wesley Cheng, student of Rachel Larsen at UCSD.