Difference between revisions of "Mycoplasma mycoides"

A Microbial Biorealm page on the genus Mycoplasma mycoides 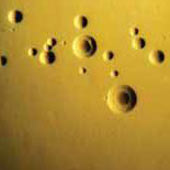 Mycoplasma is a genus of bacteria which lack cell walls. Mycoplasma mycoides is divided into two colony types (large and small) based on their growth and biochemical characteristics. The large colony types (LC) are known to grow larger in broth and mycoplasma agar as well as survive longer at 45 degrees, but are not found to be the cause of CBPP (contagious bovine pleuropneumonia). The LC type was first isolated in pure culture on sheep blood agar plates with lung specimens from a goat. The growth characteristics were of four known LC types, and five known SC types were compared on the sheep blood agar at 2, 5, and 7 days. [7] The SC types were not visible at 2 days and did not grow larger than 0.1 mm, whereas the LC types were visible in 2 days.

Mycoplasma mycoides subsp. mycoidesSC (MmymySC; small colonies) is best known as the cause of bovine contagious pleuropneumonia (CBPP), a highly destructive disease in bovine cattle and goats, and is severe enough that it is included as the only bacterial disease in the World Organization for Animal Health's A-list of prioritized communicable animal diseases. Its genome has been completely sequenced in order to help promote the advancement of new vaccines, drugs, and diagnostic tools for CBPP. It is also the first genome that has been sequenced in the Spiroplasma group of the mollicutes, and the information will help in the study of the evolution of the mollicutes. 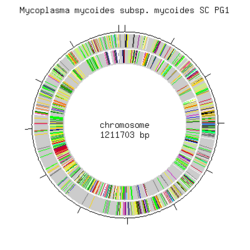 The genome of Mmymy SC type strain PG1T has been sequenced to map all the genes in order to further the studies regarding cell function of the organism and to better understand CBPP. The genome consists of a single circular chromosome of 1,211,703 bp. It has the lowest G+C content (24 mole%) so far out of all the sequenced bacteria reported, and the highest density of insertion sequences (13% of the genome size). The genome contains 985 putative genes, of which 72 are part of insertion sequences and encode transposases. Irregularities in the GC-skew pattern and the presence of large repetitive sequences indicate a high genomic flexibility. [10]

Mycoplasma are bacteria that have no cell wall and therefore have no definite shape. Mycoplasmal organisms are the smallest known free-living life forms and is most likely to have evolved from Gram-positive bacteria. Mycoplasma are can be as small as 0.1 µm and can be seen only under the electron microscope. They are nearly omnipresent in both the plant and animal kingdoms as colonizers and pathogens. Mycoplasmas are unusual among bacteria not only because they lack a cell wall but also that most require sterols for the stability of their cytoplasmic membrane. The sterols need to be acquired from the environment, usually as in the form of cholesterol, meaning that mycoplasmas are always in need of an animal host. [2]

Mycoplasma mycoides are parasites that can be found predominantly in cattle and goat hosts. They rely on their hosts for much of their nutrition mainly due to fact that they have a degraded genome and are not able to perform many basic functions of most bacteria. Contagious bovine pleuropneumonia is spread by inhalation of droplets from an infected, coughing animal. However, relatively close contact is required for transmission to occur. [3] 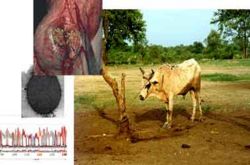 MmymySC is the etiological agent of contagious bovine pleuropneumonia (CBPP), a highly contagious respiratory disease in cattle and buffalo. Courtesy of KTH Biotechnology.

Mycoplasma mycoides use a variety of potential virulence factors, including genes encoding for variable surface proteins and enzymes. Transport proteins responsible for the production of hydrogen peroxide and the capsule sre believed to have toxic effects on the animal. SC type is the cause of contagious bovine pleuropneumonia (CBPP). [10]

CBPP is predominantly a disease of cattle of the genus Bos. However, some breeds are more susceptible to the disease than others. In general, European breeds tend to be more susceptible than indigenous African breeds. Is it also known to cause severe disease in goats as well. CBPP affects many developing countries and is widespread in most of Africa and some parts of Asia, especially India and China. There have been periodic outbreaks within the last decade in Spain, Portugal, and Italy. However, since the nineteenth century CBPP has been eradicated in the United States. [8] Symptoms of acute CBPP involve respiratory distress, cough, confusion, anorexia, and pain in the affected side. Though close contact is required for transmission, the disease is spread by inhalation of bodily fluids from an infected animal. Outbreaks usually begin as the result of movement of an infected animal into an inexperienced herd. The mortality rate is quite varied and ranges from 10 to 70 percent. [3]

Complete genome sequencing of Mycoplasma mycoides (SC) allows it to serve as the model organism for bacterial evolution related to pathogenicity. It is also useful as a model for studying mycoplasmal infections, especially CBPP in cattle and goat livestock.