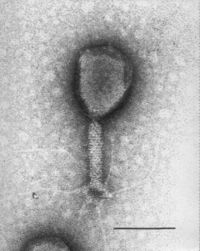 Myoviruses are a family of bacteriophages (from "bacteria" and the Greek phagein, "to eat"), or viruses that infect bacteria. Myoviruses, along with several other bacteriophages, have a "head and tail" morphology that is not found in other groups of viruses. In myoviruses, the tail contracts; this is related to the virus' mode of penetration of the host cell. Bacteriophage T4, a myovirus, infects E. coli. (sources: An Introduction to the Bacteriophage T4 Virus and Microbiology @ Leicester)

Myoviruses are not enveloped and consist of a head and a tail, which are separated by a neck. The head has icosahedral symmetry, while the tail is tubular and has helical symmetry. The capsid that constitutes the head is made up of 152 capsomers. The head has a diameter of 50-110nm; the tail is 16-20nm in diameter. The tail consists of a central tube, a contractile sheath, a collar, a base plate, six tail pins and six long fibers. Tail structure is similar to tectiviridae, but differs in the fact that a myovirus' tail is permanent. Contractions of the tail require ATP. When the sheath is contracted, it measures 10-15nm in length. (source: ICTVdB)

Myoviruses, being bacteriophages, infect bacteria. The most commonly infected bacteria is Escherichia coli. Myoviruses are virulent phages, meaning they do not integrate their genetic material with their host cell's, and they usually kill their host cell. It is difficult for myoviruses, like other phages, to create a successful infection. Because phages are so common, bacteria have developed specific mechanisms to fight off phage infections. (sources: Microbiology @ Leicester and Suttle)