Difference between revisions of "Myxococcus xanthus"

Myxococcus xanthus is a soil bacterium that form cooperative hunting groups. The group swarms through the soil and preys upon other bacteria. Once a bacterium is found, the pack secretes digestive enzymes that release nutrients into the environment that M. xanthus can take up and metabolize. M. xanthus can structure communties by having a top-down effect on the microbial communities and alter the composition of prey species. 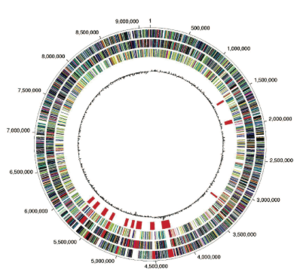 The genome of Myxococcus xanthus was sequenced in 2001 and released to the public. In 2006, The Institute for Genomic Research completed the genome. The complete genome is 9.14 Mb long which is contained in a single chromosome and has a GC content of 69%. The length of the M. xanthus genome is much larger than many other delta-proteobacteria, which may be due to its complex, cooperative lifestyle in its soil environment. The genome encodes nearly 7,500 genes.

Along with completion of the genome in 2006, Goldman and colleagues (2006) examined the genome to see why there was a length discrepancy between M. xanthus and other delta-proteobacteria. By comparing the genomes with other genomes of sequenced delta-proteobacteria, they found that at least 1,500 of the genes were lineage-specific, meaning that they were duplicated and have diverged over evolutionary time. The authors state that more than the 1,500 genes with a lineage-specific, but were excluded due the stringent criteria used in their analysis. Within the lineage-specific gene duplications are genes that code for STPKs, sigma-54 activator proteins, and two-component regulatory systems. 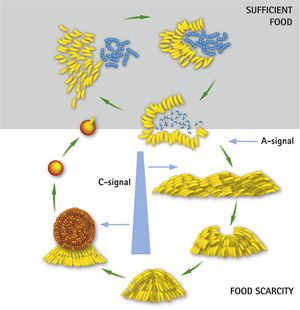 Myxococcus xanthus is a gram negative, rod-shaped, ubiquitous soil bacterium. It is classified as a chemoorganotroph, meaning that it obtains its energy by oxidizing organic compounds. M. xanthus is very abundant in the soil reaching high densities per gram of soil. They are a predatory bacteria that hunt for prey by cooperating to form a groups of cells that swarms through the soil. The group of cells feed on bacteria that they come across by secreting digestive enzymes and feeding on the nutrients.

M. xanthus is an auxotroph for several essential amino acids, including isoleucine, leucine, valine, and vitamin B12 (for the synthesis of methionine), and depends on this behavior to survive and obtain the required nutrients for growth. Pyruvate is the most efficient source of cellular carbon, and most tricarboxylic acid cycle intermediates are less efficient sources of carbon. Studies show that mono- and disaccharides are not efficient sources of carbon-energy. When starved for nutrients the group of M. xanthus cells undergo a develomental change in which the cells form a fruiting body in which contains spores that can disperse and rejuvenate into motile cells when they sense that prey are around. 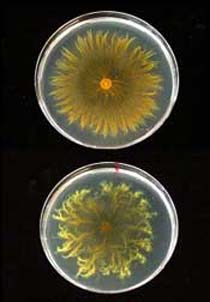 If there is enough food in the environment, M. xanthus will swarm and predate. M. xanthus uses cell-cell interactions to behave cooperatively when hunting for food. Predation of involves the release of toxic and lytic substances that immobilize and degrade prey organisms, thereby creating a public pool of growth substances. Predation involves the secretion of over 300 secondary metabolites, such as myxalamid, an antibiotic that targets yeasts, molds, and enterobacteria.

For decades, M. xanthus has been studied as a model organism for self-organization. Other topics under study are the sporulating proteins of M. xanthus, the genes associated with different motility systems, and the molecules associated with cell-cell signaling.

During predation, M. xanthus secretes many compounds that have antibiotic properties, such as myxalamid. There is ongoing research aimed at genetically modifying M. xanthus to overproduce these compounds in a controlled environment. Also, current research is aimed at the heterologous production of Epothilone B, a polyketide capable of targeting breast cancer cells. Research is conducted on the potential agricultural use of M. xanthus, which can act as a bacterial biological control agent to inhibit pathogenic fungi in plants.