Difference between revisions of "Nano- and Picoeukaryotes"

A Microbial Biorealm page on the Nano- and Picoeukaryotes 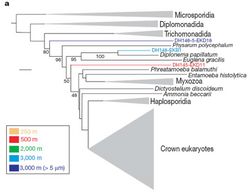 Part of the proposed phylogeny of nano- and picoeukaryotes. The colored isolates represent this surprisingly diverse group of emerging eukaryotes. Image from www.nature.com

No taxonomic placement for these organisms has been solidified as of yet, but researchers are working to determine these eukaryotes' placement on the phylogenetic tree.

New species of eukaryotes are being discovered more as more genes from nature as being mapped; one such category of these recent discoveries are the nanoeukaryotes, eukaryotic organisms which are 2-10 microns long, and the even smaller piceukaryotes, .2-3 microns. These organsims, which are closer in size to bacteria than other eukaryotes, are found to be extremely plentiful in marine environments. Indeed, the vast number which has been found so far demonstrates that this group of eukaryotes could potentially double the number of known eukaryotes in the world.

While no data is available on the genome of these eukaryotes, scientists have sequenced the ribosomal RNA genes of many nano- and picoeukaryotes, yielding 700 base pairs. When compared with the rRNA of isolates from other groups of eukaryotes, it was found that certain strains of the nano- and picoeukaryotes can be placed with many eukaryotic groups. As the graph at the top of the page shows, these organisms were found to fit in with several eukaryotic groups, mainly the alveolates and the heterokonts. In the heterokonts were some isolates of labyrinthulids, which serve as decomposers at deep-water levels. The results of this research has important implications for several scientific disciplines: marine biodiversity has become easier to study because now the difference between prokaryotes and these miniature eukaryotes is more obvious. In regards to phylogeny, the proposed placement of nano- and picoeukaryotes could both stabilize some current branches and require some taxonomic rearranging. 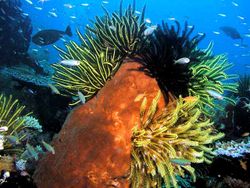 Nanoeukaryotes are located in marine environments all over the world. Image from Island Dreams' Underwater Photography Gallery

At this time too little data has been collected on the nano- and picoeukaryotes to have a concrete idea of their cell structure, energy production methods, and life/reproductive cycle. For the most part, as these organisms are simply miniature versions of larger eukaryotic isolates, it is likely that they demonstrate the same cell structures as their larger relations; for example, those which are fungi-related possess similar methods of metabolism, and those which are found in the heterokonts have the same or similar life cycles. The diversity among these tiny eukaryotes is remarkable, and some may even represent new isolates of heterokonts and other groups, probably a result of endosymbiosis in the extremely diverse marine environment.

Nano- and picoeukaryotes are found in marine environments, including even the extreme temperatures of the Antarctic Sea. They play an increasingly important role economically, as a way to gauge the effect of certain chemicals, such as fertilizers and herbicides, on the marine habitat through the tracking of fluctuations and decreases in the nano- and picoeukaryote population.