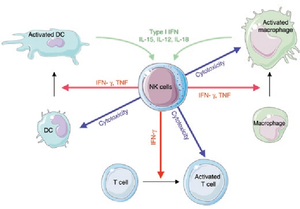 NK cells share a similar cytolytic mechanism of granule-exocytosis[12] with killer T cells where they utilize the two crucial cytolytic enzyme: perforin and granzyme.[13],[14],[15] Moreover, NK cells also induce apoptosis in target cells by the Fas-mediated pathway using the Fas ligands.[16] However, unlike T and B cells of the adaptive immune system, NK cells do not rely on antigen presentation by the major histocompatibility complex (MHC) class I on cells’ membranes to be activated, rather, they utilize a combination of membranal markers to distinguish between the “self” and “non-self” (or “infected self”).[17] This enables NK cells to recognize tumor and infected, especially virally infected, cells without previous stimulation, which resulted in rapid and “natural” cytotoxicity. Apart from the first discovered and well-known immunosurveillance against tumor cellsCite error: Closing </ref> missing for <ref> tag,[18] as well as in early stages of pregnancy.[19]

One of NK cells’ originally-described morphological characteristics was the granules inside their cytoplasm, similar to what seen in macrophages.[1][2] However, later research revealed that these granules bear more similarity to those in stimulated killer T-cells than those in macrophages, and are the effector organelles of cytolysis caused by killer T-cells and NK cells.[20] Granules in NK cells (and also stimulated killer T cells) contain proteins responsible for signaling and facilitating cell apoptosis, the most well understood of which are perforin, granzyme, calreticulin, and glycosaminoglycan.[21] The cytolytic granules also contain Fas ligands, which facilitate the Fas-medicated cytotoxicity of NK cells coexisting with the granule-exocytosis pathway[22], and granulysin but knowledge about its biochemical pathways and significance within the cytolytic granules are limited.[23] 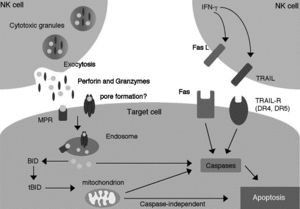 
After NK cells form bindings of their membranal receptors with ligands on the surfaces of their neighboring cells, if the binding cells are recognized as alien, “stressed” or “infected” (target cells), cytolytic granules in NK cells are transported to the site of cell contacts and fuse with NK cells’ membrane to release the cytolytic enzymes into the space between the cells’ synapses. There, perforin creates pores to form transport channels on the target cells’ membrane and other accessory proteins chaperon granzyme into the target cells, where it signals different processes of cytolysis.[24] Exact functions of different types of granzyme, apart from the prominent, heavily studied granzyme B, are yet to be understood.


Fas is a type of receptors on the cell’s surface that belongs to the family of tumor necrosis factor (TNF)[25] commonly highly expressed in cells that are enduring intercellular damages and can induce apoptosis in the Fas-presenting cells when it binds with its specific ligand (the Fas ligand or FasL) on the surface of immunosurveillance lymphocytes such as killer T cells or NK cells.[26] Dormant NK cells contain a significant amount of transmembranal-type FasL in their cytolytic granules on the inner surface of the outer membrane where it is stored differently from the perforin[27] and, possibly, other enzymes of the granule-exocytosis pathway. Once receptors on NK cells recognize alien, infected, or transformed (tumorous) cells, they initiate polar degranulation and release FasL into the synapses between NK cells and the target cells. The FasL binds to the Fas receptor on the target cells, activating a series of caspase enzymes within the cytoplasm of the target cells, which cleave different protein structures in the target cells.[28] There has been evidence suggestive of a DNase activated by caspase, which is a crucial process of apoptosis.[29] The amount of FasL, as well as perforin, within NK cells can also be rapidly increased by the stimulation of IFN-γ[30], a cytokine that is known for stimulant activity on NK cells. The lack of FasL on readily available on the surface of unactivated NK cells is likely to avoid killing of naïve cell types that also have amount of Fas receptor on their surfaces such as hepatocytes.[31] This Fas-mediated apoptosis pathway likely co-exists with the granule-exocytosis pathway[32] as one of the commonly seen redundant phenomena in biology.


“Self – non-self” recognition by NK cells/ The “missing self” hypothesis 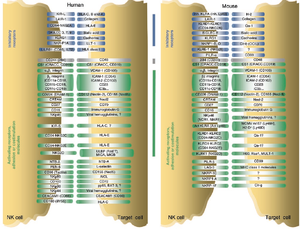 NK cells have a set of inhibitory and activating receptors on their cells’ surface that binds to specific syngeneic membranal molecules (ligands) on other cells’ membranes. A “normal” combination of these binding signals (which was established by a process of NK cell education for self-tolerance [33]) would result in NK cells remaining dormant. However, if NK cells bind to other cells that present an abnormal combination of activating and inhibitory ligands on their membranes, they are activated and release cytolytic signals into the binding cells. This mechanism allows NK cells to specifically surveil for “stressed” or “altered state” cells.[34],[35]

The prominent inhibitory ligand of NK cells that were originally used to distinguish between them and the killer T cells was MHC class I molecules[36] When first discovered, NK cells’ cytotoxicity was said to be non-restricted by MHC.[37] However, it was later discovered that NK cells specifically lyse infected, tumorous or MHC-deficient cells that lack MHC class I on their surfaces [38], which make them undetectable by killer T cells. This gave rise to the “missing self” hypothesis in the 1990s.[39] The hypothesis was later expanded to the “zipper” model of NK cell activation. which includes a range of identified inhibitory and activating receptors and their corresponding ligands on NK cells’ membrane.[40]

NK cells’ coevolution with viral pathogens
A hypothesis has been proposed that NK cells evolved to fill the immunological niche created by the evolution of certain pathogens and tumor cell types to downregulate MHC class I in their host cells (the main way for infected cells to present antigens and signal their “infected” state to killer T cells) and evade cytolysis by killer T cells. Example cases can be seen in murine cytomegalovirus, human cytomegalovirus, HIV and herpes simplex virus.[41] 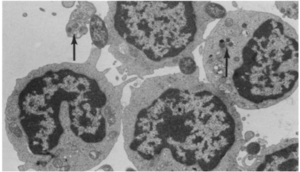 
NK cells antibacterial varies with the species of pathogens and the concentration of NK cells within the testing medium. It has been confirmed that NK cells has antibacterial activity in certain cases against Escherichia coli and Samonella typhi (in vitro)[42], Mycobacterium tuberculosis[43], and Shigella flexneri (in vivo)[44]. Activating receptors NKp30, NKp64 and NKG2D on NK cells’ membranes have been proven to be the main activators in the lysis of intracellularly infected mononuclear phagocytes.[45] NK cells’ antibacterial activity against non-intracellular bacteria is reported to be non-phagocytic and is likely to be caused by secretion of cytolytic enzymes in NK cells’ cytolytic granules based on the granule-exocytosis model discussed above, as NK cells come in close contacts with bacterial cells, obvious bacteria ghosts surrounding active NK cells, and supernatants from NK cell samples possess strong antibacterial quality.[46] However, there is not enough research in vivo on model animals (such as mice) to draw conclusions on the mechanism of this activity outside of the in vitro environment. 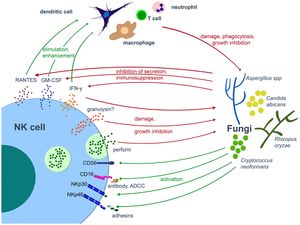 
Researches on NK cells’ response against a number of fungi such as Candida albicans, Aspergillus fumigatus, and Cryprococcus neoformans have proven that NK cells can recognize species in this class of pathogens using their membranal activating receptors (eg: CD56, CD16, and NKp30).[47],[48],[49],[50] Recognition of these fungal pathogens is followed by both direct pathogen cell damage (through granule-exocytosis of perforin[51] and, possibly, granulysin[52]) and stimulation of other stimulator (dendritic cells) and effector cells (macrophages and neutrophils) within the immune system through cytokine secretion by NK cells.[53] Utilization of Fas-mediated apoptosis by NK cells against fungal pathogens has been reported in yeast.[54] But the molecular mechanism of this pathway is still largely unknown, and there is contradicting information[55] about whether Fas-mediated apoptosis has significance in antifungal immunity or not.


Researches have demonstrated the important role of NK cells in defense against certain parasitic diseases, most notably, malaria (caused by the Plasmodium genus)[56], leishmaniasis (Leishmania genus)[57], trypanosomiasis (Trypanosoma genus)[58] and toxoplasmosis (Toxoplasma genus)[59]. Despite the reported phenomena of NK cells’ interaction with and recognition of infect cells (such as the case of red blood cells infected with Plasmodium falciparum[60]), NK cells mainly act as a secondary stimulator in the immune response against this class of pathogens, being stimulated by IL-12 and IL-18 (cytokines from macrophages and dendritic cells), and producing IFN-γ (another cytokine), which causes proliferation of both NK cells and phagocytic macrophages.[61],[62] There have also been evidence suggesting that NK cells’ cytotoxicity has an important role in controlling malaria infection by the strain Plasmodium berghei in mice.[63],[64] Yet, no certain interpretation of this phenomenon can be produced due to insufficient knowledge. 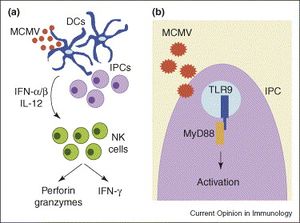 
Past researches have suggested that NK cells play an important role in evading infection of certain viruses such as herpesvirus, coronavirus, HIV, ebola virus, and most prominently, cytomegalovirus.[65],[66] The most elaborated knowledge of NK cells’ antiviral activity is against cytomegalovirus with multiple studies in NK cells’ response against both human cytomegalovirus (HCMV) and murine cytomegalovirus (MCMV) in mice. Infection of cytomegalovirus is characterized by the significant down-regulation of MHC class I on the membranes of infected cells, which helps CMV to evade detection and cytolysis by the killer T cells.[67] Thus, NK cells play a major role in controlling CMV infection, especially at an early stage. This has been demonstrated by multiple researches where depletion of NK cells resulted in a surge in mortality by CMV infection of the host.[68] Apart from their direct activation resulted from contact with infected cells and cytolytic activity against those cells, NK cells are also stimulated by cytokines and chemokines secreted by macrophages and dendritic cells to produce IFN-γ, an important interferon that inhibit replication of virus in host cells.[69] (Figure 9) It has also been reported that MCMV in mice induce a selective outgrowth of the Ly49H+ NK cells (Ly49H is a activating receptor on NK cells’ membranes that can bind to a ligand encoded by MCMV on the membranes of infected cells[70]), which suggests that NK cells are capable of performing a certain level of selectivity in response against pathogens.[71] It has also been suggested that IFN-γ secreted by NK cells can limit replication of mouse hepatitis virus.[72] Moreover, immunization of mice with Ebola virus-like particles showed increase NK cell antiviral activity against this virus, which significantly improved survival of the mice, and these Ebola-sensitive NK cells can be transferred to naïve mice to enhance survival.[73] However, therapies specifically utilizing NK cells against hepatitis and Ebola virus needs further development before they can be tested to confirm benefits on humans.